Myrhorod Citizens Create a New Image for their City 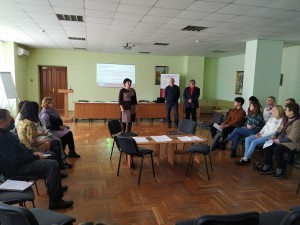 On November 28th, a working meeting on “City Branding Projects” took place in PLEDDG partner city Myrhorod. At the meeting, which was held in the open space format, participants generated ideas for city visualization by various target audiences. The participants were tasked with “growing” the image of Myrhorod through projects ideas that would underpin the city’s marketing strategy. In their creative process the participants were assisted by PLEDDG consultants.

Natalia Hyrka, City Council Secretary, opened the meeting. Natalia Oleksiivna expressed her gratitude for active citizenship and Myrhorod citizens’ personal involvement in the further development of their city. She noted that the present-day life incited to develop a high-quality marketing strategy aimed at raising tourists’ interest in the city and consolidate city residents in the common movement towards development of their native land. Natalia Hyrka also expressed her gratitude to PLEDDG Project for the assistance in elaboration of the “Myrhorod Subregion Development Strategy until 2028” and support in the process of development of other economically relevant city projects.

The participants included representatives of the deputy corps, NGOs, businessmen, students, and high schoolers. They were generating ideas for revival of the official brand of Myrhorod and were sharing ideas for promotion and advancing of the city’s brand as well as stood up for importance and significance of each opinion. PLEDDG consultants Volodymyr Proskurnin, Dmytro Konyk, and Project Regional Coordinator in Poltava region Iryna Dudka gave prominence to high participants’ performance activity during the creative session. The feasible ideas put forward by Myrhorod citizens would be incorporated into the city marketing strategy. Natalia Hyrka thanked the participants and assured that she would defend the citizens’ sensible suggestions on Myrhorod brand development before the deputy corps when adopting decisions.