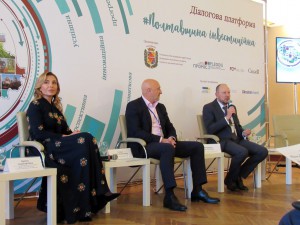 – This event is a follow-up of the last year’s economic forum that showed opportunities and potential of Poltava Region. Today we show what changes have taken place in terms of economic indices of the regions and amalgamated territorial communities, we share experience in development of investment attractiveness of territories and investment promotion, – Valeriy Holovko said. – We see Poltava inside and outside Ukraine at a different angle. Now, our land is viewed not as agricultural one only anymore. It has a sufficiently high industrial potential. At the same time, we have also enhanced the work as well as augmented the indices in agricultural sector. Infrastructure is developing either. Investment projects are being implemented and keep being executed.

Valeriy Holovko expressed his gratitude to the representatives of amalgamated territorial communities that develop their territories and create conditions for business activity.

– Poltava Region shows significant success in many areas. One of the key components of its success is investment attractiveness of the region. The region’s head Valeriy Holovko who pays significant attention to respective problems personally pursues this issue. Poltava Region ranks number five among the regions with accumulated investment amount of more than billions of US dollars at the initial stage of investment. This is quite a significant indicator. Not all Ukrainian regions can boast of such data. We create a favourable investment climate not only at regional level but also throughout entire country. Poltava region concentrates 245 investment enterprises in its territory that accumulate investments from 43 countries of the world. Today, we would like to demonstrate as in the case of our cities, amalgamated territorial communities, how it is possible to enhance investment attractiveness of the land, – Inna Ischenko explained.

She reminded that the region had the investment portal (http://plobl-invest.gov.ua/). It was developed last year and now it functions efficiently. Besides, as part of the event, Inna Ischenko presented investment passport of Poltava Region. It represents the advantages of the region and applied investment proposals for potential investors. They include, in particular, an open base of land lots and free industrial enterprises that can be purchased or leased out. Inna Ischenko noted that Economics, Trade and Investment Attraction Department of Poltava State Administration provided amalgamated territorial communities with assistance in development of their investment passports.

– Today, representatives of communities travel throughout many places of Ukraine adopting practices of the colleagues from abroad. So they have to promote investment potential of their regions, raise additional resources and be open to cooperation, – Inna Ischenko added. – Poltava region has a range of investment advantages. They include, among other things, advantageous geographical position, powerful industrial and agricultural complexes, and human resources. In addition, our region is a territory for comfortable living: there is a great number of health facilities and institutions for culture, art, and recreation. Poltava region is a unique place. It is of the same level as millionaire cities are. Due to investment and economic component, we build the State Budget of Ukraine. We are the first region in terms of financial self-sustainability. We have enormous economic potential. In the region, there are the enterprises of machine-building industry operating powerfully, and well-developed extractive industries. The amalgamated territorial communities of the land are developing efficiently too. For instance, Scherbanivka amalgamated territorial community ranked number one broken down by the indicator of economic efficiency among all Ukrainian communities.

Inna Ischenko informed that Poltava Region was an export-oriented region. It made the top five exporters of Ukraine.

– We supported the initiative of the regional state administration to conduct a dialogue platform for investment attraction. This is a highly important issue as no any territorial community can live without investments, none of the regions. A level of economic development of the territories and their residents’ welfare depend on their attraction. We have already supported the initiatives at the level of the region and partner cities. We will keep supporting them. One of the areas of our activity is to support the investment attraction processes. It is very important to understand that the world is going more globalized, whereas the regions significantly compete for people and investments. So, the region which is ready to attract them will work in the respective direction and will become a winner in a competitive struggle. We wish it were Poltava Region namely, – Ihor Lepyoshkin,
Senior Expert, Head of Experts Group of “Partnership for Local Economic Development” Project (PLEDDG), said.

In the framework of the forum, the winners of “Poltava Region Horizons” competition received awards.