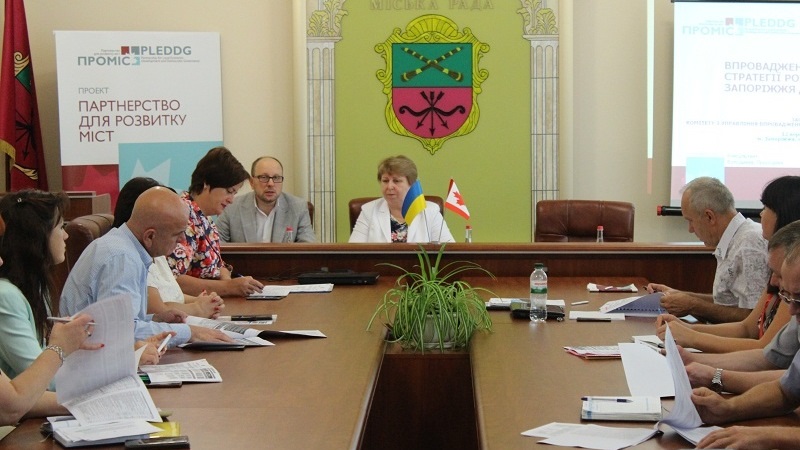 The main issues discussed at the session included the procedure for implementation, monitoring and fulfillment of the action plan on implementation of the City Development Strategy. The event was chaired by Valentyna Malysh, Zaporizhia Deputy Mayor.

It bears reminding that 2028 Zaporizhia Development Strategy was developed in the framework of cooperation with the international technical aid project “Partnership for Local Economic Development and Democratic Governance” (PLEDDG Project). The document was prepared by the members of Coordination Council on Elaboration of the Zaporizhia Development Strategy through city community representatives by means of discussions held during 2016-2017. Prior to creating the project, there were carried out the studies in the field of economy and other areas of the city development as well as public opinion research. The Strategy focuses on several priority areas of the city development. Primarily, it concerns renewal and conservation of the city’s environment, which is safe for life, improvement of competitiveness of economy, development of the infrastructure and tourism, and improvement of the citizens’ quality of life.

The problem, which I see today in action plan for implementation, is that the strategy provides for quite large facilities requiring considerable funds. Understanding the process of budget formation for 2019, we know full well that we are going to experience the lack of funds. Nevertheless, today, the Strategy is a basic document which main budget funds administrators have in place and with which they shall shape their budget program, – Valentyna Malysh said.

During the event, it was decided that the sessions of the city executive committee on management of implementation of Zaporizhia Development Strategy would be held not less than once a year. Throughout three years, PLEDDG representatives will be able to provide advice and information support related to implementation of the City Development Strategy.