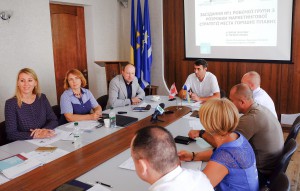 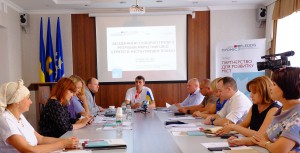 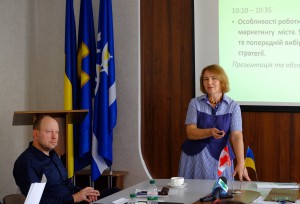 On August 6, the first session of the task team on development of Horishni Plavni Marketing Strategy was held in the premises of the Horishni Plavni City Council, in which PLEDDG Project experts took part. Such collaborative work was aimed at creating Horishni Plavni’s brand, which would enhance the city’s attractiveness, increase its competitiveness as well as investor and tourist appeal.

Welcoming the participants, First Deputy Mayor Oleksandr Chupryna stressed on the necessity to develop a marketing strategy and wished them a fruitful work. “Marketing and branding of cities is a widespread practice around the world, in which Ukrainian cities are now actively involved. The task team is intended to build Horishni Plavni’s brand, which will help us to effectively use and promote the city’s potential, attract additional funds to the economy and improve the living standard”, – Task Team Deputy Head and Deputy Mayor Yurii Mukha said.

In the course of the session, the task team members considered the special aspects of marketing and branding of cities, discussed the challenges of Horishni Plavni positioning under present-day conditions, identified the strategy’s target audiences and untapped resources for the city’s image-building. At the first session, PLEDDG Project consultants presented a roadmap for development of Horishni Plavni Marketing Strategy, consisting of two stages: city positioning and marketing communication. It is planned to hold 3 sessions together; the marketing strategy shall be finalized by January 2020.

At the conclusion of the session, Ihor Lepyoshkin, Senior Expert, Head of Experts Group, summed up: “I think that we have performed well working together today, we have achieved our aim and mutual understanding on the city’s image-building needs and outlined the further steps of our activity. I am grateful to the task team members for their ideas and good work”.