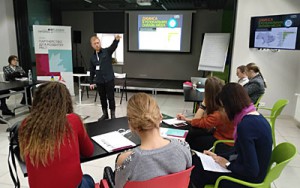 Ukraine needs trustworthy and reputable journalism both at national and regional levels. IMI’s representatives joined a training session for journalists from Vinnytsia region to discuss the largest challenges and problems of the profession arising ahead of elections.

IMI’s media expert and StopFake fact checker, Olena Churanova, and IMI’s representative in Vinnytsia region, Anton Bulhakov, took on training duties in the joint project of PLEDDG (“Partnership for Local Economic Development and Democratic Governance”), Institute of Mass Information, and StopFake.org – “Trustworthy and reputable journalism: new and conventional media technologies and local government reporting”. Together with media specialists of the city and region, the experts discussed the largest ethical challenges the professionals were facing as well as local peculiarities and problems. Thus, the most difficult problems named by the participants of the training were as follows: low level of critical thinking, journalists’ lacking education, shortage of experts, popularity of “waste tanks” (websites containing tabloid, poor quality news – editor’s note), dependence of mass media on their owners, infringement of balance and accuracy standards, etc.

“In fact, the problems and challenges Vinnytsia journalists are facing are not unique ones”. They are common for Ukrainian journalism on the whole if one has a look at the report of JEC (The Journalism Ethics Commission – editor’s note), following the results of regional discussions. Nonetheless, it is of great importance not only to identify those problems, but also to seek solutions, establish principles which infringement is inadmissible for regional journalists”, – Olena Churanova said.

The IMI’s representative in Vinnytsia region Anton Bulhakov also reported on risks for journalists arising in the course of their work in Vinnytsia region. In particular, he noted that for over 2017-2018 the regional courts adopted only one decision pursuant to Article 345-1. Another aspect, apart from safety, which concerned quality of publications and existence of paid journalism in local mass media, was reported as well, based on 2016-2018 IMI analysis.

Also, on February 4-5, the Vinnytsia region journalists will listen to fact checker and editor of the StopFake.org Spanish language version, Alina Mosendz, and editor at Codastory, the investigative reporting website, Simon Ostrovsky, and will take part in the trainings on fact checking and fake news identification.