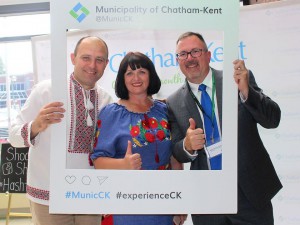 The Municipality of Chatham-Kent is hosting 13 mayors from the Ukraine on Thursday and Friday as part of an international study tour organized by the Federation of Canadian Municipalities for newly elected heads of Ukrainian amalgamated communities. The Ukrainian mayors and several members of Chatham-Kent council posed with the Ukrainian flag before it was raised at the Civic Centre in Chatham on Thursday. (Ellwood Shreve/Chatham Daily News)

The visiting mayors of 13 Ukrainian communities have a shared experience with Chatham-Kent – going through amalgamation.

Mayor Darrin Canniff said this group of Ukrainian mayors is just now going through the process of taking a number of small communities and merging them.

“They’re coming here to learn a lot about what we’ve done through our experience with amalgamation,” he said.

Chatham-Kent is one of two communities in Canada that was selected to have a delegation visit, with the other being Prince Edward County in southern Ontario.

“The federal government recognizes what a wonderful community we are, and we’re going to show them around and how our municipal politics works here in Canada,” Canniff said.

Oleksander Korinnyi, mayor of Novoukrainska, which is 12 communities that amalgamated in March 2016, said the amalgamation reforms from his part of Ukraine are similar to Chatham-Kent’s experience.

“But, we didn’t have so much time to go through all of this compared to your country,” he said.

“Unfortunately, our north neighbour, Russia, which is (an) aggressor and (President Vladimir) Putin, this is why we have to become stronger, very fast and we’ll do it with Canadian help,” Korinnyi said.

Canniff said Chatham-Kent officials spent much of Thursday morning talking with the Ukrainian mayors about what was learned from amalgamation, along with discussing the local political system.

“One of the differences I’ve already noted is that the mayor over there is also the administrator,” said Canniff, explaining how they’ve merged the role of mayor with chief administrative officer.

Korinnyi said the involvement of the public in the decision-making process and the accompanying transparency was highlighted during the visit.

“We just started to do this process,” he said. ” A lot of useful and interesting things were said about the community management, about the governance of the community.”

There was also a lot of discussion about the issues and difficulties encountered by Chatham-Kent during amalgamation, Korinnyi said. 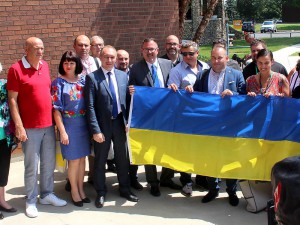 “I hope that we will be able to use this useful information to avoid those mistakes in our communities,” he said. “We’ll be successful very soon, and I’m sure both of our countries will become good partners and strong partners in the very near future.”

Canniff said there is about 20 places across the municipality, from water and wastewater infrastructure to area beaches and RM Automotive, they plan show the Ukrainian delegation before they leave later in the day Friday.

“We’re getting them to virtually all the larger communities in Chatham-Kent to see what it’s all about.”

Canniff said an added bonus is the federal government is sponsoring the visit, “so it’s not costing taxpayers here.”

As for potential economic opportunities, the mayor said it was “something we’re just learning right now.”

Canniff noted all the Ukrainian communities represented are focused on agriculture, “so there’s certainly opportunities there to share knowledge and work together.”

Olena Kinash, mayor of the Solonianska amalgamated territorial community, is glad to be part of the delegation.

“I like it a lot and I’m very happy that we are here,” she said, adding they received a great reception from Chatham-Kent. “This is my birthday today, but I feel like I’m at home.”