Canadian Spirit of Support in Khorol 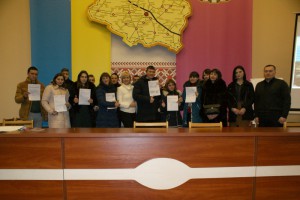 Combating poverty is a priority task for the Government of Canada. And not in their country only but also in the wider world, Ukraine including. The Ukrainian expatriate community in Canada is nowadays the biggest one. Canada has the world’s third-largest Ukrainian population behind Ukraine and the Russian Federation. The Canadian Ukrainians are the largest Slavonic diaspora in Canada, and according to the 2011 statistics, is the ninth language and ethnic group in terms of number in Canada, making up about 1.3 mln persons.

One of the most effective and efficient Canadian projects is an international technical aid “Partnership for Local Economic Development and Democratic Governance” (PLEDDG), which seeks to strengthen the municipal sector in Ukraine. The Federation of Canadian Municipalities (FCM) has been implementing PLEDDG Project since April 2015. The project is funded by Global Affairs Canada.

The geography of PLEDDG partner cities is gradually expanding and acquiring wider contours: 16 cities from Poltava, Vinnytsia, Zaporizhia and Ivano-Frankivsk regions have joined the Project.

As a local governance body, Khorol City Council considers the support given by Canadian people towards development of municipal sector of economy, in particular, in the sector of small and medium sized businesses, appropriate and relevant. For this, seminars and trainings are being conducted in the city with support of the Regional Entrepreneurship Support Fund in Poltava region. This is an effective instrument for implementing a joint project of the Federation of Canadian Municipalities, Association of Ukrainian Cities, and Khorol City Council.

Such seminar-workshops have been already conducted this year (on January 17, 23, and 24), attended by Khorol citizens of various category and from various civil society institutes: students, lecturers, women entrepreneurs, people registered at Khorol District Branch of Poltava Regional Employment Center, and also those who have become interested in entrepreneurship and attracted to the business world.

The liveliest were the situated exercises, with participants divided into groups. A team-based method is the best one for learning practical aspects of modelling small entrepreneurship business processes optimization.

The most interesting and motivational was the lecture on overcoming “glass ceiling” phenomenon by Ukrainian women in business, a topical issue for everyone in any life situation. The “glass ceiling” effect is an invisible psychological obstacle which does not enable a woman to have a career promotion based on her efforts made. The essence of the psychological pattern lies in that we see everything around us, have a good understanding, analyse, but cannot clear the glass barrier which makes us isolated and shackled. Therefore, it is important to believe in ourselves, think big and see opportunities, trying to break this glass rock, to overcome obstacles, to act and to achieve.

Many thanks were given to the organizers and participants of the event, that ensured implementation and activation of entrepreneurship initiatives in our city. We hope that theoretical knowledge and practical skills acquired by them will prove useful and help the three-day seminar’s participants to fulfill themselves. We call for Khorol citizens to take a more active part in various practical, informational and educational events offered at no cost. Follow the news reports and announcements of the city council, keep abreast of the events, and learn together with us! Education has no age limits and is always essential for personality development and professional growth.