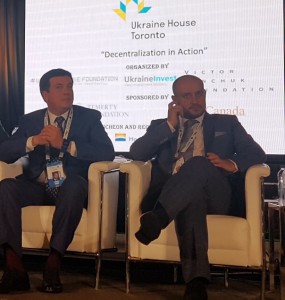 Since July, Ukraine Reform Conference in Canada has continued its activity in Ukraine House, Toronto. The participants were offered to work in ten themed panels.

Ukrainian communities’ representatives took part in some sessions, namely in “Decentralization in Action”. In the course of the panel, they discussed the most important structural reform ever since Ukraine gained its independence in 1991: a transfer of the powers and resources from central power to the self-governance level. At the session, the representatives of Ukrainian municipalities as well as of the newly created amalgamated territorial communities spoke about deep transformations taking place to foster development and investment attraction to Ukrainian regions and making an overall impact on the country.

The Association of Ukrainian Cities, which has represented and protected the local self-governance interests nearly for thirty years, is currently in the process of development of their proposals as to necessary amendments, normally not waiting for the central power decisions and thus setting an agenda independently. For instance, the Board of the Association of Ukrainian Cities approved a respective Local Self-governance Reform Concept as early as in 2011. Thereafter, when a “window of opportunities” opened after the Revolution of Dignity in 2014, the Vice-President of the Association Volodymyr Groysman joined the Government with the only goal: to implement decentralization reform. 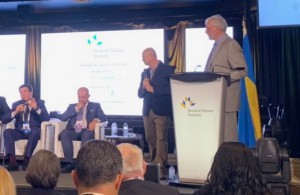 We put forward a range of legislative steps then in order to bring it to life. First of all, we made efforts to convince the central authorities of that the changes should first of all concern Budgetary and Tax Codes. It was particularly necessary for the citizens to receive a resource which they could have at their disposal and to believe in reforms after many years of disbelief. Therefore, the first stage of the reform was budget decentralization, which fundamentals were also developed in AUC.

Moderating the panel discussion, Brok Carlton, Executive Director of the Federation of Canadian Municipalities, noted that the Association of Ukrainian Cities used Canadian experience in the course of development of that reform, especially by introducing local excises, just after AUC’s delegation to Canada made visits to FCM General Meeting.

As a co-author of the amendments made to budgetary and tax codes applicable to budget decentralization, Oleksandr Slobozhan expressed his gratitude to the Federation of Canadian Municipalities for their cooperation.

He also reported that AUC was working with citizens through 24 regional offices in all Ukrainian regions. Newly created amalgamated communities, which needed assistance and support, were being paid special attention. The priority areas included education and advanced training for local officials, provision of legal support and advice, accumulation and communication of best practices.

AUC fronts for the local self-governance interests at the central power level, speaks with a single voice on behalf of communities in its dialogue with the Government and the Parliament, and joins the legislative activity. For over 27 years so far, the Association has been an author and a co-author of 244 draft laws on activity of local self-governance bodies.

Presently, the main tasks include capacity building of local self-governance, which would be able to provide high quality services to citizens. For this, AUC cooperates with PLEDDG Project for creating a range of strategies aimed at local economic development, branding and marketing of Ukrainian communities, professional development of local officials, and ecological assessment of urban development.

Another important area of cooperation between AUC and PLEDDG Project is implementation of the grant scheme for local NGOs, which is a call for short-term initiatives aimed at promoting women participation in local economic development. Due to the scheme, the civil organizations are learning how to write projects and are engaged in development of their communities.

Currently, Ukraine experiences an “earthquake action” effect: the new President, a new Parliament is going to be very soon, and no one knows what the Government is going to be. This gives rise to new challenges to implementation of decentralization reforms.

As far as communities per se as well as political elite concurrently act as stakeholders of the decentralization reform and as its immediate participants, AUC addresses its activity to both target audiences. Therefore, by implementing the Project USAID PULSE, the Association cooperates with government and parliament representatives efficiently, fronting for development and implementation of reforms. Other AUC’s projects are addressed to the issue of support for communities and enhancing their capacity.

I would like to point out at that amalgamating communities are not an ultimate goal of the reform, they serve as its instrument only. Amalgamated territorial communities are viewed as temporary structures, something like building wood based on which an efficient self-governance is being developed. These communities become cities in the long run, obtaining the same powers, incomes and expenditures.

Currently, AUC numbers nearly 800 members, where half of them is made up of amalgamated communities that need a special approach. That is why we have integrated the work with amalgamated territorial communities and for amalgamated territorial communities into our activity, and we welcome creation of regional associations, which, similarly to provincial associations of Canadian municipalities, will enhance a single voice of local self-governance in the dialogue with the Government, – Oleksandr Slobozhan said.
﻿