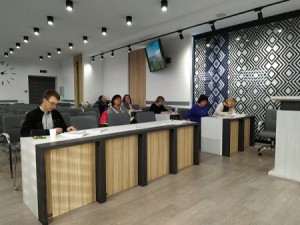 These very questions were put to the agenda of the extended session of Advisory Committee on Effective Governance and Development and the Committee for management of Ivano-Frankivsk Strategy implementation, held on November 5, 2019.

The Head of the Department for Economic Analysis and Strategic Planning of the Office of Economic and Integrational Development presented the results of the City Development Strategy implementation for the І half of 2019. The information is available on the official website of the city.

As far as Cherniiv and Pidluzhzhia joined Ivano-Frankivsk City Council the necessity of taking into account community’s needs appeared. Such proposals on adjustments and amendments to the existing Implementation Plan for 2018-2020 City Development Strategy were discussed at the session.

The progress of implementation of 18 initiatives and projects which have impact on the city development as well as key priorities to ensure their further sustainability were discussed.

18 initiatives and projects under the support of PLEDDG have been launched and implemented for the last two years in Ivano-Frankivsk, with some of them being unique. The Advisory Committee members discussed the success of such initiatives and ways of their improvement, with sustainability of their results being ensured.

The initiatives and projects that were being implemented with PLEDDG Project support are the following:

and many other initiatives and projects.