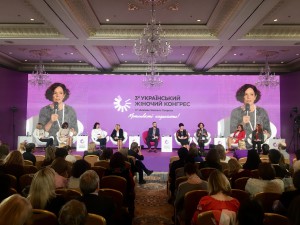 On December 10-11, Kyiv hosted the main event in the field of gender equality policy in Ukraine – the Third Ukrainian Women’s Congress. PLEDDG is one of the permanent partners of the event.

Every year, the event brings together representatives of business, public, government as well as foreign experts to discuss topical issues of economic and political empowerment of women in Ukraine.

Supporting women’s leadership in local government and active involvement of women in governance and economic development are among the fundamental principles of municipal government in Canada. That is why at the invitation of the Federation of Canadian Municipalities the Congress was attended by Canadian Senator Donna Dasko and the Borough Mayor, Côte-des-Neiges–Notre-Dame-de-Grâce, a member of the City Council of Montreal, Canada, journalist Sue Montgomery.

Our democracies are stronger, better and fairer when we elect more women to our parliaments and governmental bodies- Senator Donna Dasko said in her speech.

During the event, participants discussed such important topics as the equal access to political and economic participation, involvement of women in the security and peace building sector, countering gender-based violence, overcoming stereotypes and strengthening gender education and upbringing.

The Ukrainian Women’s Congress is a unique platform that triggers productive dialogue on expanding representative governance in Ukraine at all levels of public life.

You can find more information here:

Five Years and Counting: The City of Berdyansk Continues to Allocate UAH 1.5 Million to Its Participatory Budget