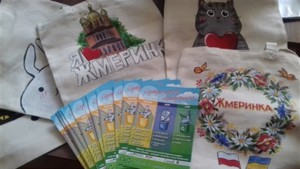 The artworks made by talented members extracurricular activity center and local artists’ exclusive works exhibited both at the art-gallery of the municipal history museum and at the children’s music school art studio: not only could the walkers take a look at illustration techniques used, but they also could take part in the masterclasses.

Along one of the walkways at Myru Square, an environmental action was taking place: the passers-by were welcomed to paint a linen tote bag by themselves and then take it as a gift. The specialists from Zhmerynka City Council Economic Department had stocked up on bags for all comers, as part of the project “Solid domestic waste separation is a key to clean Zhmerynka” implemented with support from PLEDDG Project.

As reported by the city council officials, the aim was to attract public attention to a possibility of reducing the use of polyethylene-containing products by replacing them with a good alternative – tote bags, which may come in handy for household needs.

The tutors from the music school art department and extracurricular activity center helped Zhmerynka citizens to realize their bright ideas of a tote bag design.