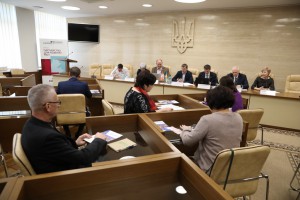 A task team on development of the Strategy of investment attraction to Zaporizhia region’s economy continues handling proposals and making amendments to the draft document.

Today, at the fourth session, chaired by Artur Boyko, Head of Department of Foreign Relations and International Economic Activity of Regional State Administration, both the draft Strategy of investment attraction and a Plan on implementation thereof for the period of three years were presented.

– Our colleagues from Ukraine-Canada Project “Partnership for Local Economic Development” (PLEDDG) gave us enormous support and assistance in drafting the Strategy. Actually, they performed not only as moderators, but also prepared a document which would be further used as methodology for investment attraction. The task team members gave us very important proposals and comments: some of them became underlying for the action plan on implementation of the Strategy, and some became a part of priority or vital areas in each sector. The draft Strategy contains more than 150 pages, and now we are going to present the selection of key priorities, objectives, and tasks, – Artur Boyko reported.

PLEDDG Project Consultant, Coordinator of All-Ukrainian network of experts and practitioners on regional and local development REGIONET, Oleksandr Dudka said that implementation of the Strategy of investment attraction to economy of Zaporizhia region should ensure increasing inflows of all investment types. Diversity of the sources and forms of investment attraction requires from investment activity organizers to have relevant versatile theoretical knowledge and practical skills.

After the draft Strategy of investment attraction to economy of Zaporizhia region and Plan for its implementation for the upcoming three years had been discussed, the task team members approved a roadmap for further period.