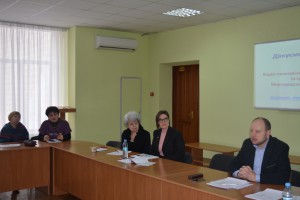 On February 14, 2019, PLEDDG team visited the Project’s partner city Myrhorod. At a working meeting, attended by PLEDDG Senior Governance Advisor Kadie Ward, the first results of the implementation of the Myrhorod Subregion Strategy were discussed.

The Myrhorod Subregion Strategy is a document that is working. Such conclusion was made by PLEDDG experts after they learned about the results of the implemented projects, which made quite an impact on the city’s development. During the analysis of the performance outcomes, the stable and consistent work of the city council, deputies, and proactive Myrhorod citizens was acknowledged. In the course of the discussion, both objective and subjective reasons restraining the execution of the Action Plan were discussed. Moreover, based on established assessment criteria, the stability of implementation results of initiatives and projects was discussed and assessed in small groups.

Summing up the outcomes of the session, Natalia Hyrka, City Council Secretary, expressed gratitude both to PLEDDG experts for their assistance in developing the document and to active task team members for their direct participation in the implementation of the Action Plan under the Myrhorod Subregion Strategy.