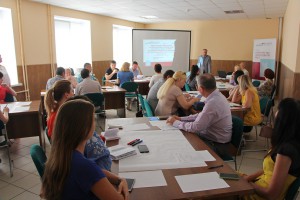 A meeting on “The Concept of Poltava Brand” (or how to position an up-to-date image of the city worldwide) took place as part of the project “The Development and Implementation of Poltava Marketing Strategy”. During the session the task team members were generating ideas to be used further by PLEDDG to create a city brand.

On September 10, the Community Center press room hosted a creative and interactive session on the city’s brand development. This time the task team members were working in the “World Cafe” format. This method was chosen for good reason, as it is effective in the cases when participants have to outline their positions on a specifically defined topic under time-limiting conditions.

During 7 hours the teams followed a clear plan: first, they chose a leader, – then, they had several stages of discussion, with some participants switching tables periodically, whereas the final stage presupposed the presentation of the generated ideas as such. All the developments will be used by professional designers when creating a brand.

The project “The Development and Implementation of Poltava Marketing Strategy” is being implemented with support from PLEDDG Project, which is implemented by the Federation of Canadian Municipalities and funded by the Government of Canada.

it is to be recalled that an intensive activity on the city’s brand and slogan creating has begun in Poltava. Adoption of the Marketing Strategy is scheduled for January 2020.