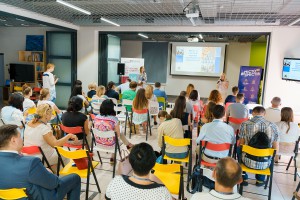 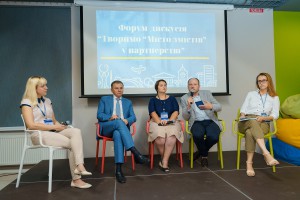 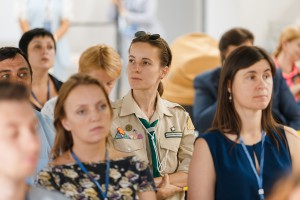 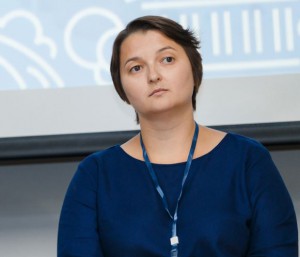 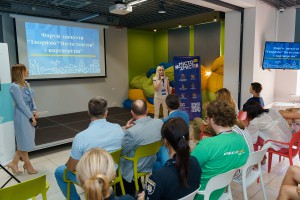 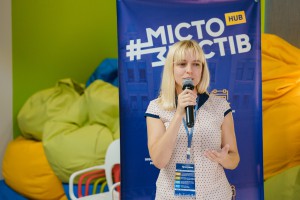 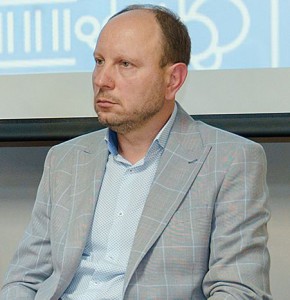 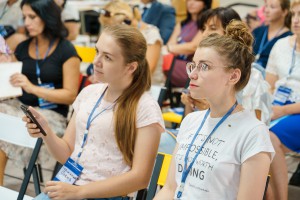 On August 20, “Creating “A Meaningful City” in Partnership” Forum took place in Vinnytsia, in which the city’s NGO representatives took part. During the event, the results of the project “A Meaningful City: Communication and Participation Area” were summed up. Its most valuable achievement was building up an environment of NGOs that teamed up for creating the Union of Vinnytsia NGO “Meaningful City” Network aimed at joint development of the Hub as a platform for interaction and dialogue. The further stage includes activating a consistent Hub-based cooperation between public community and Vinnytsia City Council.

The Project “A Meaningful City: Communication and Participation Area” began in March 2018. It was aimed at drafting the “Meaningful City” Hub Development Strategy and Power-and-Community Cooperation Memorandum, designing the Hub’s brand and logo, its business model, producing the Hub’s promotion leaflets, video materials, and launching its website.

All these “intellectual products” were made due to joint activity of Vinnytsia NGOs and “Institute of Urban Development” MC, a key contractor to this project and, eventually, a grant receiver. Thanks to support from Canadians, we managed to involve sectoral national experts, who, actually, helped us develop the above mentioned documents, provided advice, and organized meetings.

“I can confidently say that the expectations I had in 2014 have been fulfilled. Like in many other cities at that time, NGOs tended to compete with each other rather than collaborate, and everyone was interested in who was going to manage it all. Then we took a decision that the organization of such space should be chaired by an enterprise of Vinnytsia City Council. This is so because, generally speaking, the Hub was tasked to create a dialogue between NGOs, representatives of local self-governance bodies, public bodies, society, territorial community members, etc. I am grateful to Alina Diachenko and the team of “Institute of Urban Development” for their quite a serious approach to the organization of this project: NGOs became united, now there are 33 of them. I think we should not give up, we should move beyond”, – Vinnytsia Mayor Serhii Morhunov said.

Currently, the Union of Vinnytsia NGO “Meaningful City” Network includes 33 Vinnytsia NGOs, which are very dynamic and effective. They are the most frequent users of the Hub by doing here a lot of projects and holding events, actively working as the Union members. To manage the “Meaningful City” Union and build up the direct collaborative relationship with Vinnytsia City Council, the Coordination Council of NGOs was created, with 9 persons on behalf of NGOs.

“If this space hadn’t existed, many events would not have taken place. It definitely contributed to our NGOs’ capacity building, and then became an incentive for their cooperation. The Institute of Urban Development actively involved NGOs in the process. We aimed at developing certain rules: how this space was going to function, which NGOs could hold their events here, how to book a room, etc. Then, we came up with an idea to team up in the form of the union of NGOs. We had a lot of discussions about partnership between municipal power and NGOs. Now we have our own operational mechanisms, and we are ready for the further step at this stage: to build up the partnership at the level of public community and city council”, – Head of Coordination Council of “Meaningful City” Network Olekssandra Lysa said.

The project “A Meaningful City: Communication and Participation Area” was supported with a grant from the Federation of Canadian Municipalities in the framework of “Partnership for Local Economic Development and Democratic Governance” Project (PLEDDG).

“I feel envious of Vinnytsia, of that your municipal power and Serhii Morhunov realize the importance of creating such a good space, a tool enabling the power-and-community cooperation. This form of collaboration in Vinnytsia has no comparable counterparts in other cities, and we have already told our partner cities about your activity considering it to be one of best practices. This initiative is one of those we have been successfully implementing in Vinnytsia due to pro-active attitude of power, community, and business. Everything initiated in Vinnytsia brings very good results”, – PLEDDG Senior Expert, Head of Experts Group Ihor Lepyoshkin said.

Next stage of the project is to activate a comprehensive cooperation between public community and Vinnytsia City Council and to decide on the management system of “Meaningful city” Hub operation efficiency.