On April 12, 2019, in Ivano-Frankivsk a studio of the Creative Women Start-up Accelerator was officially opened.

The event was attended by partners and potential investors. Iryna Vandych, Regional Coordinator of PLEDDG in Ivano-Frankivsk, spoke on behalf of PLEDDG.

The studio of the Creative Women Start-up Accelerator was opened with financial support of the PLEDDG SME Fund Grant Program as part of the project “Creative Woman Network: enhancing women’s capacity in creative industries of Ivano-Frankivsk”. The general objective of the project is to create real opportunities for realization of business ideas and the achievement of success for young women who link their business intentions to the specific sectors of a creative industry in Ivano-Frankivsk, in particular, design, cookery, cultural heritage, music, performing and visual arts, festival/event management. As part of the project, it is planned to set up a network and partnerships between women working in creative spheres and successful women of Ukraine through a mentorship program and to give an impetus for implementing creative business initiatives and support in the course of business coaching with a mentor, to enhance women’s capacity to successfully conduct business activities through specialized training courses, etc. 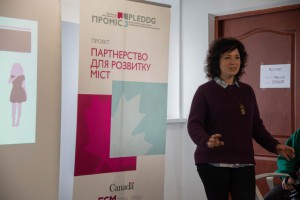 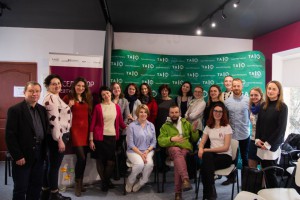