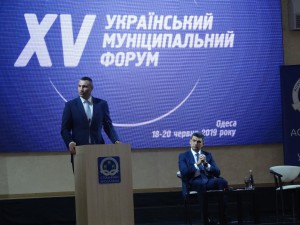 Odesa hosted the XV Ukrainian Municipal Forum on June 18–20, 2019. The Ukrainian Municipal Forum is a nationwide annual event held by the Association of Ukrainian Cities (AUC) in order to provide an effective platform for training, to share experience, ideas, and Ukrainian and international best practices of local government and local economic development, to discuss threats and risks for the local government reform and territorial organization of authority in Ukraine, and for government agencies and the Association of Ukrainian Cities to work out a common attitude to developing local government, improving the legal framework, further decentralizing authority, and enabling the economic development of communities.

This year, the Forum brought together about 400 participants, including local and central government officials, people’s deputies of Ukraine, Ukrainian and foreign experts, members of international technical assistance projects and others.

The Forum’s first day, the Day of Dialog with the Government, was held within the USAID project Policy for Ukraine Local Self Governance (PULSE). The Forum was opened by AUC Chair and Kyiv Mayor Vitali Klitschko, еhe Prime Minister of Ukraine Volodymyr Groysman addressed those present with a welcome speech, emphasizing how important it is to complete the decentralization reform despite existing risks and threats.

During the second day of the Forum, PLEDDG and AUC held a working meeting of the AUC Committee on Equal Rights and Opportunities for Women and Men. Acting Mayor of Irpin Anastasiia Popsui participated in the meeting and shared her impressions of Women Deliver, the world’s largest conference on gender equality, which was held this year on June 3–6 in Vancouver, Canada. For Ms. Popsui, the only representative of Ukraine at the Conference, participation was made possible with the financial support of the Federation of Canadian Municipalities.

Invited by PLEDDG, former Weyburn (Canada) Mayor Debra Button attended the Committee meeting. Ms. Button shared her personal experience of participation in her home city’s political life, talked about challenges and obstacles she had had to face as the Mayor and lessons she had learned during active political involvement. At the end of her speech, Debra Button encouraged Ukrainian women to be actively involved in community life and not be afraid of taking the lead.

At the meeting, they announced the outcomes of the call for proposals for short-term initiatives to encourage women’s participation in local economic development organized by the Association of Ukrainian Cities and PLEDDG. As part of this competition, AUC called for proposals from AUC city council members for short-term initiatives that would encourage women’s participation in local economic development (see more about the conditions here). Winning participants presented their projects and described how exactly they were planning to make a difference by achieving the equality of women and men in their communities’ economic life.

Organized jointly by AUC and PLEDDG, one day of the Ukrainian Municipal Forum is traditionally dedicated to the economic development of Ukrainian cities. This year, the Day of the Economic Development of Ukrainian Cities was the Forum’s last day. It was opened by Ihor Lepyoshkin, PLEDDG Senior Expert and Head of the Experts Group. The opening ceremony was held by Yurii Terentiev, Chairman of the Anti-Monopoly Committee of Ukraine, Yurii Brovchenko, Deputy Minister of the Economic Development and Trade of Ukraine, Serhii Komnatnyi, Chairman of the State Fund for Facilitation of Youth Construction, and Oleksandr Slobozhan, AUC Executive Director.

Moderated by Ihor Lepyoshkin, the first plenary session was dedicated to empowering local governments in terms of local economic development (LED). Natalia Baldych, an expert at the Council of Europe, talked about educational needs of local government officials. Volodymyr Vakulenko, Chairman of the NAPA (National Academy for Public Administration) Department of Regional Administration, Local Government, and City Management presented a LED professional training program for management designed by NAPA in cooperation with PLEDDG. Hennadii Marushevskyi, PLEDDG consultant on environmental sustainability, reminded how important it was to carry out a strategic environmental assessment within local economic development to weigh potential negative environmental effects of economic activity and identify action required to eliminate such effects. He also presented a practical guide for local and central government officials “Guidance on Strategic Environmental Assessment of State Planning Documents” drafted as part of PLEDDG (the guide can be downloaded here). Vitalii Pogosian, Director of the Economy and Investment Department at Vinnytsia City Council, shared Vinnytsia’s progress with democratic governance and local economic development and talked, among other things, about local officials’ training to enhance their professional competences supported by PLEDDG.

Ted Treller, a Canadian expert and consultant to PLEDDG, talked about local economic development priorities in the context of Canadian LED best practices. The Canadian consultant chose investing analysis as the topic of his speech, stressing the need for both a systematic and creative approach to investor relations.

This day also included an official announcement of winners of the AUC gender initiatives competition. Oleksandr Slobozhan, the Executive Director of the Association of Ukrainian Cities, and Oleksandr Ignatenko, PLEDDG Senior Expert in Inter-Governmental Cooperation and Economic Development, congratulated winners and awarded certificates acknowledging a financial grant for the implementation of gender initiatives.

Winners of the 2019 gender initiatives competition:

The second plenary session was dedicated to equal rights and opportunities for women and men. Among other things, the participants discussed introducing gender policy nationally and locally and the Canadian experience of engaging women in local policy-making, coordinating the accession of cities to the European Charter of the Equality of Women and Men.

Gender equality is a recurring theme of PLEDDG that runs across all project focus areas.