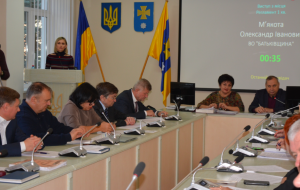 Myrhorod Marketing Strategy was approved at the Session meeting of Myrhorod City Council. The development of the document was a requirement for the implementation of at least two goals of the approved Strategy for Sustainable Development of the Myrgorod Subregion, namely “Investment Marketing of the Subregion” and “Marketing and Branding of the “Myrgorod” Resort”.

The document was presented by the Head of Economic Forecasting and Tourism Department Oksana Golub. She noted that in the conditions of strengthening of modern regional competition, the image of the city is as important factor of its development as land, material assets, personnel. Consequently, the role of successful positioning of the city, which would attract external resources for its own development, increases.

Thanks to the methodological support in the process of Marketing Strategy development provided by the consultants of PLEDDG implemented by the Federation of Canadian Municipalities, with the support of the Government of Canada, Myrhorod has the opportunity to generate high-quality comprehensive image of a comfortable city that has a recognizable and conceptual brand that the visitors and residents of the city will associate with its appealing features. This should have a positive impact on the development of the territory as a tourist, recreational and health center, support for the main industries, which will contribute to the formation of a positive image of the resort city, which meets modern requirements and European standards, to increase the number of guests and tourists.

The implementation of the Marketing Strategy is planned to be carried out at the expense of existing city target programs, which in the future will take into account the costs of the planned activities. The fulfillment of such tasks is envisaged through the common realization of the interests of the government, society and business.

Among the main objectives of the Marketing Strategy are: