City of Ideas: the Secret to Success of the Vinnytsia Brand 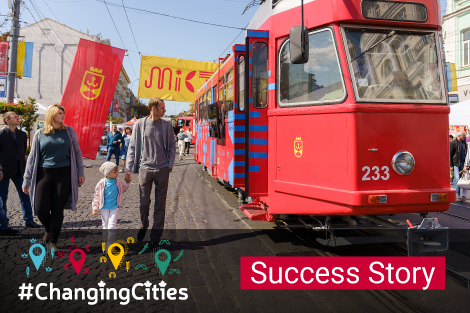 In May 2019, Vinnytsia unveiled a new city brand created under the auspices of the international technical assistance project, Partnership for Local Economic Development and Democratic Governance (PLEDDG). The brand concept is encapsulated in the slogan “Vinnytsia – a City of Ideas”. The designers aptly highlighted the fact that Vinnytsia is a city with a tremendous potential where any ideas can flourish into a successful business or public initiative in a comfortable and friendly setting.

The designers transformed the city’s historical coat of arms into a modern logo: the two crossed swords portrayed on the central shield to symbolize the city’s frontier location have been simplified into laconic geometric shapes. Also, a dedicated font system called Vinnytsia City has been created especially for Vinnytsia in a metaphorical combination of the city’s rich history and its incessant striving for innovation. The fonts feature intertwining Cyrillic and Latin shapes that make them distinguishable. The Vinnytsia brand was designed by the Fedoriv agency, one of Ukraine’s most prominent marketing companies. The team of designers are certain that the original layout chosen by them conveys the creativity and free spirit for which the city has always been renowned.

“We have come to realize that every city can compete with other cities for resources, investments, tourists, and residents only if it can expertly implement territorial marketing and branding. Adoption of Vinnytsia’s city brand is a new step on the path toward successful growth. The concept of the ‘Vinnytsia – City of Ideas’ brand was unveiled on May 18. That same day the city celebrated Europe Day, with photo-op zones set up in thematic locations and branded souvenirs handed out. Vinnytsia residents also had an opportunity two write their ideas for city’s development on an improved board,” says Oleksandr Vesheleni, Director of the City Marketing and Tourism Department at Vinnytsia City Hall.

Since a brand also has an audiovisual dimension, the Jazz rendition of “Shchedryk” by Mykola Leontovych was chosen as the distinguishing musical accompaniment of the brand. Given the birthplace of the composer, this world-famous tune conjures up associations with Vinnytsia in particular. Even a new term, “Vinnovations”, has been coined to designate phenomena and innovations specific to Vinnytsia.

Creation of the brand design is a component of the City Marketing Strategy approved in June 2018, which was also devised with support of the PLEDDG project. Since then the city has been making consistent progress toward its goal to form a unique image of Vinnytsia as a city with strong, genuine, innovative, tolerant, balanced and harmonious leadership.

From the very outset of marketing strategy development, it was clear that the existing image of Vinnytsia was generally positive. The contributing factors were the high standards of municipal services, successful performance of big businesses, regular cultural events, unique tourist landmarks, and a fairly developed municipal infrastructure.

Despite all of its merits, until recently Vinnytsia did not have a clearly defined identity that would enable the city to position itself successfully at the national and international levels. A common stereotype portrayed it as the “city of the Roshen fountain” or “the city of one day”, where tourists were not likely to stay long.   In the absence of a comprehensive informational policy on how to promote the city as a product, it was high time to devise the concept of the city brand and put together a far-reaching marketing campaign.

“Vinnytsia – City of Ideas” is brand for not just city residents but also for tourists and investors alike. Just as intended, the new identity has already left an imprint on all sorts of the city’s promotional materials and daily items: gifts, clothing, public transport, public places, store and coffee shop signs. The brand is also gradually making its way into the city space: local entrepreneurs and event managers have started using the new identity on their own as a way to boost the image of their products. For the convenience of all those wishing to use the Vinnytsia brand, the designers launched the “Vinnytsia Generator” service where any text can be easily stylized using the decorative font developed specifically for the brand.

The usual practice is to gage the effectiveness of city marketing and branding only several years after the start of implementation. Yet Vinnytsia has already made some discernible progress in this respect. Over the course of 2019, the city has been able to not just unlock and effectively promote its tourist potential, but also enhance it with new projects. One of the drivers behind the growth of the tourist potential has been the creation of the city’s marketing and tourism department that monitors the effectiveness of the marketing strategy and the city’s new brand.

“Successful implementation of the city’s brand hinges on the positive feedback and active use of the identity by residents, local businesses, and tourists who feel like they are brand ambassadors. Vinnytsia is already recognized as a ‘city of ideas’ at the national level. Vinnytsia booths stand out from the crowd and are memorable at international expos and thematic forums. Efforts are now in progress to develop a communications plan for brand promotion to domestic and foreign audiences and to set up a point of sale of branded souvenirs at the future tourist hub,” Mr. Vesheleni says.

In 2019, the city hosted various activities which attracted tourists such as “Ticket to the Sun” and “Travelers’ Weekend” in the summer; City Day and Vinnytsia JAZZFEST in the fall; AIR GOGOLFEST International Contemporary Art Festival; and “European Heritage Days.” Toward the end of the year, Vinnytsia officially unveiled 12 new sightseeing routes where the renovated and rebranded City Tour sightseeing tram was launched on City Day.

Vinnytsia also cares about innovations for tourists and created new tourist signs in the fall. They have already been installed in the most populous residential district, Vyshenka. The signs are information plaques with QR codes that inform visitors of Vinnytsia about popular landmarks. The design of all plaques uses the style of the city’s brand and the information appears in Ukrainian, English and in Braille. The city’s communications have been additionally enhanced by creating Visit Vinnytsia pages on social networks and launching the vinnytsia.city tourist information website.

“I really like the fresh identity and image of the city. They have become much more stylish, aesthetic. In general, not just the city’s -positioning but also its mood has changed over the past year or two: I feel like coming here to take a stroll, have a coffee, find out about the history of this land, and have fun at the city’s festivities. I am overjoyed that Ukraine keeps adding to the list of venues where you can have a great time at the weekend or during a short vacation,” says tourist Olha Savchuk, who came to Vinnytsia from Kyiv for the weekend.

In 2019, six top-ranking travel bloggers of Ukraine wrote about Vinnytsia. The city’s first tourist promotional video “Vinnytsia is about Win-Win” received 430,000 views after 2 months online. Representatives of the city’s marketing and tourism department have been actively involved in promotional and professional events, including international specialized expos in Kyiv, Lviv and the Polish city of Kielce, as well as other tourist events all over Ukraine.

“In 2019, the influx of tourists into Vinnytsia increased substantially: revenue from tourist fees increased sixfold from the year before. The number of tourists staying in hotels and hostels overnight increased by 12%, and museums drew over 520,000 visitors in one year. Keeping these indicators growing further calls for tremendous efforts on the part of the municipal authorities, businesses, and the community aimed at promoting the city, developing its infrastructure and tourist offering,” Mr. Vesheleni says.

Along with developing its tourist component, Vinnytsia is constantly improving its investment image. According to the Central Directorate of Statistics in Vinnytsia Region, direct investments in the city’s economy amounted to USD 143.2 million as of October 1, 2019. Investments came from 48 countries of the world. With the assistance of PLEDDG experts, a crucial marketing tool – the Invest in Vinnytsia investment portal – was developed in 2018. It has now been also been updated to reflect the new design of the city brand just like the promotional videos, banners, expo booths, and other materials. The results of 2019 confirm the investment attractiveness of the city and the great job done on implementing the brand: the city opened the “Winter Sport” industrial park where the largest plant of the Austrian HEAD brand – a global leader in winter sports gear – will be built; the NESS ESTATE plant has opened, which is the first facility in Ukraine to manufacture solar panels on an industrial scale; and lecithin will be produced on the grounds of the Vinnytsia Industrial Park.

In partnership with PLEDDG, over the past few years Vinnytsia has implemented a series of versatile projects and initiatives and developed crucial documents governing the city’s development: the program to boost the competitiveness of small and medium enterprises; the program to promote the mobilization of investments; the Misto Zmistiv strategy of a communication and participation space; support of inclusive entrepreneurship; and  a new marketing strategy and brand development mentioned above. To sum up, extensive integrated efforts are aimed at promoting the growth of Vinnytsia. They unlock the city’s potential and prove the high effectiveness of the city of ideas.

Vinnytsia is an example of truly successful city brand marketing and branding. The contributing factors are the cohesion of the local community, initiative and ongoing support from representatives of the local authorities, a balanced analysis of the city’s needs, and a creative approach to problem solving. PLEDDG is actively cooperating with other partner cities, helping them devise their marketing strategies, create and promote city brands. After all, in the modern world where cities and regions compete for resources, the concept of a territory’s brand is gaining a colossal significance: successful marketing and branding not only help cities to make a statement about their unique nature but also contribute to their economic development.