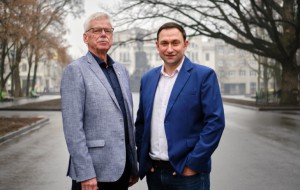 Officials with the Association of Manitoba Municipalities (AMM) have returned from what they are calling a successful trip to Ukraine where they shared a Canadian perspective to municipal government.

AMM President Ralph Groening, accompanied by Executive Director Denys Volkov, travelled to the cities of Kharkiv and Zaporizhzhia as part of an international project through the Federation of Canadian Municipalities. Financed by Global Affairs Canada, Partnership for Local Economic Development and Democratic Governance (PLEDDG) is a six-year technical assistance project that sees Canadian municipal partners mobilized to work with Ukrainian colleagues to form solutions to various municipal challenges such as governance, economic development, and tourism.

“FCM has been working with Ukranian municipal leaders over the last five years as part a long term agreement…and (AMM) was part of that initiative and so we offered to participate in the cooperative arrangement,” explained Groening, adding the initiative is founded on the strong roots of Canada’s Canadian-Ukranian community. “And so the Federation of Canadian Municipalities built off that internal strength to reach out and work with Ukranian municipal leaders and communities to help them build their capacity.”

During their stops in each city, Groening and Volkov delivered presentations on the importance of gender equality and women in municipal government, municipal advocacy and financial independence of municipal associations. The pair also participated in several one-on-one meetings with senior Ukranian officials who have an interest in building relationships with Manitoba municipalities.

“Building these partnerships present opportunities to share best practices that help strengthen municipal governance in both countries,” added Groening, who says it was an intense but gratifying trip.
“They were wonderfully receptive, we had great conversations…I was just overwhelmed by the hospitality of people in the communities…and we look forward as an association to continue our relationship with Ukrainian municipal leaders,” he said.

According to an AMM news release, the organization says it will continue to support the project by helping to identify economic development opportunities and other potential areas of mutual cooperation between Canadian and Ukrainian municipalities.

In fact, Groening says some discussions have already taken place.

“We talked about the idea of sister-cities and the potential of connecting Kharkiv with a municipality, town or city in Manitoba,” he noted, adding AMM is also interested in exploring economic development opportunities with various Manitoba-based businesses. “We’ll be beginning discussions with businesses to see what options, potential and what opportunities there are.”

This isn’t the first time that municipal government officials from Manitoba have travelled to Ukraine as part of the PLEDGG project. Previous visits involved representatives from the Town of Virden, and cities of Steinbach and Winkler.