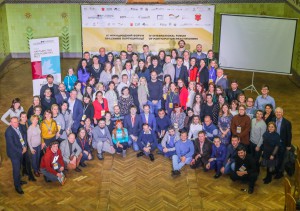 On January 17-18, the IV Forum of Participation Practitioners was held in Poltava. Each year, the Forum brings together officials, experts, activists, international partners in order to discuss current challenges and explore the best practices of participatory budget implementation in cities.

This year, the event was held in Poltava which is the first oblast that has introduced a public budgeting at the regional level. The event was organized by Poltava City Council, PLEDGG Project, PAUCI Foundation, German Corporation for International Cooperation “Deutsche Gesellschaft für Internationale Zusammenarbeit (GIZ) GmbH, East Europe Foundation and International NGO “Foundations of Freedom”.

During the plenary sessions, participants have learnt from leading international practitioners and had the opportunity to advance their knowledge in the field of participatory budgeting while participating in workshops and discussions devoted to the citizens` involvement in various stages of the budgetary process and regulations in this sphere.

“The public budget is a relatively new phenomenon for Ukraine, which is rapidly spreading, and new communities are being added to it. Each year the Forum gathers more and more participants, which indicates the interest of the cities’ and amalgamated territorial communities’ authorities, and the public as well, in implementing of this practice. The use of this tool contributes to more active municipal development, because it allows to take into account the interests of the residents in the process of drafting and implementation of local budgets” said Ihor Lepyoshkin, Senior Expert/Program Lead, PLEDGG Project.

The public budget works in 15 PLEDGG partner cities: Vinnytsia, Zhmerynka, Khmilnyk, Ivano-Frankivsk, Dolyna, Kolomyia, Poltava, Myrhorod, Kremenchuk, Horishni Plavni, Zaporizhia, Energodar, Melitopol, Berdyansk, Yaremche. The total amount of participatory budgets in these cities is 59 million UAH which is just as much as cities annually spend on the implementation of public projects – the winners of the vote. This tool provides public access to management of the city funds and at the same time symbolizes the willingness of local authorities to be open and transparent in making decisions.