Creative Startup Accelerator: How Women’s Entrepreneurship Is Fostered in Ivano-Frankivsk 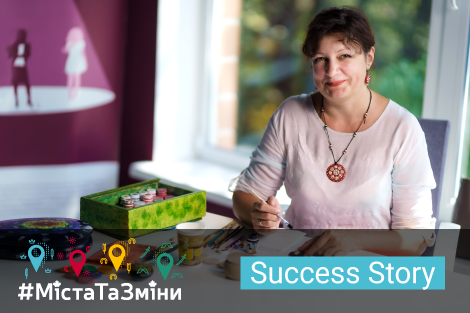 In 2019, Ivano-Frankivsk saw the official opening of the studio workshop of the Women’s Creative Startup Accelerator founded as part of the project titled Creative Woman Network: Empowering Women in Creative Industries of Ivano-Frankivsk. The project was implemented over the course of a year by the Ivano-Frankivsk Region Tourist Association jointly with the NGO, the Private Initiative Development Agency. The initiative was brought to life under the auspices of the SME Development Support Fund of the Partnership for Local Economic Development and Democratic Governance international technical assistance project (“PLEDDG”).

The accelerator supports women’s private enterprise, where specialized training courses and mentoring programs help women to develop their ability to do business successfully. Ten women’s startups were short-listed for the first acceleration program. Project coordinator Lada Malaniy says that the participants were selected by a special council of successful Ivano-Frankivsk entrepreneurs, who work in the creative industry, representatives of the local authorities, and other people interested in promoting women’s private enterprise in the city.

“From the outset it was a real experiment meant to find out whether women of Ivano-Frankivsk would actually be interested in joining this program. Once we received close to 25 applications, it became obvious that demand for the program existed. The chief selection criteria were motivation of businesswomen and their willingness to do business officially. As the program was being implemented, it became clear to us that each one of the selected participants actually wanted to expand and improve her business professionally,” Lada Malaniy says.

Over the course of several months, the program participants attended many trainings focusing on product design; basics of accounting; private enterprise and business planning; digital marketing; social media management; and overcoming personal barriers to business growth. The organizers have expressed their amazement at how much the participants changed toward the close of the program and how they clearly understood the needs of their businesses, saw their startups from a fresh perspective, and identified their growth vectors.

One of the project participants — Larys Konnyk, owner of Stanislav Soap Factory — has been selling natural body care products made with vegetable oils, herbs and different kinds of wheat for three years now. Over the course of 2019, sales rose by 60%, specifically owing to rebranding and implementation of knowledge acquired by the owner as part of the accelerator program. The businesswoman underscored that the coaches and mentors were selected very thoroughly, which enabled her to acquire truly valuable practical experience. Larysa shared her impressions of the two-day “Product Design” training conducted by Vitaliy Kyryliv, co-founder of the company HochuRayu.

“Vitaliy did not resort to any platitudes. He studied the business of each participant in detail and closely analyzed our business profiles on social networks. I can say that he acted as our psychologist. As for my soap factory, Vitaliy helped to figure out the essence of my brand and offered incredibly apt design tips. For example, he advised me to use only pure colors and keep things simple and minimalistic. He was able to formulate all those things I personally sensed for a long time. Another program participant, Tetiana Cherkashyna, developed the new design for me. The current design solution feels very close to me. It is fully in tune with both myself and the concept of my business,” Larysa Konnykshared.

Another project participant, Iryna Darvay is the co-founder of the education venture called New Energy, which has been operating successfully for three years now on the premises of Ivano-Frankivsk National Technical University of Oil and Gas. New Energy is an educational space where children aged 4 and older are developed intellectually and creatively through popularization of science via gameplay. New Energy has an interactive science museum, stages scientific shows, holds training courses and STEM camps. Since it first opened, New Energy has had over 50,000 visitors. Iryna notes that the majority of the visitors came during 2019.

“I came to the Accelerator with a startup of the Academic Nova school that works as part of New Energy. I got the idea for the school from our visitors who frequently inquired if we had any training courses for children. That’s how we launched four study streams: IT, natural sciences, 3D technologies, and architecture and design. We also hold energy saving trainings for adults and have plans to expand our target audience to include retirees. When I first joined the program, New Energy had already reached a certain level. The team and I wanted to develop it further but at the same time felt there was a shortage of knowledge. Owing to the accelerator, we acquired invaluable information on team building, financial management, and business planning. While discussing product design, Vitaliy Kyryliv competently outlined our growth vector to which we have since adhered to effectively. I must admit that the training came as quite a surprise to me because I did not expect to hear any criticism for some reason. Yet he managed to help me gain an important realization that I had to look for a balance between the social component of the project and its market value,” Iryna Darvay says.

A mentoring program was part of the training process. It enabled the participants to establish partnerships with women who are already recognized leaders in the relevant sectors. Each participant was assigned a mentor, mostly an owner of a similar business, with whom she was able to discuss all unresolved issues of her business, share plans, acquire experience and complete an optional internship. Lada Malaniy says that the mentoring program surpassed all expectations of both organizers and participants.

“My mentor was Aliona Kalibaba, who also conducted one of our trainings. She taught me how to present myself to an investor, how to accentuate my presentation expertly, and how to conduct myself during negotiations. I received countless insights from her, and we are eagerly implementing them with my team. We agreed to meet with Aliona in Kyiv, and I am certain that our cooperation is only beginning,” Iryna Darvay adds.

On November 29, 2019, the Promprylad.Renovation center hosted the final event of the project – Accelerator Startup Demo Day, where participants presented their startups. Using dedicated equipment of the Accelerator studio workshop procured with the funding from PLEDDG, each businesswoman was able to prepare a branded presentation kit: cups, bags, T-shirts, boxes, magnets, etc. Iryna Darvay shared her experience, since a potential investor liked her presentation in particular.

“I truly took the most out of this project! An investor took an interest in my startup during the Startup Demo Day and expressed willingness to invest funds. My colleagues and I are currently preparing for negotiations in order to demonstrate a full-fledged business plan and continue our dialogue,” Iryna says.

Summing up the key achievements of the project participants, Lada Malaniy underscored that the women significantly improved their presentation skills, became more competent and self-confident in just half a year, learned to cooperate, and to work as a team. During the acceleration program, eight participants jointly developed new product lines using the experience of one another and enhancing their own brands. For example, Iryna Darvay enlisted illustrator Milena Vitrovska to draw physicist Nicola Tesla, for whom one of the shows at New Energy is devoted to, and also used her drawings to sell notepads. Most women also became customers of one another. Iryna Darvay believes that one of the biggest achievements for her was that she acquired the financial literacy essentials of doing business.

“The team and I finally summarized everything we have done over the past three years. First, we have adopted a more scrupulous approach to calculating the cost of production of our services and analyzed our weaknesses. Second, we began changing approaches to work within the team, which currently numbers 30 people. I have realized that people are our valuable asset, they want to grow and we must help them do that. Third, we began devoting more attention to promotional merchandise and are improving the quality of communications on social networks,” Iryna Darvay says.

By supporting such initiatives, PLEDDG is actively fostering the involvement of women in local economic development, strengthening their positions in society, and unlocks new opportunities for realization of their business ideas. Participation in the Accelerator enabled women of Ivano-Frankivsk to build a strong women’s partnership, a community of mutual support and respect. Every such project in combination with other projects generates far-reaching synergy and produces colossal changes over the course of several years. Similar initiatives that transform the role of women in various spheres and improve the national economy as a whole are being implemented in other regions under the auspices of PLEDDG.