Gender equality is a cross-cutting theme for the PLEDDG Project. Equal participation of women and men in municipal development is key to economic growth, greater security, and prosperity for both society as a whole and for every individual. These issues are being addressed through strategic planning, support for SMEs, and inter-city cooperation. 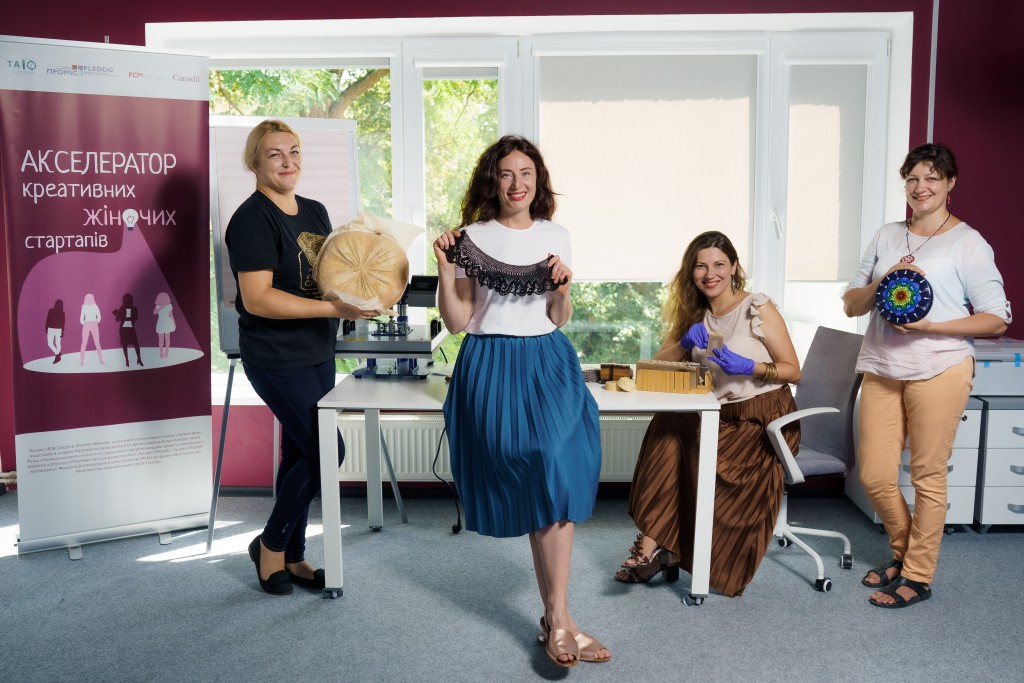 The main components of gender equality mainstreaming include:

Support for entrepreneurship and women in business

This comes in the form of support for newly-established associations for businesses owned by women and through the integration of feminist approaches in all SME development measures.

Among the main achievements so far has been the publication of a comprehensive analytical study called “Inclusive Business Development: Female entrepreneurship in Ukraine (available in Ukrainian)”, which makes a strong case for ensuring the participation of women in the economic sphere. This study was presented at the International Conference for the Development of Inclusive Business, where best Canadian practices for supporting women in business were discussed. In addition, two study tours on female entrepreneurship took place in Ukraine and Canada, in which more than 60% of the participants were women.

The PLEDDG Project, in cooperation with the AUC, is implementing and funding gender initiatives put forward by cities from across the country. Two grant competitions resulted in funding being provided to fifteen initiatives aimed at fostering the participation of women in various areas of municipal life. This made it possible to undertake important studies, provide necessary training, and increase public awareness of the involvement of women in business. In 2018, included in these initiatives was the creation of gender profiles for three Ukrainian cities—Zhytomyr, Lviv and Kharkiv. A guidebook was published to help local government officials integrate the gender component in projects, programs, and measures, a broad-based campaign was carried out in Ternopil to engage women in the IT sector, internships at Dnipro City Council were offered to 20 women, Ivano-Frankivsk’s Strategy for developing entrepreneurship underwent gender analysis and the necessary changes were adopted, and 50 new female entrepreneurs were registered and 140 women gained business skills: 75 from Khorol, 15 from Lviv, and 50 from Ivano-Frankivsk.

The PLEDDG Project continues to build on its successes in Vinnytsia, which became the first Ukrainian city to join the European Charter for Equality of Women and Men in Local Life. Later, VInnytsia approved the Concept for its “City for Equality through 2023” program. In June 2018, with the support of PLEDDG, the leadership of the AUC participated in the Council of European Municipalities and Regions (CEMR) EU Charter Conference in Bilbao, Spain, together with representatives from the cities of Vinnytsia, Zhytomyr and Irpin. This, coupled with continuing cooperation, resulted in Zhytomyr and Irpin becoming the next signatories on behalf of Ukraine, while the AUC became the official national coordinator of the Charter. The AUC is supporting Ukrainian cities in joining the Charter, establishing an agenda, monitoring implementation, and cooperating with CEMR. So far, more than 70 cities have received assistance. PLEDDG provides the necessary expertise, accumulates and disseminates the best practices of Ukrainian signatories of the Charter. The first All-Ukrainian forum on meeting the commitments of signatories to the Charter took place in December 2018. PLEDDG further organized a webinar in March 2019 to provide clarifications and advice on how to join the Charter and what the follow-up steps should be.

With the support of PLEDDG, officials from three partner cities—Melitopol, Horishni Plavni and Ivano-Frankivsk—underwent training and designed a gender-sensitive approach to budgeting that led to changes in their budget programs. Plans are to continue supporting these cities and to provide training and ongoing support for five more cities—Myrhorod, Kremenchuk, Pervomaisk, Khmilnyk, and Kolomyia. These activities are being led by an external trainer, certified in gender budgeting, who will continue to supervise the cities during the entire process.

At the national level, PLEDDG has been working closely with the Government Commissioner for Gender Policy and is helping draw up the Commissioner’s Strategy for 2018-2020. In addition, PLEDDG worked with the Equal Opportunities Caucus of the Ukrainian Parliament to organize the first and the second Ukrainian Women’s Congresses, where established speakers from Canada shared Canadian best practices and approaches to gender equality in the area of economic development and promoting women in politics. In addition to the national congress, PLEDDG co-organized three regional Women’s Congresses, along with other program’s partners.

The PLEDDG Project advises partner cities that are preparing strategic documents in order to include indicators that can foster greater gender equality. Municipal economic growth strategies have enormous potential to remove economic and other inequalities between women and men. This makes it extremely important to include recommendations and steps aimed at reducing gender disparities.

PLEDDG integrates gender equality issues in training programs that are held for specialists in local economic development (LED), and in studies and guidebooks for government workers, community representatives and business with regard to formulating and implementing strategic municipal development plans

Over 2018, three Ukrainian cities developed their gender profiles. This activity was introduced with funding from Global Affairs Canada, which supported the joint efforts of the AUC and the PLEDDG Project.

A gender profile is an information tool that allows municipalities to make decisions that are aimed at resolving problems that affect the entire population and respond to the real needs of various social groups. To put together such a profile, a city has to collect and analyze a large amount of data that can answer such important community issues as: Is the distribution of local resources justified and fair? Do the decisions being made match the real needs of residents, taking into account gender, age, social status, the presence of handicaps, and other individual aspects?

In the process of preparing such profiles, the three cities ran into considerable challenges, including a serious shortfall in gender-distinguishing indicators and statistics. By reading the stories of how the cities of Lviv, Kharkiv and Zhytomyr developed their own gender profiles, you can find out how these cities resolved difficult issues in the process, and how to make this tool more useful and its results more sustainable.

This section includes materials that do not fit into the overall structure of project documents, but can be useful to those who are interested in information on gender equality: female and social entrepreneurship, including gender aspects in informational materials, and so on