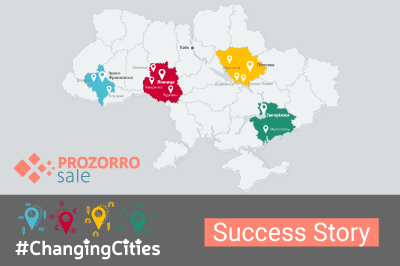 ProZorro.Sales is an e-commerce system that has been operating in Ukraine since 2015, delivering a convenient and fully transparent process of state and municipal property sales, which also reduces the risk of corruption. The system has already generated UAH 30 billion for the national and local budgets and has hosted more than 314,000 auctions that drew 22,600 bidders.

The platform unites e-commerce systems focusing on three key aspects: sale of minor privatization assets owned by the state or local communities; sale or rent of assets belonging to state- or community-owned enterprises; and sale of assets in private or corporate bankruptcy cases. ProZorro has recently launched commercial auction functionality, enabling privately-owned companies to sell buildings, land, equipment, or services to businesses or the public. Also, in February 2020, the Ministry of Energy and Environmental Protection launched an experimental project under which all unprocessed timber that had been harvested by registered forestland users will be sold through ProZorro e-auctions exclusively.

The “Partnership for Local Economic Development and Democratic Governance” (PLEDDG) project which is funded by the Government of Canada (GAC) and implemented by the Federation of Canadian Municipalities (FCM), is actively supporting the implementation of open and transparent governance in Ukrainian communities and has made it one of its priority missions to promote competent use of the online platform. To this end, training sessions for users of the Prozorro.Sales system were held in Zaporizhia, Poltava, Vinnytsia, and Ivano-Frankivsk in early 2020. Local government officials, journalists, and NGO representatives not only became more knowledgeable about effective management of community-owned property, but also gleaned insights into the workings of the Prozorro.Sales e-commerce system: how it can help boost local budget revenue, what kind of assets are sold via the platform, and what the primary property management tools are. Trainees also learned about additional ways to channel revenue into local budgets such as by renting out property, selling advertising rights, or setting up seasonal retail outlets.

Thirteen PLEDDG partner cities are already selling community-owned property through the Prozorro.Sales system and they have collectively generated almost UAH 285 million for the national and local budgets (data as of September 1, 2020). For example, over the past two years Ivano-Frankivsk sold UAH 20.42 million worth of community-owned property through ProZorro. In October 2020 alone, the city held 4 successful auctions that will contribute UAH 7.47 into the local budget. Five more sales with a declared value in excess of UAH 2.7 million are scheduled to be auctioned off by the end of November.

“One of the advantages of the Prozorro.Sales system is that potential buyers can submit auction bids online at any time of their convenience, from anywhere in Ukraine. In the past, documents had to be submitted in person. The process was much more complicated and time-consuming. Moreover, in 90% of all cases community-owned properties had been bought by residents of the population center where the property was located. Now the process is more streamlined and diversified. Moreover, auction bidders remain anonymous from one another and from the organizers until the bidding is over. This has rendered any hush-hush deals or corrupt schemes virtually impossible.

If the plan is to bring in more money for the local budget, ProZorro offers an effective way to accomplish this. Owing to successful auctions in 2020, we in Ivano-Frankivsk have exceeded our targets by almost sixfold. We always make sure that city properties fetch a good price. We never bring down the price below asking. For example, this past April we sold a building in the city with a floor area of more than 1,100 m2, which had not been used for over 10 years. The sale price soared to UAH 11 million, although the asking price was almost twice lower,” says Ihor Hrynenko, Director of Community-Owned Resources Department at Ivano-Frankivsk city hall.