Ivano-Frankivsk—a city for living. How brands are made

In 2019 the Ivano-Frankivsk City Council approved the city brand. The search for a suitable logo was not easy for the city’s residents and took several years. Success in this important process was made possible through cooperation between the city and PLEDDG Project.

The story of how Ivano-Frankivsk developed its brand and visualization began back in 2010. A competition committee that included historians, specialists in local lore, and art critics accepted submissions from designers for two months, receiving around a dozen proposals. Although there were some interesting and original ideas among the submissions, the committee was unable to agree to a single vision and put the project aside, indefinitely. The city remained without a brand or logo.

The question of quality branding still needed to be resolved, because cities today are perceived less through their functionality than through the emotions associated with them, its specific impressions, attributes and associations. This makes a city logo the simplest and quickest way to communicate the essence of its brand and easily identifying who it is. Branding has become one of the key competitive elements for a city in the outside world. Combined with targeted marketing, it helps cities to reach economic goals more easily by increasing tourist numbers, developing local business, attracting new investors, and maintaining the loyalty of its residents.

In 2013, Ivano-Frankivsk businesses and the community took it upon themselves to establish a visual style for the city. Business owners realized that they needed to get more of the transit tourist traffic to linger in the city, and that meant making Frankivsk more attractive and establishing its style. Aimbulance, a local marketing agency, was hired to come up with a logo design. Funding came from 46 local companies and interested residents. By March 2014, the logo was ready, but the initiators did not submit it to City Council for approval. Three years later, the mayor announced that the city was prepared to take the logo developed by Aimbulance as its official logo, with some tweaks. Once again, no final decision was reached: it turned out that some Frankivsk residents responded negatively to the proposed design. And so, city officials continued to look for a compromise with the clear understanding that the city really needed a logo.

Strategic processes such as branding a city need properly functioning dialog between the government and the community. Successful branding is generally the result of a common vision, and that means having a solid partnership and teamwork for the benefit of the city. From the very first steps of developing the brand, it’s important to have a complete picture of the situation in the city and to take into account the positions of various stakeholders.

In 2017, experts from the PLEDDG Project were invited to get involved in promoting Ivano-Frankivsk. Together with city officials and members of the community, work began on a marketing strategy for the city in parallel with developing a concept for the city brand. According to the methodology used by the PLEDDG Project, the brand has to reflect how its residents see their city in tandem with a strategic vision for its overall development. During the process of coming up with a concept for the Ivano-Frankivsk brand, members of the working group tasked with putting together a marketing strategy tracked public opinion, ran a poll, and debated at length. Based on the information collected, we were able to formulate a clear vision that reflected both public opinion and the analysis of the specialists. The central idea of the brand was summed up thus: “Ivano-Frankivsk is a warm, cozy city with unique architecture, creativity and cultural energy, a place where you can taste the flavor of inimitable traditions while getting to know contemporary artwork.”

“In the working group putting together a marketing strategy, city officials were working alongside community activists, artists, scientists and historians, as we had decided it was very important to hear the thoughts of different specialists and avoid a one-sided vision. We were able to listen to and weigh various arguments and arrived at an almost unanimous vision for the city brand concept. Experts from the PLEDDG Project worked intensely with us, running workshops and organizing discussions in the ‘Open Space’ format. We made a point of including as many interested residents as possible in all discussions. As a result, we were able to reach a qualitatively new level of dialog. The PLEDDG Project also helped us put together the technical specifications for visualizing and developing the brand design. This allowed us to call a competition for the best logo,” explains Nadia Kromkach, Manager of the Economic and Integrational Development Department of Ivano-Frankivsk City Council.

A competition for the Ivano-Frankivsk brand design was announced in May 2018. Six of the best ideas from among the proposals were selected and on September 20, 2018, a winner was declared: local designers` Petro Kruglya and Ihor Hutsuliak proposal got the highest number of votes. The basic element of the Ivano-Frankivsk logo is a projection of the City Hall, which looks like cross-stitched embroidery. The image also contains other symbols of the city: the Stanislav Fort together with the image of a jackdaw on the city coat-of-arms, a quill for calligraphy, and the Carpathians. The color palette is red and black in various shades. The winning logo is completed by the slogan “Ivano-Frankivsk—a city for living.”

“For the city, the fact that the PLEDDG Project helped organize the competition for the logo was very important. We had no previous experience, so it would have been much harder for us to launch such a process on our own. Most of the members of the working group turned out to like the logo that won the competition in an open vote. The systematic approach to branding and the support of PLEDDG experts brought real results to our discussions with the public,” Nadia Kromkach adds.

The PLEDDG Project uses a comprehensive, balanced approach to branding municipalities. The universal starting point in developing the concept for a brand is researching and analyzing the city’s existing image. This takes place during the course of active dialog with local officials and residents alike. A properly structured concept suggests what should eventually be reflected in the logo. Nevertheless, formulating the brand of the city is a long, painstaking process that requires input from many individuals. What’s more, designing and adopting the logo is only the first step. In 2019 the marketing strategy of Ivano-Frankivsk, also developed with the support of the PLEDDG Project, was approved by City Council. And so, the Ivano-Frankivsk have started carrying out the entire gamut of related marketing activities that, among others, are intended to reinforce the brand and establishing a positive image for the city. 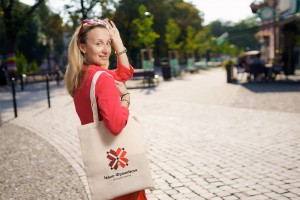 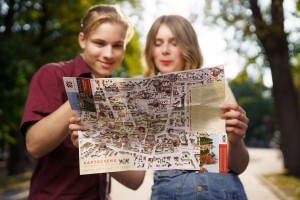