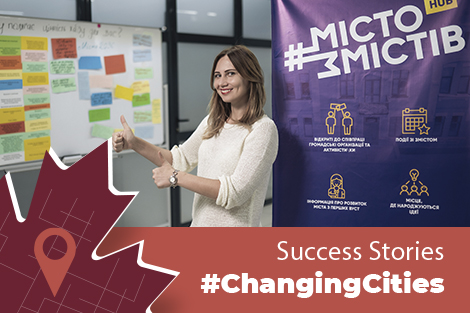 Misto Zmistiv, or Meaningful City Hub, in English is a central hub and a genuine driver of social activity in Vinnytsia. It is founded on the idea of creating cross-sector dialogue among public activists, local authorities and the business community. Last year alone, the hub hosted 476 activities organised by 59 Vinnytsia-based, 26 all-Ukraine civil society organisations (CSOs), 7 international organisations and 17 departments of city- and oblast-level administrations, attended by almost 16,000 people. What is the contribution of the PLEDDG Project to this model and what makes it successful?

The initiative to create this platform started more than five years ago. In 2014, Vinnytsia City Hall approved the Program to Facilitate the Development of the Civil Society Institutions for 2015-2017 with a view of forming a strong territorial community. Key aspects of the Programme included creation of the Centre for support of Civil Society Institutions, where local unions, initiatives and activists can cooperate to enhance their capabilities. The idea served as the basis for creation of the Misto Zmistiv Hub. Today, the Hub is a catalyst of cooperation between municipal authorities and NGOs, with a view to implement the Vinnytsia 2020 Development Strategy.

In 2016, city officials allocated premises with a gross floor area of almost 200 square meters on the ground floor of a historic building at 11 Pushkina Street in the downtown area to host the Centre. Throughout 2017, the premises were renovated for 3 million hryvnias out of the city budget, and the hub opened its doors to visitors in 2018. A feature of the hub premises is its transformation capability: it can be turned into a large conference room seating more than 100 on demand or into compact spaces for work, meetings or private discussions as needed.

‘It is vital that the Vinnytsia municipal authorities understand the importance of this partnership for the city and do not make financial independence of the hub a priority, since the effect of NGO Hub is not measured in monetary terms alone. The establishment of secure social connections between public organisations within the civil sector, cooperation with local authorities, the creation of fair and transparent conditions for democratic governance, elaboration of common values and principles of cooperation that are of primary importance here.

‘Today, we are working on the self-sufficiency of the project, maintaining a business model that includes the provision of commercial services, hosting various events at the Misto Zmistiv Hub, while letting NGOs hold their activities free of charge. The income generated will cover the maintenance costs of the premises, particularly utility bills.

‘Our future plans include the establishment of a public space around the building and opening a terrace for open-air events. We believe that our active efforts and effective partnerships will make Vinnytsia a city of profound significance, on which we are working so painstakingly,’ says Valentyna Tkachuk, Project Manager at the City Development Institute of Vinnytsia City Hall.

Vinnytsia City Hall also ordered and sponsored a special study of Vinnytsia-based civil society organisations (‘CSOs’) conducted in late 2017. The findings show that their city with a population of about 370,000 has more than 1,300 NGOs and almost 300 charitable organisations registered officially. Each year the number of CSOs in the city is steadily rising. CSO biggest challenges are: a low level of institutional and financial capability, inability to engage broad audiences of citizens and present themselves in the information space, avoiding taxes and failure to submit mandatory annual reports, low capability to provide socially relevant services and influence local-level decision-making. Respondents among public activists themselves have pointed out a tremendous need for an exchange of information about both activities of their peers and initiatives of the local authorities. They believe that this need can be met by creating an info portal and opening a public hub.

‘The hub is lucky to have unique support from the municipal authorities that view the funds spend specifically as an investment in the development of the city and the region, which will be repaid a hundred times over. Here NGOs are able to appreciate the essence and win-win synergy of the pooling of efforts and resources. Without a doubt, we are interested in new organisations that seek cooperation. However, we focus more on the quality of processes and the level of institutional capability of the organisations already engaged. It is important for them to be full-fledged partners and initiators of subsequent joint projects, innovations and changes in the city’, believes Oksana Bondar, regional coordinator of the PLEDDG Project in Vinnytsia Region, chairperson of the Vinnytsia Regional Information Centre ‘Creative’ and hub user.
An important starting point for continued development of the NGO Hub was the agreement executed in early 2018 with the PLEDDG Project on financial support for the hub as part of the Democratic Governance and Development Initiatives Support Fund. A special project called ‘Meaningful City: Communication and Participation Space’ has been underway since then. An optimal partnership formation model was chosen with the help of external experts: 33 NGOs have joined the Misto Zmistiv NGO Network since the time when it was formed in July 2018.

With the expert support of the PLEDDG Project, a development strategy was additional devised for the hub complete with a branding platform and a communications strategy as well as a business plan whose concept provides for financially self-sufficient operation of the centre. The overall organisational strategy not only outlines the mission, values and principles of cooperation for the NGO Hub but also formulates clear tasks and key priorities, as well as the key aspects of the hub’s activities. They are: private-public partnerships, development of the community’s potential and a search for global meanings. The communications strategy also outlines the portraits of target audiences and specifies the key messages addressed to each one of them, formulates communication goals, tools for achieving them and indicators for measuring performance. Business plan development outputs include a marketing strategy of the hub, a business model and a financial plan. The informational, awareness raising campaign and a website for the NGO Hub were developed and launched.

‘The physical space of the hub enables organisations to stay within one another’s field of vision, take a greater interest in who is working on what and what activities they are holding. We expected the creation of the hub and a shared vision of its development to unit representatives of Vinnytsia’s civil society and bring together active organisations, and this objective was achieved already during the first year NGO Hub’s operation. In 2019, we’ve raised to a new level of cooperation between civil society institutions and City Hall, and achieved more contacts and interactions with various City Hall departments, increased the number of joint projects and, accordingly, eliminated the sense of separation.

In devising the hub development strategy, the process itself was important to us in the sense that during this time in particular many participants actually developed a share vision of the direction we need to move in in general and expectations regarding potential projects. The communications strategy developed with the support of the PLEDDG Project gave us a clear understanding of who our target audience was and how to communicate with them correctly. For during the first year of our work we had to explain the concept of NGO Hub to the representatives of NGOs themselves: what a hub is, what kind of partnerships exist here and what the benefits of joining them are. Subsequent stages will involve explaining to city residents what is happening here and how they can join in’, says Alina Dyachenko, director of the communal enterprise City Development Institute, which implemented the ‘City with a Meaning: Communication and Participation Space’ project and co-founded the hub.

Misto Zmistiv Hub is a unique amalgamation of activists with shared values, who work, study and create change in an informal and friendly setting. The platform offers access to essential tools for implementation of various social ideas: in addition to premises and equipment, it offers the indispensable experience of experts at partner organisations and the coordination council, donor relations and social capital. Win-win partnerships are formed here in an informal setting. 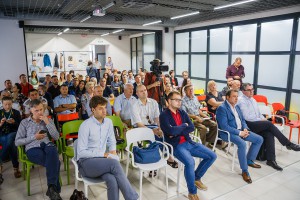 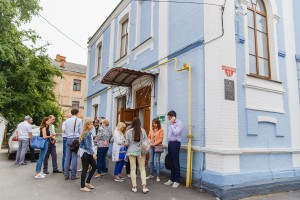 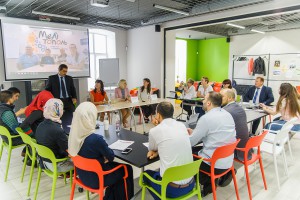 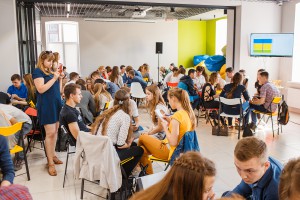 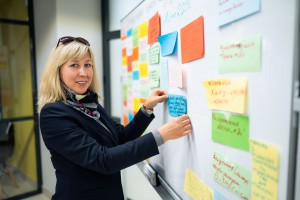 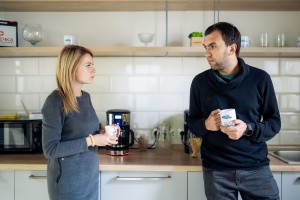 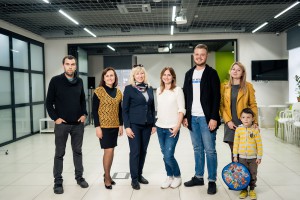 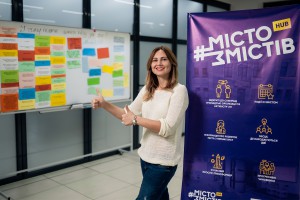 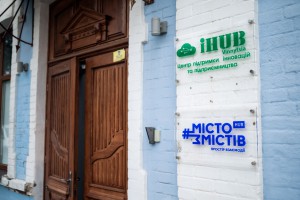 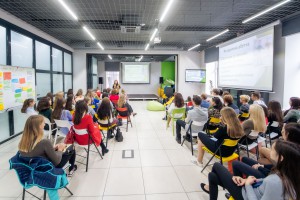 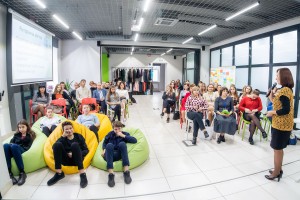 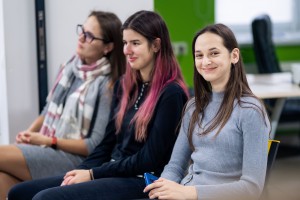 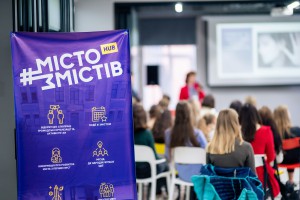 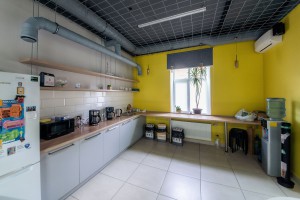 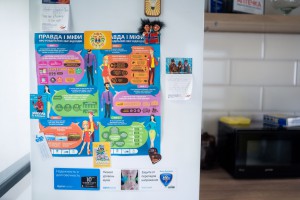