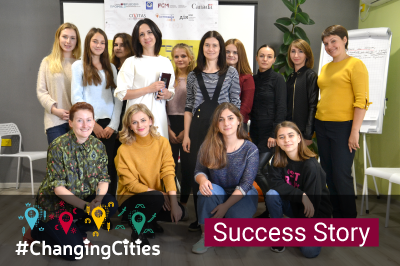 In 2019, the Association of Ukrainian Cities (AUC) staged its third competition of short-term gender initiatives aimed at promoting women’s involvement in local economic development, with support from the International Technical Assistance Project “Partnership for Local Economic Development and Democratic Governance” (PLEDDG). One of the winners is the NGO “CIVITAS Social Action Centre” with a project designed to enhance the impact of local decision-making by women from the Hoshcha District and the Smyha United Territorial Community of the Rivne Region. The initiative calls for the establishment of NGOs and aims to popularize local women’s successful practices. Activists are certain that these very tools can accelerate the process of debunking social stereotypes about the role of women in community life.

A high-quality communications campaign was the first step to get women from the Hoshcha and Smyha communities onboard. It included regional TV broadcasts, publications in the local media, and outreach via social media. In late September 2019, the “Workshop of the City of Rivne”, a public space, hosted a conference entitled: “Gender Initiatives Develop Communities: Stories of Experience”, which drew over 40 women activists from the Rivne, Volyn, and Ternopil regions.

“Speakers shared valuable aspects of their experience of involvement in the public and political life of communities. The event also featured a discussion of algorithms and approaches to forming an inclusively sensitized environment in communities, an analysis of existing stereotypes about women bosses, and sharing of individual successful practices that change the life of villages, townships, and cities for the better. We succeeded in capturing the interest of a wide range of women from different districts of Rivne Region. As a result, two driven groups of women formed and began drafting charter documents for the registration of NGOs in their communities right after the conference,” said Viktoria Kostiuk, Project Leader.

The project in Smyha resulted in the creation of the “Tone of Change”, a community development agency NGO, while the team in Hoshcha launched the “DiyaMy Women’s Initiative Platform”. Their development strategies were mapped out and operations planned during a series of targeted educational events. Strategic sessions and trainings were held separately in Smyha and Hoshcha, with close to 40 women joining the training in each village. Effectively, the women formed separate teams in their communities and jointly formulated the goal, mission, objectives, and values of the newly-created organizations. In addition to strategizing experience, the participants acquired project management knowledge. This helped some of them to successfully prepare applications for the NGO projects competition in their community and emerge victorious.

“The Tone of Change” community development agency picked rural women up to 35 years old as our target audience. For the time being, we are focusing our efforts in two sectors: first aid training and financial literacy. In 2021, we plan to focus more narrowly and work as a women’s entrepreneurship promotion agency. We will help women launch their own startups, so that more and more women in our communities become self-employed and independent of men or circumstances. Unfortunately, it so often happens that women who cannot ‘discover themselves’ at home leave for big cities or migrate abroad for work. In doing so, they abandon their families, get divorced, and lose contact with their children.” says Viktoria Kostiuk, Project Leader and Chairperson of the “Tone of Change” community development agency NGO.

The DiyaMy Women’s Initiatives Platform was created in the wake of a gender project called “Success Story: Women in the Limelight”, which was implemented at the Hoshcha Village Council and was named in 2018 as the best NGO initiative carried out in a small Ukrainian community. This brought together a team of women in Hoshcha District, who identified the creation of an effective NGO as one of the priorities for continued development of their community.

“The DiyaMy Women’s Initiatives Platform currently stages informal educational events for women residing in the Hoshcha community. We invite the best coaches and speakers in the relevant fields and help women write projects. It is extremely important for me to arrange the training at a high level so that it is not skewed by provincialism The DiyaMy Platform has built a solid reputation over the year that it has been around, and women already know that if we are putting together an event, it is definitely worth attending. We have already held a series of activities focusing on psychology, presentation, and self-promotion skills. Trainees can see that the knowledge they acquire brings about tangible changes in their lives. We are also happy to share our experience: we visit neighbouring communities in Rivne Region and discuss our path toward creating an NGO, while highlighting all of the finer points,” says Natalia Kalka, Project Co-author, and Leader of the “DiyaMy Women’s Initiatives Platform” NGO.

Apart from creating new NGOs, the initiative involves activities aimed at mainstreaming the idea of gender equality, and shedding light on the need to get women involved in community development. One of the promotional tools is a series of social videos that tell stories of women who live and work in the Hoshcha and Smyha communities. The videos feature women directors of educational and cultural institutions, a family doctor, a businesswoman, parents of children living with disabilities, and women leaders of the new NGOs. We expected the videos to get close to 10,000 views, but the actual figures exceeded our expectations threefold. One of the protagonists of this series of video stories is Iryna Hnatiuk, a mother of many children, director of a community centre in the village of Bereh, and member of the youth council of the Smyha United Territorial Community.

“For the past five years, my family and I have been living in the village of Bereh in the community of Smyha. Even though we moved here from the Mykolayiv Region and one could say that I’m ‘not a local’ here, I am never indifferent to what is happening in the community in general and in the village in particular. First and foremost, I want to create quality pastime opportunities for local children and adolescents.

This year I gladly participated in a training course delivered as part of a gender initiative. I was most captivated by the idea of writing a development strategy for an NGO. I never once regretted participating: it was really interesting and I gleaned lots of useful insights. In the fall, I ran in the election for a seat at the Smyha Village Council. Even though I did not receive enough votes, I am not discouraged. I have my ambitions and will keep moving in this direction. I believe in the potential of my community, and I trust that I can have an impact on its life. Lately I’ve been seeing a growing number of active women all around me. They want to show their skills, learn, grow professionally, and be an active part of the community. I believe that diverse outreach and training activities bring about significant mindset changes and the attitude among women towards themselves,” says Iryna Hnatiuk, project participant.

In February 2020, the newly formed NGOs, the “CIVITAS Social Action Centre”, and the “Rivne Regional Office of the AUC”, signed a memorandum establishing a coalition: “For Equal Opportunities”. Other NGOs and local government bodies will be able to join it in the future. The coalition team hopes that the experience acquired by them will be gradually expanded to other districts of Rivne Region, and the association of NGOs will lay a groundwork for cooperation among rural activists, promote an active community life and involvement in local decision-making.

“For me personally, this project represents invaluable experience and colossal progress. There have been scores of qualitative changes, and we’ve built countless valuable contacts over the course of the year. What’s important is that the project has not just succeeded: its fruits continue to multiply and become more visible with each passing day. It makes me happy that women in our community are finding opportunities for self-fulfillment outside of their households. Ideally, I would like as many women as possible to become members of local councils and get involved in a variety of activities. This would create the so-called “snowball effect.” The experience acquired by women accumulates, gets integrated into family life, and changes the quality of their pastimes and communication. Since the overwhelming majority of our participants are educators, they bring their new-found knowledge to schools and kindergartens. Within our small rural community, positive changes are truly palpable,” Natalia Kalka adds.

Hoshcha and Smyha activists continue to liaise, generate new ideas for cooperation, and are now becoming drivers of local change themselves. Women run for seats on local councils, acquire experience, and gradually occupy active positions in communities. They will continue to make their voices ever louder and share successful experience with others, thereby building a society in which women and men will have equal opportunities and means of utilizing them.