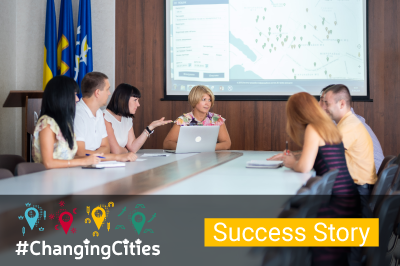 In recent years, Ukraine has been making confident progress towards setting up a “service state” model and transitioning to digital communications between government agencies, utilities, and the population. Meanwhile, local government agencies are implementing electronic document workflows, creating user-friendly platforms for open data publication, and actively introducing electronic channels for communication with the public. For instance, Horishni Plavni has launched an info portal based on a geo information system (GIS), which has become an effective tool for feedback between city residents and community services. In 2018-2019, the platform functionality was significantly upgraded as part of the project titled “Expansion of the Features of the GIS Info Portal in the City of Horishni Plavni as a Feedback Mechanism for Public Services”. The system upgrade was possible because of support from the International Technical Assistance Project: “Partnership for Local Economic Development and Democratic Governance” (PLEDDG).

The GIS portal is currently visited by 50 unique users on an average day. It offers Horishni Plavni residents comprehensive access to online information and documents, supports interactions with the municipal authorities, and facilitates effective cooperation among different levels of government as they perform their official duties. Portal features have been expanded as part of the project: public requests are now automatically forwarded to the relevant services, since the portal is fully integrated into the electronic document workflow system of the executive authorities at the city council. Fifty suites of specialized software called: “KAI Document Workflow/Electronic Document Workflow” were purchased for executive committee employees to take full advantage of the upgrades.

“This software shortens the path of correspondence to the actual official responsible for acting on it, makes the loss of documents next to impossible, and enhances control and executive discipline. The application can be used for processing letters, internal documentation, and the registration of public queries and applications. A key advantage is clearly structured accountability and considerably more streamlined procedures.

For example, a letter from the regional administration with a specific assignment and a fixed deadline arrives in the mailbox. It is imported straight into the incoming document card via the electronic document workflow system. A ‘route’ is mapped for the document. The city mayor signs off on it, chooses the last name of the official tasked with acting on it, and sets a deadline. The designated official automatically receives the assignment along with all the attached files, and proceeds to prepare the outgoing letter card with the relevant particulars already filled in, based on the incoming document card. The official then adds the response and initiates the approval route. The letter is sent for approval successively: the letter will not be sent to the next official unless the previous official reviews it first. Once the city mayor has approved the completed assignment, the front office registers the outgoing letter and sends it. Citizen requests are handled according to the same scenario: meticulous, but also logical and simple,” says Roman Dykyi, Chief of the Computer Hardware and Information Systems Department at the Executive Committee of Horishni Plavni City Hall, Poltava Region.

Now all public queries and applications are entered into the electronic document workflow system. Since the portal went online, it received a total of 153 queries, 109 of which were public. The remaining ones are confidential. Project Director Olha Ovchynnikova expects the channel for electronic communication with the municipal authorities to expand even more over time.

“A person who approaches us with a problem receives an email notification that a process owner has been appointed. This can be a specific municipal structure or division. Whenever the information needs to be updated, the applicant can call the process owner at the phone number specified. The relevant documents dealing with the issue that has been resolved are openly attached to the email as a response to a public request. Users can only see confidential requests in their personal accounts on the portal,” says Olha Ovchynnikova, Director of the Department of Economic Development and Resources of the Executive Committee of Horishni Plavni City Hall.

In addition to simplifying communication with local citizens, the portal also facilitates coordinated efforts on the part of the municipal services. Another stage of its development involved the launch of a dedicated module for managing the city’s housing and utility infrastructure. It is a full-fledged software solution for automating the recording and updating of information based on electronic data sheets of all buildings belonging to the city’s territorial community. Previously, almost all the data sheets of the housing and utility infrastructure facilities in Horishni Plavni (much like in many other Ukrainian cities) had been in hard copy form only and made quick and transparent access impossible. For the time being, the module is intended for official use only and is not yet public: it is used by municipal utility companies and certain city hall departments. Over 80 executive officials of the city council, representatives of utility companies, relevant institutions, and dispatchers, completed training on how to use the system effectively.

“The info portal currently has information about all of the city’s blocks of flats, including 36 buildings where condominiums have been created. This is the only online platform that has gathered all the information about the housing infrastructure of Horishni Plavni and the performance of utility services. I am certain that this module greatly simplifies the work of the relevant services and makes their interactions seamless. The system lets users both view information and generate work reports with ease,” Olha Ovchynnikova adds.

The portal also serves as a source of reference information for the public. The city’s interactive map shows current descriptive and contact details of various municipal facilities: from utility companies and municipal services to pharmacies, restaurants, and points of interest. Project implementation resulted in the creation of specialized software that allows creating countless layers of the geo information system based on the city map and adding new facilities. The map currently shows information regarding over 1,400 social, cultural, sports, utility, and transport facility infrastructures. Information is regularly updated: data from various entities are received and processed by the municipal electronic hardware department.

With PLEDDG support, Horishni Plavni implemented an integrated and effective mechanism for communications between executive authorities of the city council and utility services on the one hand and city residents on the other. Active use of the info portal will help the community exert influence on the city’s administration system, make the authorities more accountable, encourage employees of the executive authorities and utility companies to be more diligent in their duties, while taking into account the needs of the community. The gradual process of digitalizing communications from the authorities is helping to expand the open governance model: maximum public information, transparent and efficient decision-making, and regard for community opinions.