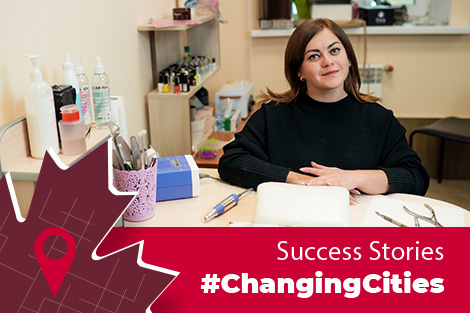 Ukraine’s first inclusive manicure parlour opened for customers in Vinnytsia, where services are provided by manicure artists in wheelchairs. Named ‘Dandelion’, this mini-parlour is a one-of-a-kind social initiative aimed at popularizing the idea of creating jobs for people living with disabilities not just in Vinnytsia but in other regions as well. The manicure parlour was equipped and opened with the support of the PLEDDG Project as part of the integrated project titled ‘Socialization of People Living with Disabilities Through Entrepreneurship in Vinnytsia’.

Ukraine is home to some 3 million people living with disabilities, 2 million of whom are part of the working-age population. However, according to the Ministry of Social Policy, only 540,000 of such people are employed. Unfortunately, it is common for people with disabilities to be left out of the labour market even when they are qualified to work. One of the reasons is that employers are unable to offer a workplace adapted to the needs of a person with disabilities and are reluctant to incur the extra cost of equipping it. As a result, many employers are biased when it comes to the physical or mental capability of employees with disabilities to perform the necessary tasks.

‘Harmony’, a Vinnytsia-based NGO for young people with disabilities, whose mission is to promote an inclusive environment with equal opportunities for all, decided to do something about this state of affairs in their own city and began creating social businesses. The ‘Dandelion’ manicure parlour actually became their first successful attempt.

‘Among the customers of the Dandelion manicure parlour are those who come specifically with the intention of supporting the people with disabilities. Also, visitors of the Harmony rehabilitation centre began coming here, which came as a pleasant surprise to us. Many of them used the services of a manicurist for the first time in their life. Unfortunately, the lives of many visitors of the Harmony centre are limited to their homes, the rehabilitation centre and the hospital, but now they are also returning customers of a manicure parlour. But this is only logical: we have a comfortable and convenient environment for them; they don’t have to deal with infrastructural inaccessibility problems or overcome internal mental obstacles on the way to receiving a service. After trying it once and getting positive emotions out of the result, ladies keep returning time after time’, says Liudmyla Netskina, chairperson of the managing board of Harmony NGO.

The manicure parlour is housed in the Harmony rehabilitation centre for people living with disabilities, at 5 Vynnychenka Street. With the financial support of the PLEDDG Project, it was furnished with essential equipment and materials: lamps, instrument sterilizer, sharpeners, brushes, nail polishes, etc.

‘I learned the art of manicure at courses offered by the Podillia centre for rehabilitation of people with disabilities based in Vinnytsia. I spent a long time working from home but then got invited to work at Dandelion, and I gladly agreed. My work is also my hobby and a source of essential communication with people. Dandelion currently has two manicure artists. We also perform eyebrow adjustments in addition to manicure. We plan to growth further and make the parlour more comfortable, thereby improving our chances of attracting more customers. Yet I am already very happy with my workload. People learn about us from social network ads or by word of mouth. Many customers come to us straight from the street. We have put up a notice board advertising our services next to the entrance to the Harmony centre, and it works’, says Natalia, an employee of the Dandelion manicure parlour.

Training was a preparatory stage for people with disabilities, which preceded the launch of this business. In addition to master classes in hand-made and manicure, three thematic trainings were given: ‘How to start and conduct your own business’, ‘Reporting’ and ‘Customer relations’. These trainings were attended by 30 people. They say that studies helped them gain insights into the subtleties of doing one’s own business, acquire valuable knowledge about entrepreneurship and employment in general, comprehend risks and decide for oneself whether they actually wanted to proceed with starting their own business.

‘The earnings of the Dandelion club are partly used to pay the manicurists’ wages and partly to replenish the stock of materials. Whatever is left we set aside in order to soon announce a mini-competition of social initiatives specifically intended for people with disabilities. In doing so, we want to bring somebody’s dreams to life.

The overriding goal of the project titled ‘Socialization of People Living with Disabilities Through Entrepreneurship in Vinnytsia’ was to help people understand that they can work not just as hired workers but can also launch and conduct business of their own. PLEDDG helped us both with the training aspect and with actual equipment of the newly created workplaces. I think we succeeded in attracting the city community’s attention to the problem of employment of people with disabilities. Personally, I received a fresh perspective on the problem of employment of people living with disabilities. I used to think that all people wanted to work but simply could not find a job for themselves in the labour market. However, as I became more involved in the project and spoke to others, I found out that the problem was not limited to employers but also extended to people with disabilities. It is common among them not to know their own rights as well as major mental obstacles when it comes to socialization. Our project shows people with disabilities that anything is possible and they simply should act’, says Liudmyla Netskina, chairperson of the managing board of Harmony NGO.

In 2019 the Harmony team continued implementing the project to facilitate socialization of people with disabilities by launching a mini coffee shop at the Megamall retail and entertainment centre: it is staffed by three baristas with disabilities. Owing to support from PLEDDG, the coffee shop was equipped with special furniture and coffee machines as well as utensils and consumables. Meanwhile, the Dandelion manicure parlour offers for sale modern eco-bags crafted by blind people. This is yet another opportunity for people with disabilities to become financially independent. In this way, project initiators are trying to make integrated steps toward development of social entrepreneurship in the city.

PLEDDG offers all-encompassing support for the development and activities of small and medium businesses in the regions, thereby stimulating and supporting their growth. At the same time, project activities are focused on promoting an inclusive environment where each person is a full member, has access to services and can realize their potential. Initiatives aimed at creating jobs for people with disabilities represent recognition of the fact that everybody can be competitive in the labour market, and this is an important step toward shaping a holistic inclusive environment in the country. 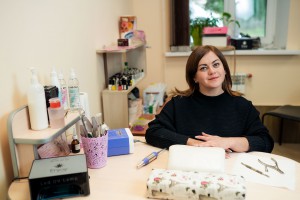 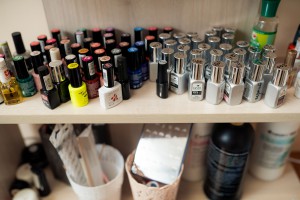 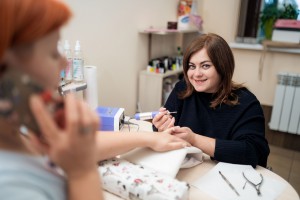 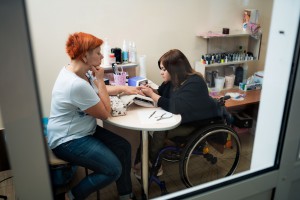 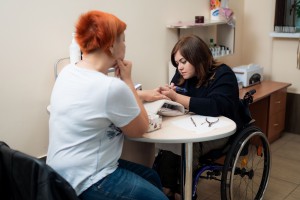 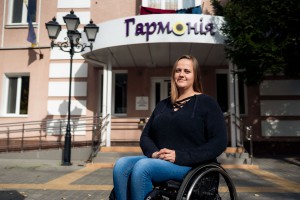 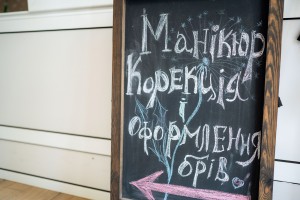 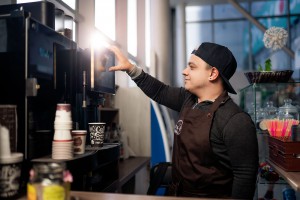 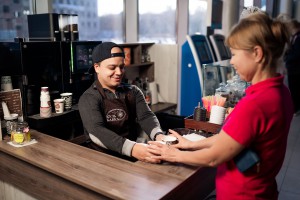 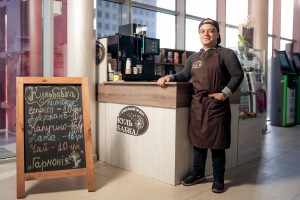