Five Years and Counting: The City of Berdyansk Continues to Allocate UAH 1.5 Million to Its Participatory Budget 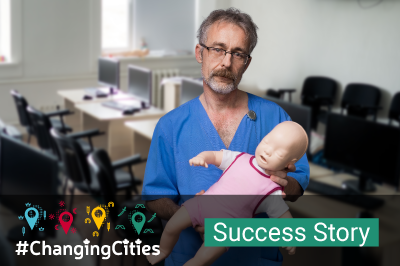 A participatory budget is a common European practice that promotes a dialogue between the authorities and citizens, which has been increasingly embraced in recent years by democratically-minded Ukrainian cities and united territorial communities. This democratic tool enables all communities, without exception, to participate in the allocation of local budget funds by creating city improvement projects and/or voting for them. The participatory budget enables residents to influence the allocation of funds and is a source of ideas for strategic local development for the authorities.

Berdyansk’s experience in this domain began in 2016 when the city council approved the Policy on the Participatory Budget. Since then, a portion of the city’s funds is annually directed toward the funding of community initiatives that have been selected through an open and transparent competitive process. The annual participatory budget of Berdyansk is UAH 1.5 million. Funding is allocated to those projects of territorial community members that can be implemented in the space of the budget year: minor projects with funding of up to UAH 100,000, and major projects worth UAH 100,000 to 500,000.

The participatory budget in Berdyansk is being implemented via the ‘Community Project’ platform that helps automate the participatory budgeting process. The portal was launched in 2016 by the Ukrainian technology NGO, SocialBoost. ‘Community Project’ enables participation in the competitive process without leaving the comfort of one’s home: an application can be submitted online and its status monitored on the website. The platform currently unites over 80 Ukrainian cities and communities, with upwards of UAH 390 million allocated for the implementation of their projects.

A participatory budget is effective as it allows meeting the needs of communities by giving them actual control of the funds. The city authorities of Berdyansk are committed to promoting swift development of e-governance in the city. To this end, they look to spread as much information about e-democracy tools as possible among the local population. With the backing of the PLEDDG project, Berdyansk is implementing an initiative called ‘Participatory Budget – Effective System of Government – Community Cooperation’, which calls for all sorts of promotional activities to popularize the participatory budget in the city. As part of the initiative, the city received exhibition structures, banners, and other equipment/materials that helped raise the promotion of public service projects to a whole new level.

‘In order to attract district community initiatives, we hold meetings with heads of district committees, publish information about participatory budget implementation through mass media and on the city’s electronic and static billboards, and organize topical televised broadcasts. The City Hall website has a section called “Community Project”. We also display the public service projects that will be voted upon. We are now discussing with colleagues this year’s best venue to set up bulletin boards with project presentations. We are considering the municipal Culture Palace as an option. We want to pick one or several convenient locations where city residents could come after work and learn about initiatives of their fellow citizens’, says Yuliya Doynova, Deputy Mayor of Berdyansk, responsible for the activities of executive government agencies.

For representatives of the partner cities, the PLEDDG project organizes study tours to Canada and Poland to share best international practices in democratic governance, local economic development, etc. Representatives of Berdyansk joined the Ukrainian delegation to learn about the practical experience of municipalities in Poland. Polish colleagues shared their experience implementing modern initiatives and technologies, focusing on the finer points of participatory budget implementation. In 2018, drawing from the positive experience of Polish cities, Berdyansk authorities implemented a strategically important innovation: they divided their participatory budget into the city-wide budget and the district-specific budgets.

‘Since 2018, nearly 30% of the total participatory budget has been allocated for city-wide projects, while almost 70% is directed to local projects. In 2020, the share of the participatory budget allocated for city-wide projects increased to UAH 500,000. Funds are distributed among 14 districts of the city, depending on their population size. This allocation enables city districts to develop and improve their infrastructure and territories. For the convenience of residents, votes can be cast online or using paper ballots in each district. We take pride in the fact that Berdyansk residents are very active and engaged when it comes to their city: a total of 272 projects were submitted in the space of 5 years. 53 projects were selected, of which 38 have been implemented, and 15 more are in progress’, Yuliya Doynova adds.

Ukrainian cities commonly practice dividing community projects into major and minor ones. The former usually concern infrastructure, and their deliverables benefit the entire community. Minor projects are aimed at identifying and meeting local social needs or, for example, building playgrounds or sports grounds. The division into city-wide and district-specific projects is an individual choice of the city in question and depends on the goals of the organizers of the participatory budgeting process.

‘A fitting example is the experience of the town of Swidnica in southwestern Poland. The local mayor was committed to developing the town’s infrastructure in general, which is why the projects were exclusively city-wide. When the city authorities changed, so did the approach to the participatory budget. The new town mayor began informing the community and consulting local residents actively. She found it important to hold more meetings and encourage residents to come up with projects. Hence the decision to divide the city into districts and allocate a separate amount to each district for project implementation. This allowed city residents to have more discussions and meetings with officials and prepare more projects’, says Leonid Donos, Chief Expert with the PAUCI Foundation.

In 2020, Berdyansk residents submitted 54 projects worth over UAH 8 million for the participatory budget competition, with the voting on them scheduled to begin in September. More than a third of all projects are in the education category: Berdyansk residents propose creating a free co-working space at the Children and Youth Creativity Centre, reopening the children’s and youth’s space observatory, creating an interactive artificial rock climbing facility, equipping school assembly halls and sports grounds, etc. Residents want CCTV cameras installed at cultural establishments, propose illuminating pedestrian crossings, setting up art displays, and numerous other ideas on various themes.

‘Even though the COVID-19 pandemic provoked a large-scale economic crisis and our community did not escape unscathed, the city authorities never questioned the implementation of the participatory budget. This year we have recorded a 35% increase in citizens’ involvement compared to last year. We are glad that despite these challenging times we are managing to maintain cooperation with the community at an appropriate level and bring about quality changes in the city through a collective effort’, Yuliya Doynova says.

The implementation of participatory budgets contributes to a systemic dialogue between local government agencies and residents, special initiative groups, and NGOs that operate within the city or the united territorial community, all for the benefit of the local community. As part of efforts to promote participatory budgeting, since 2016 Ukraine has been hosting annual international forums that help find answers to common challenges and develop a multinational community of participatory budget practitioners. These activities are organized by the Polish-Ukrainian Cooperation Foundation PAUCI with the unfailing support of the PLEDDG project.

15 partner cities of the PLEDDG project currently implement participatory budgets: Vinnytsia, Zhmerynka, Khmilnyk, Ivano-Frankivsk, Dolyna, Kolomyia, Poltava, Myrhorod, Kremenchuk, Horishni Plavni, Zaporizhia, Enerhodar, Melitopol, Berdyansk and Yaremche. The total amount of funding allocated for the implementation of winning projects exceeded UAH 77 million in 2020. This tool gives the community access to management of municipal funds, while also symbolizing the readiness of the local authorities to be open and make decisions in a transparent manner.

* The photo shows the trainer of the Contemporary Medical Training Center in Berdyansk. The first aid training equipment was procured within participatory budgeting project implementation in the city.