European Charter for Equality of Women and Men: Over 60 Ukrainian Cities Look to Ensure Principles of Gender Equality 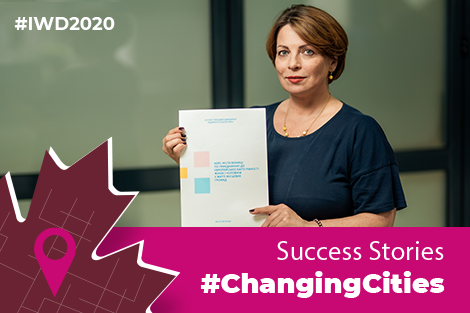 Over the past four years, PLEDDG has actively worked to promote gender equality in Ukraine in collaboration with the Association of Ukrainian Cities (AUC), which represents more than 872 territorial communities across Ukraine and lobbies for the interests of local communities. The European Charter for Equality of Women and Men in Local Life has become a practical tool for implementation of gender equality policy at the local level. Vinnytsia, a partner city of the PLEDDG Project, became the first signatory of the Charter in Ukraine in 2017. Now over 60 Ukrainian cities have joined the Charter.

Virtually all European cities have already ratified the European Charter for Equality of Women and Men. Meanwhile, this movement is picking up pace in Ukraine: Odesa, Zhytomyr, Kharkiv, Irpin and others became registered signatories in the footsteps of Vinnytsia. As of February 2020, 64 Ukrainian cities passed the final Charter signing stage and more than 20 are in the process of joining it. Their decision is founded on a conviction that regard for the interests, potential and needs of every gender is of exceptional importance when it comes to making informed decisions and fairly allocating resources, privileges and responsibilities among women and men as well as providing equal access to services and benefits of local economic growth.

The Council of European Municipalities and Regions drafted the European Charter for Equality of Women and Men in Local Life in 2004 as one of the fundamental documents to assure gender equality. The Charter helps local self-government bodies achieve equality in communities through identification and minimization of risks of discrimination based on gender, race, ethnic or social origin, genetic features, language, religion or beliefs, political or other views, ethnic minority status, property status, place of birth, disability, age or sexual orientation.

‘Charter signatories change primarily the very approach to work. Local self-government bodies publicly acknowledge their readiness to work according to European principles of gender equality. Within two years of acceding to the Charter, the city has to draw up an Equality Action Plan outlining the priorities, actions and resources toward their achievement.

The Association of Ukrainian Cities is actively promoting gender equality in the country jointly with PLEDDG. We work along two primary lines: support of the Gender Equality Committee at AUC, with which everything began in 2012, and the annual forum of Charter signatories created at PLEDDG’s initiative. We all realize that promotion of gender equality is an integrated process, and every step forward matters’, says Volodymyr Nyzhnyk, PLEDDG-AUC project manager and national coordination of Charter implementation.

The problem of inequality of opportunities available to different social groups, women and men is inherent in every aspect of social life, which calls for focusing attention on this problem and beginning work toward creating a fair society. In 2019, Ukraine ranked 65th among 149 countries on the global gender gap index, with a parity score of 70.8%. Despite some progress made each year, the two most complex remaining gender gaps have to do with equal economic opportunities and engagement in political life.

The local level is currently the primary platform for implementation of quality changes, particularly in the context of decentralization of power. The biggest challenge for local self-government bodies involves considering gender specifics in the context of planning, since the local authorities have the widest powers when it comes to analyzing the needs of women and man as well as powers to plan the development of the community. As mentioned earlier, Vinnytsia has become the first Ukrainian city signatory of the Charter. The idea for this move came about during discussions at meetings of the Gender Equality Committee of the AUC and was supported by PLEDDG funded Gender Equality initiatives competition. The PLEDDG Project supported Vinnytsia in drawing up a roadmap toward promoting the implementation of commitments under the European Charter for Equality.

Our organization lobbied for the decision to sign the European Charter for Equality in Vinnytsia and, working in collaboration with the Social Policy Department at City Hall, drafted the Community for Equality Program aimed at ensuring equal opportunities for men and women up to 2023. Education remains a weighty component of this Program, since the number-one objective of the Program is to enhance the ability of representatives of local self-government bodies to consider the gender perspective in city hall projects and programs, the essential precondition for this being the level of gender sensitivity of authors of this Program.

We also plan conducting a gender analysis and preparing an updated gender profile for the Vinnytsia City Amalgamated Community that was formed in November 2018. We might identify additional groups of people whose needs should be considered. We plan trainings in gender-oriented budgeting. The program also includes plans for a component involving balanced representation at elective bodies: a Memorandum will be signed with leaders of political parties in the Vinnytsia City AC with a view to complying with legislatively prescribed gender quotas in order to increase the number of women nominated on party election rosters’, says Svitlana Khodakova, chairperson of the managing board of the NGO Open Society Local Democracy Institute and expert on gender issues.

Being aware of the economic arguments in favour of gender equality and wishing to get more women involved in business, PLEDDG also supports initiatives aimed at empowering women to pursue successful business activities: the Ukrainian Women’s Congress, the All-Ukraine Competition for Best Women’s Initiatives in Economic Development of the Community, celebration of International Business Woman’s Day.

‘In my opinion, we should focus on three key aspects on our way to gender equality in Ukraine: strategic, political and economic. First, in planning local development one should always consider the fact that the community is not homogeneous, and the needs and interests of all population groups should be considered. For example, PLEDDG supports city development strategies. Before they are passed by city councils, the strategies pass the mandatory analysis of gender aspects. Second, more women should be engaged in politics across all levels of government. We have a situation in the country where the higher the level of government, the lower the representation of women there. Only 20,28% of parliament members are women. Numerous studies prove that at least 30% of women have to be involved in politics at all levels of government: this is a critical mass that sets in motion an irreversible process. It is also important that cities receive support in drawing up action plans to implement commitments under the Charter.

Third, there is the economic aspect: we need to create and lobby for conditions conducive to development of women’s business. For the third year running, the AUC as part of the PLEDDG Project is successfully holding a competition to award funding for short-term gender initiatives aimed at promoting women’s involvement in local economic development. The number of applications in 2018 increased almost five times over from the year before. As of 2020, 24 initiatives have already been supported, including: private enterprise trainings for women, raising public awareness, gender profiles and passports, a handbook on integration of the gender component for local self-government bodies, campaigns for women’s involvement in politics, business, and the IT sector, an internship program for women at city council, etc. This competition aims to not just bring to life the initiatives of the winners but also spread their experience to other cities, popularize and replicate the idea., says Olena Tykhomyrova, PLEDDG Project expert on gender equality.

The signing of the European Charter for Equality of Women and Men is an important step forward in the development of local communities. For the first time, the process of recognition of the importance of equal rights and opportunities of people irrespective of their gender has become irreversible on the nationwide scale and is expanding further. In collaboration with the Association of Ukrainian Cities, PLEDDG joined the process of implementation of the European Charter for Equality in Ukrainian cities and continues to provide assistance to the signatory cities.