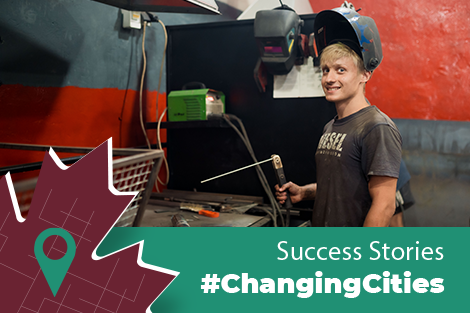 Ukrainian society has been faced with a major challenge for several years now: finding a way to help those who lived through the war. In addition to legal aid and medical, psychological and social rehabilitation, an integral part of helping veterans properly and fully adapt to civilian life is the economic component. For this reason, special attention is being focused on providing opportunities for them to find work.

The PLEDDG Project has also been engaged in supporting veterans and within PLEDDG SME Development Fund provides its resources to encourage initiatives to assist veterans of the conflict in gaining the necessary qualifications and finding suitable work. One of the winning projects of a competition for special grants under the Fund was the “Establishing Conditions for the Professional Development of ATO Veterans in Zaporizhzhia” project, which was submitted by the Veterans’ Society of Zaporizhzhia NGO. This Zaporizhzhia project was intended to help demobilized soldiers return to an ordinary, full-fledged life and, among other things, find a steady job.

The project plan was to set up a pilot professional development center for re-training ATO veterans to be gas and electric welders. Specialists from the Zaporizhzhia Training Course Plant subsidiary at which training took place, adapted their curriculum to the approach and timeframes of the project, which had two groups of veterans training for 2.5 months each. As a result, 42 ATO veterans had received certificates as professional welders.

“With funding from the PLEDDG Project, we rented premises where everything continues to operate, together with welding and other equipment that we purchased. In order for ATO veterans to find out about our initiative, we launched a major awareness campaign, focusing mainly on veterans’ organizations and local, county and oblast enlistment offices. The city authorities helped enormously by making it possible for us to air several videos on the municipal television channel. Channel 112 also helped by broadcasting stories about us across Ukraine. At the same time, we actively used our site and our Facebook page to disseminate information. As a result, nearly five times more people applied for our courses than we had places for in the first two groups, so we chose participants on a ‘first come, first served’ basis,” explains Bohdan Pryshchenko, coordinator of the “Establishing Conditions for the Professional Development of ATO Veterans in Zaporizhzhia” project.

For the majority of demobilized veterans, finding a job and adapting to civilian life remain urgent and unresolved problems. The main factors getting in the way of a solution are lack of information about available vacancies in the SME sector and lack of suitable qualifications for the current needs of the labor market.

Ihor Protsyshyn was in the ATO zone from February 2015 to April 2016. He says that he’s spent many years working with metal and loves this work. But he wasn’t able to officially work as a welder at any company in the past because he lacked the necessary diploma to confirm his skill level.

“I’ve been welding for more than 10 years and gradually picked up all the skills involved in this trade on my own. But as a rule, self-taught welders are not officially employed in this sphere. You have to have documents that confirm your qualifications. No employer’s going to take your word for it that you’re experienced. Before I went to the ATO and since I came back, I worked as an automatic and semi-automatic machine tool lines operator at the Eliz company in Zaporizhzhia. I found out about the professional development project from people I knew at Zaporizhzhia City Council who were urging ATO veterans to participate. As a result, about 20 guys from our Shyrokiv UTC took advantage of the opportunity to learn under the project and get the necessary certification. I trained in the first group. We had a great teacher who knew how to explain everything in an easy and interesting way, and we all gained knowledge and skills that we did not have before. When the course ended, I finally had a chance to be hired officially as a welder on attractive terms at several companies at the same time. Unfortunately, I had to turn them down simply because they were all located far from where I lived as I’m in a village just outside Zaporizhzhia. I didn’t want to waste the effort that had been invested in me or let down a potential employer by finding myself unable to fulfill my job duties, say, because of bad weather, which we get a lot. So right now I’m looking for a job as a welder in Zaporizhzhia or close-by and in the meantime I travel abroad to temporary jobs. The certificate I earned is also accepted there as proof of my qualifications,” says Ihor Protsyshyn, an ATO veteran and participant in the “Establishing Conditions for the Professional Development of ATO Veterans in Zaporizhzhia” project.

The case of Ruslan Peydanovskiy, another veteran, is quite different. He had never worked with metal in the past or welded anything. He explains that he joined the Ukrainian Armed Forces under contract and was at the front over 2016-2018. After returning, he was unable to get work in Zaporizhzhia, so he registered with the Employment Center.

“I actually found out about the professional retraining of ATO veterans from the Employment Center. I was happy to hear that the program was completely free of charge and I joined the second group in the fall. I haven’t regretted it for a moment. Thanks to this program, I now have a new trade and have documental proof of my qualifications. A few weeks after the project ended I found a job and since then I’ve been working successfully at MetInvest-Promservis. I feel satisfaction and a stable income. This kind of qualification gives you a certain foundation in life and I know that new prospects have opened up for me now,” says Ruslan Peydanovskiy, ATO veteran and participant in the “Establishing Conditions for the Professional Development of ATO Veterans in Zaporizhzhia” project.

The professional development center continues to operate. Since the project was launched, staff has gained experience in training and has generated a positive image for the initiative. Thanks to the partnership with Zaporizhzhia business associations and private businesses that they have established, the project’s coordinators have been able to share various job opportunities with graduates.

PLEDDG works to foster growing potential in the SME sector comprehensively and versatilely in order to support local economic development. In 2017, the Zaporizhzhia City Council worked with PLEDDG to develop a Program for SME Development in Zaporizhzhia for 2017-2021. Implementing the project to retrain ATO veterans is helping to achieve one of the strategic goals of the Program, which is to increase the capacity of local officials and SMEs to develop entrepreneurship. The veterans’ project is just one of a series of social initiatives supported by PLEDDG. For instance, in parallel with this program, a Business Women`s Space was developed in Zaporizhzhia as a co-working center in support of social innovations, entrepreneurship among women and start-ups. More about PLEDDG initiatives read in our upcoming success stories.