Open Governance in Yaremche: Town Council Has Switched to an Electronic Voting System 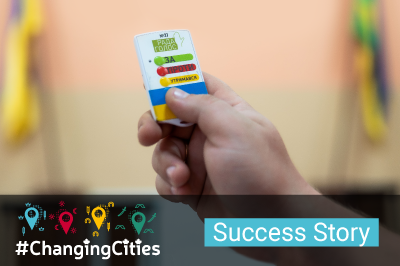 When local governments are more transparent with their decision making, it builds trust with citizens. And when citizens have trust in government, they work together to create stronger, responsive and more accountable communities.

The Partnership for Local Economic Development and Democratic Governance (PLEDDG) focuses its efforts in Ukrainian regions on improving governance and raising the public’s trust in local government bodies. Activities are aimed at facilitating a quality dialogue between local government authorities and the community, to promote openness, and to put in place high standards of democratic governance. Yaremche is one of the partner cities who are implementing more open, democratic governance.

In June 2018, Yaremche launched the project titled “Introducing Principles of Openness and Transparency as a Guarantee of Dialogue Between Government and the Public”, which was initiated by the executive committee of the City Council and implemented under the auspices of PLEDDG’s Democratic Governance and Development Initiatives Support Fund. The main achievements of this initiative include a fully refurbished hall for the Yaremche City Council and installation of the Rada Holos electronic voting system.

The project aimed to boost the trust of the local community in public servants by being more open and transparent in city council decision making. As of 2018, the Yaremche City Hall did not have an electronic voting system or electronic voting practices, which significantly slowed down the sessions and caused voting tally delays. Since the majority of decisions at the local level are passed by deputies by a show of hands, city council workers processed the voting results manually on the spot with the results published on the official website within the same day, as required by the Law of Ukraine On Access to Public Information.

“Deputies used to vote by show of hands. A special returning board was formed to count the votes. A representative of the city council would write down the results, compile a list to be signed by the council chairman, and only then this information could be uploaded to the website. Following the installation of the Rada Holos system, this process has become not only faster and more convenient but also absolutely transparent. The system allows registering the deputies in attendance. Each one of them has a console with three buttons: “in favor”, “against”, and “abstained”. A large screen has been installed in the session hall, which shows voting results and names of those who voted in a matter of seconds,” says Taras Klymyuk, Deputy Mayor of Yaremche.

Dedicated equipment was purchased for the electronic voting system: consoles, a radio frequency receiver, software, an LED screen, a projector, a laptop and other essential components. In December 2018, a representative of the vendor company conducted a detailed briefing and training for deputies on how to use the system. A brief manual was also prepared and distributed, explaining the operating principles and mechanics of the Rada Holos system.

Olha Malakhova, Сhief Specialist at the Investment Policy Department of the Executive Committee of the Yaremche City Council, recalls that in 2018 the session hall was in an extremely bad shape. Major renovations were carried out with the financial backing from PLEDDG: the floor, ceiling and walls were renovated, electrical wiring and heating were replaced. All the essential furniture was also purchased. In May 2019 the council members were ushered into a beautiful and modern session hall that was transformed beyond recognition. Comfortable working conditions were created not just for deputies and members of the executive committee but also for community representatives involved in city council proceedings. After all, the city hall in Yaremche is a multi-purpose venue andhouses scheduled sessions of the city council, meetings, expert committee hearings, and public hearings. Citizens are also received in private matters.

“Every week citizens are received in the session hall: for example, the city council chairman receives them on Mondays, his deputy – on Tuesdays, and the secretary – on Wednesdays. All city residents are welcome to attend open sessions of the city council,” Olha Malakhova adds.

One of the project objectives was to ensure live broadcasts of council sessions and expert committee hearings to give Yaremche citizens access to up-to-date information about decisions of the local council. The City Council has entered into a contract with a radio station that will air official broadcasts of city council sessions. So far they still figuring out the format and they are considering quarterly broadcasts. This issue will be discussed in detail in the immediate future so a final decision can be approved. If the city council sessions are broadcasted officially on radio, deputies can be more open with their fellow residents. In particular, voters would understand what kind of decisions deputies support and in this way report to community on air about their work.

Toward the end of 2019, the Yaremche City Council presented a new official website as a way to build more trust with community members and ensure an even greater transparency of the decision-making process. Among other things, the need for this activity was due to the findings of a study of budget transparency of the city of Yaremche undertaken in 2018 with support of PLEDDG and other donor organizations. Results showed that the way Yaremche residents were informed about the activities of local government agencies had to be improved. In particular, it was underscored that the city council website was obsolete, offered limited functionality and interactive tools, and needed updating. All critical comments have since then been implemented in the website and the information is clearly structured, user friendly, and regularly updated.

PLEDDG uses such initiatives and practical transformations based on open governance principles to actively strengthen the trust of communities in local government agencies. The project implemented in Yaremche not only created a quality environment for city council proceedings and interactions with the community but also contributes to a favorable attitude toward the local authorities in general. After all, local residents see transparent decision-making, feel more comfortable and safer in their own city, and become more open to public activism.