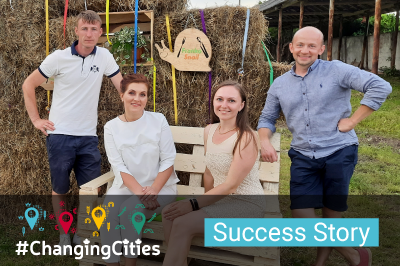 In late November 2019, two women in Ivano-Frankivsk established an exclusive company called Franko Snail. Its specialty is cooking snail dishes and it is committed to popularizing the culture of snail consumption in Ukraine. In the first two months on the market, the business served 20 kilos of snails to patrons in Ivano-Frankivsk. That’s more than 2,000 snails. Company co-founders Alla Nahirna and Victoria Kozubash were motivated to launch their business project and bring their idea to life after completing the “Success in Business” training course.

The training course for women was administered by the Ivano-Frankivsk-based Private Enterprise Development Centre’s “Business Incubator”, as one of the winners of the Association of Ukrainian Cities’ (AUC) 3rd competition for short-term gender initiatives. Funding was provided by the Partnership for Local Economic Development and Democratic Governance (PLEDDG) international technical assistance project. This initiative aims at tapping and promoting the entrepreneurial potential of women in Ivano-Frankivsk to boost their role in the local economy.

Alla Nahirna says that as she signed up for the project, she had a few business ideas up her sleeve that she hoped to act upon after acquiring some knowledge and confidence. However, over the course of her training, she re-aligned her priorities.

“I signed up for the course together with my friend Victoria. From the outset, each one of us had our own ideas about potential business development. It was during the training that we gained insights into the specifics of doing business and decided to pool our resources and cook snails. To be honest, I had this idea before but lacked the inspiration and courage to take up this business on my own. Victoria and I had a solid springboard for launching our business: for more than three years our husbands have been growing snails at their own farm. They know the market, understand its specifics, and cooperate closely. We decided to develop a new branch of the family business and that’s how we established the company Franko Snail. We are currently picking up the pace in the Ivano-Frankivsk region and will subsequently expand the geographic reach of our business,” says Alla Nahirna, co-founder of Franko Snail.

The ladies currently cook snails at home and offer snails for sale served with sauces prepared with tomatoes, nuts, parsley, horseradish, and beets, as well as soy sauce and sesame seeds. They also sell snail fillet, smoked, and pickled snails. For the time being, Franko Snail sells most of its products to customers in Ivano-Frankivsk and Kolomyia, as the snail farms are located close by. Renovations are in the homestretch on a property in the village of Pidhaichyky, and a full-fledged production shop will be set up there before long.

“The successes of our company during the first few months on the market exceeded our expectations. We need to put in place an effective distribution system to keep up the growth curve we embarked on from the outset. We have recently started setting up free sample stations at grocery stores. In just two months, we managed to display our products at four stores in Ivano-Frankivsk and two stores in Kolomyia. We will shortly finalize a full-scale business plan for Franko Snail and will follow it in the future,” Alla Nahirna adds.

The second stage of the “Success in Business” course took place in January – February 2020 when instructors offered individual and group consultations focusing on topics of interest to the women who joined. According to the founders of Franko Snail, the second stage proved even more interesting. Once they had their own business in place, they came up with specific practical questions and they had the opportunity to receive truly effective tips from business practitioners. The participants observed that the course formed an effective discussion group: some women were just launching their business careers, while others had been successful entrepreneurs for years. This provided an excellent platform for exchanging real-world experience and inspiration for growth.

“Close to 20 instructors are involved in the project. Practical teaching experience was a mandatory requirement for them. During the first two months of the project, we evaluated the entrepreneurial potential among women, identified their needs, and polished the training program. Personally, I wasn’t quite sure at the beginning that this initiative would prove so popular in the city. It turned out to be quite the opposite: within a week of the enrollment announcement, we received over 100 participant applications, and eventually 47 women were short-listed for this opportunity to learn the basics of doing business. Two groups attended three classes a week for two months. The trainees attended classes very diligently, which came as a pleasant surprise,” says Uliana Berezhnytska, Chair of the Applied Economics Department at Ivano-Frankivsk National Technical University of Oil and Gas, and Coordinator of the Private Enterprise Development Centre’s Business Incubator.

The training program of the course was provisionally divided into six blocks, during which the participants studied the basics of doing business, analyzed the market and searched for potential customers, learned financial planning and capital management, explored the legal aspects of starting their own business, and mastered the fundamentals of accounting. According to the organizers, the highlight was the “Psychology of an Entrepreneur” course that received a wealth of positive feedback and surpassed all expectations of the participants.

“We want to hold the business course for women on a regular basis in the future. We are now reviewing and adjusting the training program, based specifically on feedback from participants regarding each training block, and will move forward,” Uliana Berezhnytska adds.

Meanwhile, the co-founders of Franko Snails are setting ambitious goals. They want customers to walk into a grocery store with the question: “Do you sell snails?” They will consider it a good sign if residents of Ivano-Frankivsk begin doing so. The women plan to open a small restaurant next year, where they will serve snail dishes exclusively, with good wine. This summer the Franko Snail team entered a new growth trajectory by opening a gastronomic tour season at their Pidhaichyky farm.

“Since mid-July, we have been hosting visitors at our farm almost daily, weather permitting. They will experience a special ambiance on weekends: we invite musicians, and our partners hold a wine tasting event. The gastronomic tour price covers a tasting menu, a tour of the grounds, a stroll through a snail field, navigating through a corn labyrinth, and plenty of interesting photo-ops. Active recreation enthusiasts can additionally pay for an exciting quest and win a set of Franko Snail products,” Alla Nahirna says.

The “Success in Business” course aims to instill in the women an understanding that their entrepreneurial activity contributes to the development of the local, regional, and national economy. For example, a new study by Boston Consulting Group shows that global GDP could have risen by 3-6% if women and men engaged in business on an equal footing. Of course, many trainees enroll in the course, and each one of them is at her own level of readiness to launch a business of her own. However, the fundamental theoretical and practical knowledge acquired gives them confidence to move forward. According to the course organizers, women show a great deal of interest in communication, regularly invite each other to thematic events, jointly organize and attend business events, and initiate meetings, all of which is proof of an atmosphere of mutual interest and support within study groups.

Ukraine currently lacks a gender balance in many sectors, business included. Unlike men, Ukrainian women often have limited access to economic opportunities for a variety of reasons. PLEDDG actively promotes the incorporation of gender equality principles in Ukraine, particularly by supporting regional gender initiatives. Over the past two years, more than 20 projects aimed at greater involvement of women in the political and economic life of communities have been implemented.