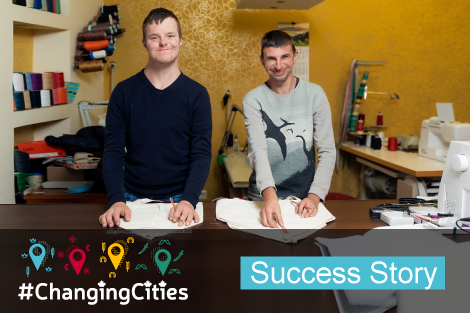 Three women — mothers of children with disabilities — established the “Same Chas” [The Time Is Now] NGO in Kolomyia in March 2017. It helps young people with disabilities to socialize and pursue self-fulfillment, to protect their rights and interests, and to reach out to Ukrainians to raise awareness about the importance and advantages of an inclusive environment and equality in social life. In 2019, the team decided to start a Kolomyia-based social inclusion enterprise that would employ young people with disabilities, and this is how the eco bag workshop came to be. The idea began to materialize in March 2020 under the auspices of PLEDDG and Kolomyia City Hall.

“Kolomyia has a rehabilitation center that had been previously open to children with disabilities no older than 18. The “Same Chas” NGO assisted the center with opening a youth group for those already past this age limit. While observing clients at the center, we spotted young people among them who looked to join the workforce instead of merely attending interest groups. The idea to create the workshop crystallized out of these observations. We initially considered making pottery goods only to realize that in this case we would be able to create very few jobs. After exploring various options, we finally decided on eco bags. People with both physical and mental disabilities can be hired to make them. Our choice was further reinforced by the fact that care for the environment has become extremely relevant nowadays,” says Iryna Yurakh, Project Leader, Eco Bag Workshop: Professional Development and Social Integration Opportunities for People with Disabilities, co-founder of the “Same Chas” NGO.

The process of creating the social inclusion enterprise required adapting the workshop premises to the needs of people with disabilities and installing essential equipment. Kolomyia City Hall made its own contribution by installing the workshop pavilion on the premises of the Ukrainian Red Cross Society in Kolomyia. However, the quarantine imposed in response to the COVID-19 pandemic necessitated major adjustments to the project timeline: contingency funds from the city budget were redirected towards fighting the disease and as a result, the workshop space was completed only in November 2020.

The workshop will hire up to 15 people with disabilities aged 18 to 35. Applicants have already been shortlisted based on their interest in employment and their physical capabilities. A cutting and sewing expert delivered several days of training for the young people focusing on the specifics of the process of eco bag production and finishing. Workshop leader Iryna Yurakh also completed the training course in order to learn the modern techniques and secrets of eco bag production and subsequently ensure a high-quality manufacturing process.

“Alongside young people with disabilities, we will get volunteers and schoolchildren involved in workshop operations. For the time being, we plan to assign a single volunteer to every worker: as a friend and personal assistant. We will probably revise the number of those present as work begins as the workshop space is not that large, and we need to keep everyone comfortable. It’s crucial that our volunteers have prior experience working and communicating with people with disabilities. In 2018, we held a six-month Social Volunteer School, so now we have wonderful alumni who eagerly volunteered to help our social inclusion enterprise and have already completed an introductory training course in cutting and sewing,” Iryna Yurakh says.

Workflows in the workshop are organized in 5 zones: 2 computerized sewing machines, an overlock, an ultrasonic machine, and a cutting bench. As a result, five people with disabilities can be involved in the production process at any one time. Bags will be made from democratic flax linen fabric and spunbound: the materials have already been purchased from Ukrainian vendors. As a key competitive edge, the bags can be imprinted with images, so the team plans to buy a direct-to-fabric printer for the workshop.

The eco bags will be sold through stores and supermarkets in Kolomyia, at fairs arranged at tourist destinations, as well as online. In an attempt to find markets for their products, the project initiators are on the lookout for partners and have already made an arrangement with the Association of Hoteliers and Homestead Owners of Yaremche Region to produce branded eco bags for them.

“Product sales revenue will go toward paying salaries, restocking on fabrics, and growing the manufacturing infrastructure. Our number-one priority is to create self-fulfillment opportunities for young people with disabilities. Their employment will not be limited to creativity and self-development. These will be salaried jobs. This income will both encourage them and instill in them a sense of responsibility for the result. We will make every effort to keep workshop personnel working with us for as long as possible, getting satisfaction out of it, and keeping up their enthusiasm,” Iryna Yurakh adds.