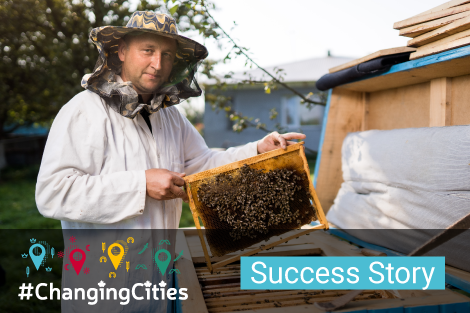 For over 10 years now, the Dolyna United Territorial community has been promoting the development of beekeeping and assisting business-minded apiarists with product promotion in the domestic market. Some 250 residents keep beehives at their homes. Recently some exciting new opportunities have opened up for Dolyna-based beekeepers: a chance to market their apiary products internationally. Looking to create an environment conducive to exports, the local authorities teamed up with the Dolyna Charitable Foundation to launch a project titled Preparing Dolyna Business Owners for the Production of Competitive and Exportable Beekeeping Products. Project implementation throughout 2019 became possible with the support of the Partnership for Local Economic Development and Democratic Governance (PLEDDG) project, funded by the Government of Canada.

Expansion to international markets is a lengthy, multi-phased process that calls for multifaceted technical preparations with the enthusiasm of business owners. An essential stepping stone for beekeepers involved raising awareness about their own business to make sure that products intended for export met the highest global quality standards. The project delivered several trainings and conducted research of international markets. Most importantly, the team set up a production center where bee queens are inseminated and a lab to test the quality of the raw products.

“Since 2010, Dolyna has been hosting twice-yearly fairs (in August and October) where agricultural producers come to sell their goods. It became apparent a long time ago that beekeepers needed assistance with competent product promotion and that they lacked a marketing strategy beyond selling honey in ordinary glass jars with polyethylene lids. Grant funding made it possible to open a local factory with automatic packaging and bottling lines for honey and berry products and to subsequently market them internationally. We are now busy fitting it out,” says Lesya Tysiak-Mural, Project Manager, Director of the Dolyna Charitable Foundation.

As part of the project, the Ivano-Frankivsk Chamber of Commerce and Industry prepared marketing studies of Canadian and Polish markets for beekeeping products for Dolyna-based business owners. In 2019, 23 local apiarists went abroad for a training on doing business. The entrepreneurs learned about certification of export products, customs regulations, and the proper way to fill out declarations. Participants have lauded the training as a source of clear and understandable guidelines for foreign trade.

“Even though beekeeping is my hobby and I own only 12 beehives, I attended all trainings as part of the project. You could tell that the training program was prepared in a systemic and consistent manner; there was a clear connection among all activities and everything had a practical application. Almost all of the information was new to me. The foreign trade training devoted a fair amount of attention to documents. They made it perfectly clear that we must choose a form of business suitable for a particular situation in expanding to international markets. That’s why we began forming cooperatives. Colleagues elected me as chairman of one of them. To continue the subject of training, I was very impressed with the training on instrumental insemination of bees. The topic of artificial insemination is unusual and obscure for us, but I realize that this is the future, so we need to learn and try,” says Bohdan Prokopyshyn, project participant, history teacher at the Dolyna Comprehensive School of the Dolyna District Council.

“My husband and I have been keeping bees for 10 years and now we have close to 150 bee colonies. I was glad for the chance to learn about instrumental bee insemination not just in theory but also in practice at the newly created lab. This approach allows cultivating, so to speak, pure-bred bees. A beekeeper can be certain about the genealogy of bees. After all, in the natural environment a queen bee can be inseminated by an unhealthy drone, rendering all of its offspring not viable. When a queen is inseminated instrumentally, it becomes more productive, yields more honey, and can work for more years compared to a queen bee inseminated naturally. Moreover, instrumental insemination in a lab setting is consistent with international standards for products of beekeeping,” says beekeeper Ivanna Dmytriv.

As part of another training, 39 apiarists learned how to correctly collect and dry bee pollen, which is critical to the quality of the end product. The resources of the newly created lab were used to test several varieties of bee pollen from the local market. Test results showed that products contained too much moisture, which is strictly prohibited and may even harm consumers. The training encouraged beekeepers to revisit their production techniques and to ensure they only make safe, quality products.

“A big impact of the entire project is that apiarists realized that they could unite and collectively achieve much more in their industry than they would when acting alone. Only joint efforts give them the capability and resources to expand to foreign markets,” Lesya Tysiak-Mural adds.

To unite the business owners, the Association of Agricultural Producers was formed in Dolyna in December 2019. The association members volunteered specimens of beekeeping products for laboratory testing. They have used the results to implement changes and rectify production shortcomings. Once the packaging line is launched, laboratory-tested and certified products of beekeepers will be exported under a single trademark. Some of the local apiarists are thoroughly preparing for the launch of export batches. For example, Ruslana Petriuk, a business owner based in the village of Kozakivka, Ivano-Frankivsk Region, is enthusiastically ramping up the capacity of her apiary while at the same time actively helping to fit out the future factory shop.

“In my family, beekeeping has been passing from one generation to the next: my grandparents, parents, and later my brother went into this business. I’ve been taking care of the apiary for almost 10 years now and my children are also helping out. I have close to 150 beehives now. While I previously collected up to 2 tonnes of honey per season, I knew beforehand who I could sell it to: friends and acquaintances whom I catered to for years. I have now increased the number of bee colonies and there will be more honey, so I’m also counting on the chance to export it. I’m very glad that there is now a laboratory nearby where I can test my products. My honey is an ecologically clean product and has successfully passed all tests. I believe this is due to the fact that our region has no fields that are chemically fertilized. There are forests all around us with lots of herbs: raspberry, blackberry, blueberry, and willow weed. Project managers took three varieties of my Carpathian honey to the WorldFood Ukraine 2019 expo. They said that people lined up for them. Business people from the UAE, Japan, and China were willing to sign contracts for honey deliveries right away. Once the certification process is over, we will work on establishing business ties. This project is an incredible step toward the development of beekeeping in the region. I don’t think they have such comprehensive and fundamental support of small and medium enterprises anywhere else in Ukraine. I know that major plans can be brought to life only through a collective effort, and this gives me the enthusiasm to grow and push my business forward,” says Ruslana Petriuk.

With PLEDDG support, partner regions are creating and expanding the business infrastructure and bringing about qualitative changes in the business climate, with small and medium businesses receiving support and gaining faith that their efforts can be rewarded. Every initiative sets an example for other cities and industries that strategic planning, joint efforts, and phased progress can make great ideas come true.