To classical music and among a wide community of friends and partners… This is how Ivano-Frankivsk’s 4th International Investment and Economic Forum “Partnership and Prospects” opened. It was attended by about three hundred of participants from both Ukraine and neighboring countries, such as Poland, Lithuania, and Romania, where they were sharing their experiences while doing networking and summing up the the year’s best practices. 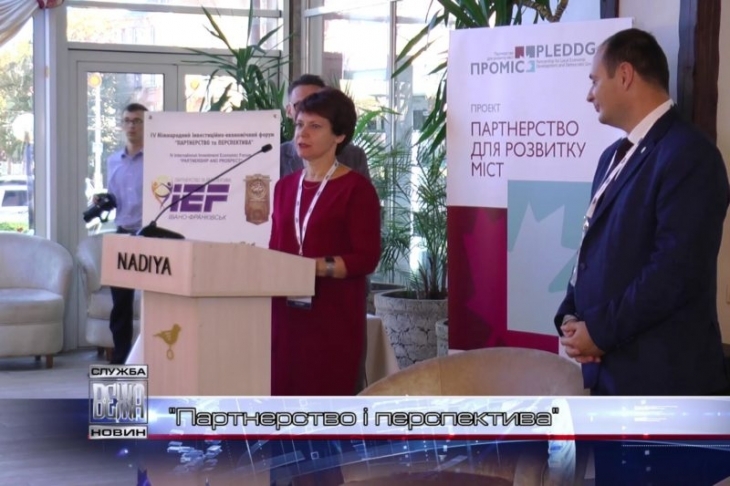 According to the investment level per capita, the Carpathian region ranks number 5 in Ukraine. As the news item of the “Vezha” television and radio broadcasting company informs, an independent “Credit-Rating” Agency commemorated this with a certificate for the highest level of investment attractiveness.

Not only in a radius of hundred kilometers, the partnership with Ivano-Frankivsk is being developed, but so does the surrounding community. Specifically, the former Kniazhyi Halych is building it.  During the Forum, the Mayors signed the Memorandum of Cooperation on Development of Tourism Attractiveness of Regions.

Over the last year, Ivano-Frankivsk became a winner of two EU grants. It was so for the projects elaborated directly in the framework of the investment forum. Particularly, it referred to the provision of the Central City Clinical Hospital with medical equipment.

The International Investment and Economic Forum is also an opportunity for the local entrepreneurs to show the results of their painstaking work. Owing to their endeavors, over the last three years, Ivano-Frankivsk’s export has been considerably exceeding the import indices, whereas, the number of enterprises operating in the city has been constantly increasing.

Alternate sources of energy have become one of the “novelties” of the contemporary market. As entrepreneurs note, demand for them is ever more increasing. Moreover, the local authorities place a premium on energy saving too.  Foreign investors are also ready to cooperate with Ivano-Frankivsk business environment in this area. In European countries, “energy efficient” solutions do exist. Therefore, they are currently ready to share their experiences with Ukraine.

The Fourth Investment and Economic Forum has become a special event for Ivano-Frankivsk. This time, the regional center of Carpathian regional gained recognition of the European Council and was honored with a reputable Prize as the highest award for promotion of European values.  Last year, this award was given to Lublin, Poland, and now the partner cities have had an opportunity to celebrate the prize all together.