On September 25, at an official ceremony diplomas were awarded to the first 20 ATO veterans who successfully completed the training course held in the framework of the project “Creating Conditions for Occupational Retraining of ATO Veterans in Zaporizhia”. 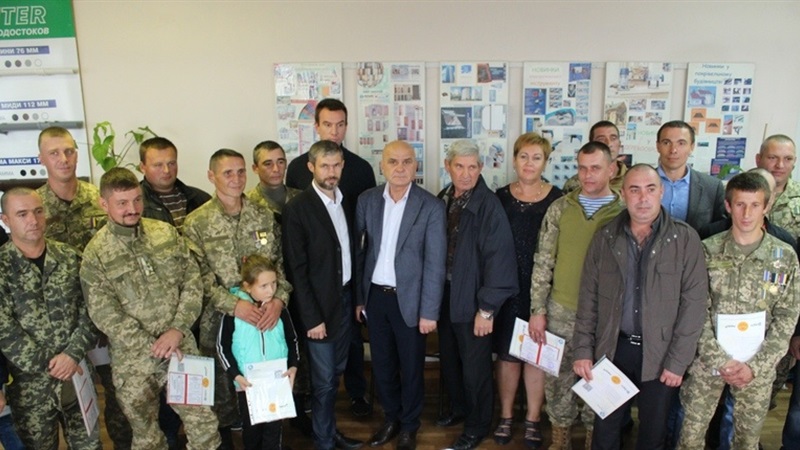 The project “Creating Conditions for Occupational Retraining of ATO Veterans in Zaporizhia” was launched at the initiative of “The Association of Zaporizhia ATO Veterans” NGO and was supported by local authorities and PLEDDG Project. Its objective is to facilitate integration of ATO veterans into the social life, their employment, and improvement of interaction and coordination between local public bodies and community members, non-governmental organizations, small and medium-sized enterprises specializing in these issues and to create a uniform concept that will become an auxiliary tool in this area of activity both in Zaporizhia and in other cities.

As Volodymyr Zhukov, Director of Department of Public Services Provision and Entrepreneurship Development of Zaporizhia City Council, said, the project on occupation retraining for ATO veterans became a winner of the call for grants held in the framework of the SME Development Support Fund as part of PLEDDG Project.

Nowadays, the social initiative has been successfully implemented, with specific deliverables achieved. The successful trainees include 20 ATO veterans who have completed the retraining course and obtained certificates. I hope the knowledge they have acquired during the training will prove useful in their subsequent professional activity, – Volodymyr Zhukov said.

The project provides for two stages. The duration of either period is 3 months, in the course of which 40 persons, former ATO participants, (with 20 per either stage) are to complete the training and obtain the qualification of gas-electric welders. The training is held in the premises of SE “Zaporizhia Training Center”. The first trainees have already completed the course and obtained certificates. There have been 20 participants enrolled already. The training for the second group will end in the middle of December.