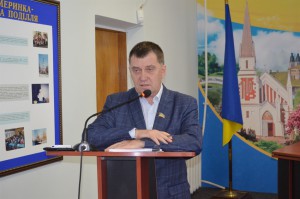 Zhmerynka has ranked in the top 5 of the best Ukrainian cities by investor appeal criterion. The rating was made public by the Fund “The Regional Center for Economic Research and Support for Business”.

Such a result was achieved due to openness and transparency of the actions carried out by the Zhmerynka City Council’s Executive Committee as well as due to continuous participation of the town in various partnership programs. No doubt, behind such rating result is a routine and methodical work done by the people who are in charge of deciding on development priorities, drawing up strategic plans and maps for investors, making databases public, welcoming the community to take part in this process.

The vast majority of these areas of activity falls on the shoulders of the city council’s economic department, which team currently includes 7 experts chaired by the Head Anatolii Konoval.

According to the Head of the Department for Economic Management, City Council Deputy Anatolii Romanovych, this credit is not only due to their department but also due to all departments and units chaired by Deputy Mayor, City Council Secretary Yurii Svitlak and the deputy corps.

“Both public members and authorities were involved in elaborating the priority areas for the town’s development until 2030 as well as in planning actions for the upcoming three years. Through this process, it became possible to successfully implement one of the large-scale EU projects “Energy Go” in Zhmerynka, with financial component of 700 thous. Euro. This enabled us to insulate and re-equip schools and kindergartens. Currently, PLEDDG Project, aimed at promoting environmental problem solving through participation therein, is being implemented. At the same time, the department submits proposals to various calls for initiatives both at the regional and national levels. Therefore, we managed to renovate the pool through raising co-funding from the State Fund for Regional Development”.

The rating was determined based on the following indicators: 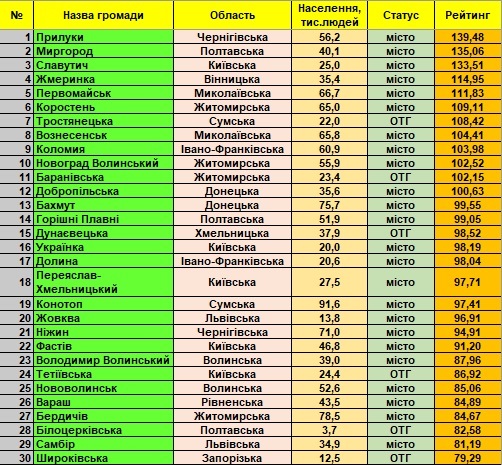 The data about activity of 1092 communities from all Ukrainian regions (since 2018, it has been used by international organizations providing financial and technical aid to Ukraine, regional public bodies, regional information resources, and private investors) were taken into account during the ranking process.

The researchers made public the information about the best 200 Ukrainian small and medium communities (with population size up to 100 thous. citizens) as of 1 July 2019, according to “The National Rating of Institutional Capacity and Sustainable Development of Communities”.