New Ideas Form a Successful City: The Results of Marketing Strategy Development Were Presented in Poltava 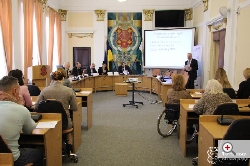 According to Ihor Lepyoshkin, Senior Expert/Program Lead, PLEDDG Project, the document, which represents Poltava marketing strategy is the result of a year of quite powerful work.

“We, the representatives of PLEDDG Project, have provided a methodological support for this work, and what is laid in the content is the result of discussions at numerous meetings, which include both interesting initiatives, and comments, which were taken into account, as well as shortcomings. This is a draft document, so we are open to all suggestions or recommendations. The marketing strategy is actually just the first step on the way of implementing Poltava branding. We have identified several target groups at which the main marketing activity will be directed. We have formed the brand’s meaning not only as a specific visualization, but also as a symbol that carries an important meaning for people and meets their expectations. In the future, we might determine what steps should be taken to implement the presented strategy, because Poltava, especially from the tourist point of view, is an undervalued pearl of Ukraine,” Ihor Lepyoshkin stressed.

Igor Lepyoshkin also noted that an important component of the strategy was the positioning of the city, so PLEDDG Project will finance the development of Poltava logo.

According to the results of research, which covers the local community, Ukrainians and foreigners, experts have determined that the city has a defined-neutral image of the tourist destination, which needs to be changed for the better. The following main target groups, for the promotion of the city as a marketing product, have been defined:

In particular, the consultant focused on the main features of the city’s identity, including: historical events and famous people; cultural heritage, literature and spirituality; architecture of the city center, Krugla Plosha (round square), Bila Altanka (white gazebo); green, ecofriendly city; cozy city with a quiet rhythm of life; local cuisine and gastronomy.

In the future, the draft marketing strategy should be adopted at the local level and work will be directed towards its implementation.