On May 18, Europe Day, a presentation of Vinnytsia new brand “A City of Ideas” was held in “Meaningful City” hub. Andriy Fedoriv and his team came to the city on Europe Day to show and explain people why Vinnytsia’s brand was going to be precisely that one.

The presentation started 20 minutes later than planned: Andriy Fedoriv apologized for being late, as he had had an interview with Mayor Serhii Morhunov which turned out to be longer. At the same time, the people, who had gathered in the hub and even had time to see the visual representation of the brand, seemed unembittered. 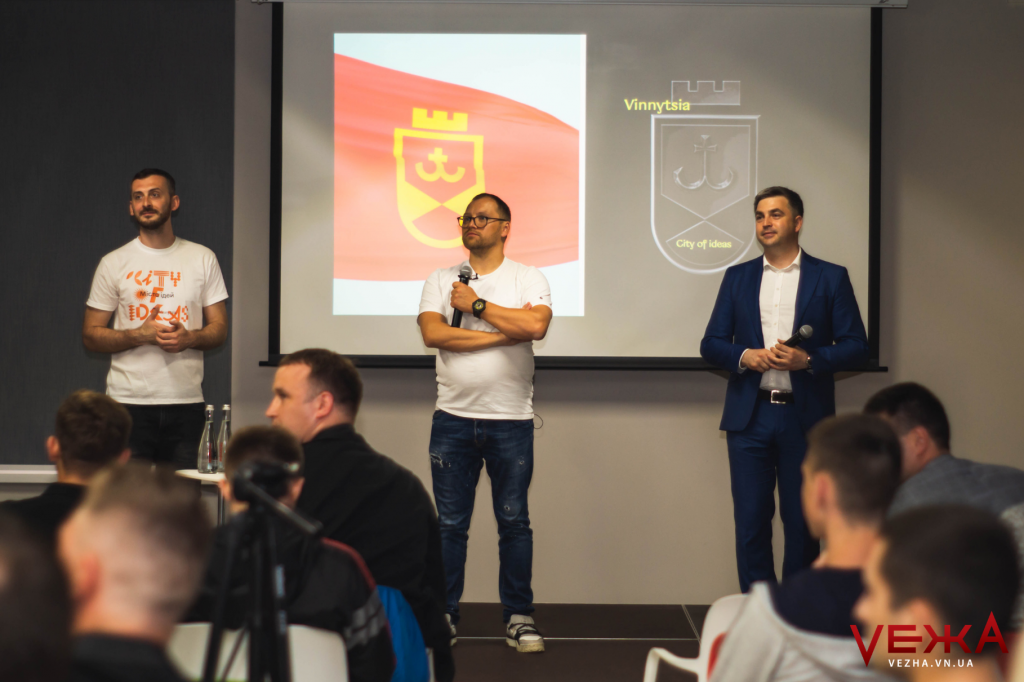 The attendees were both Vinnytsia residents and city council deputies, including Director of Economics and Investment Department of Vinnytsia City Council Vitaliy Pogosyan. He was responsible for development of the marketing strategy and brand, on behalf of the city council. Whereas, on behalf of Fedoriv company, the team working on development of the brand was supervised by Oleksandr Shumilo. 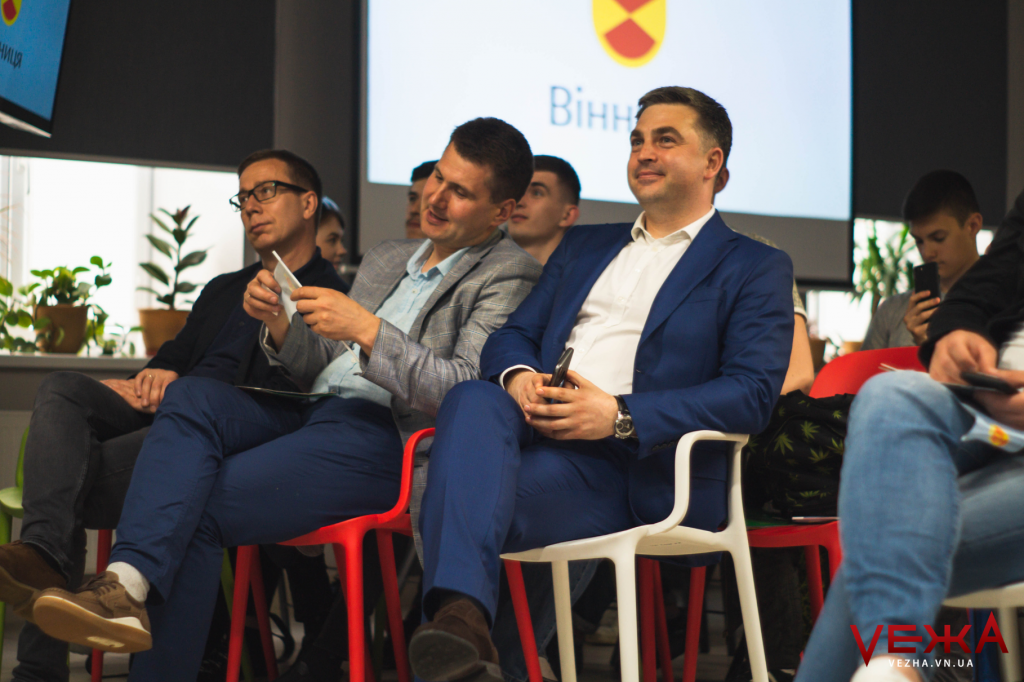 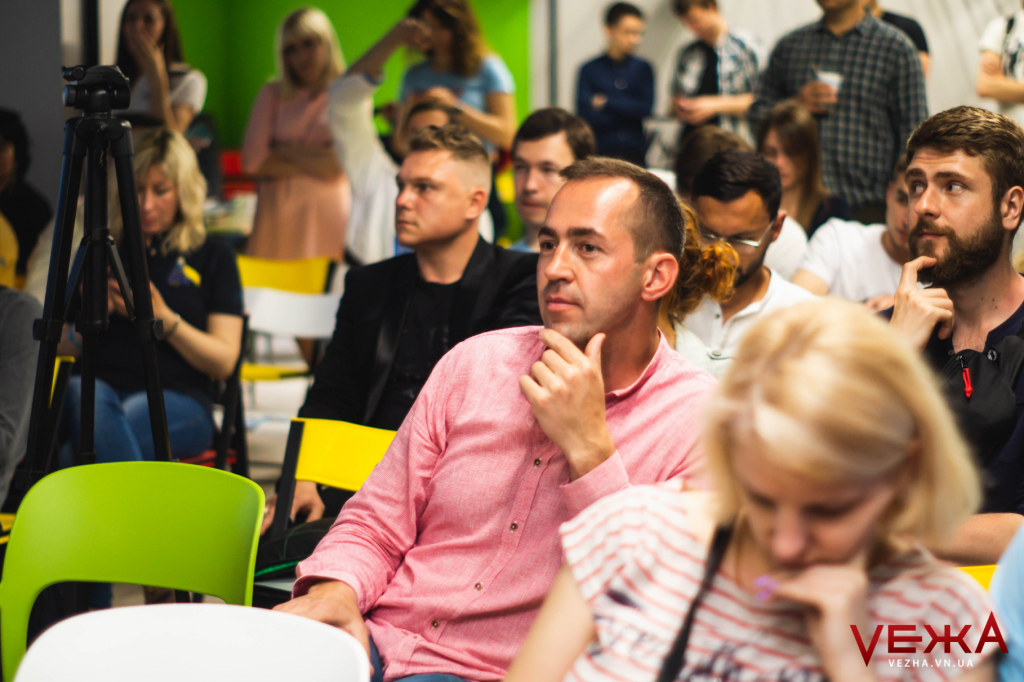 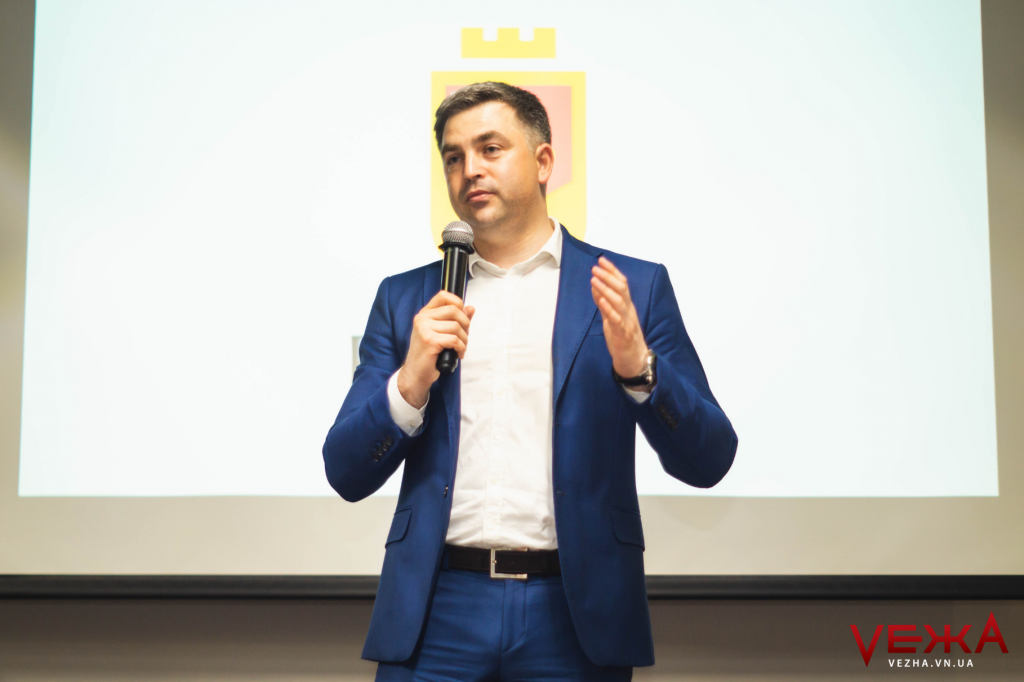 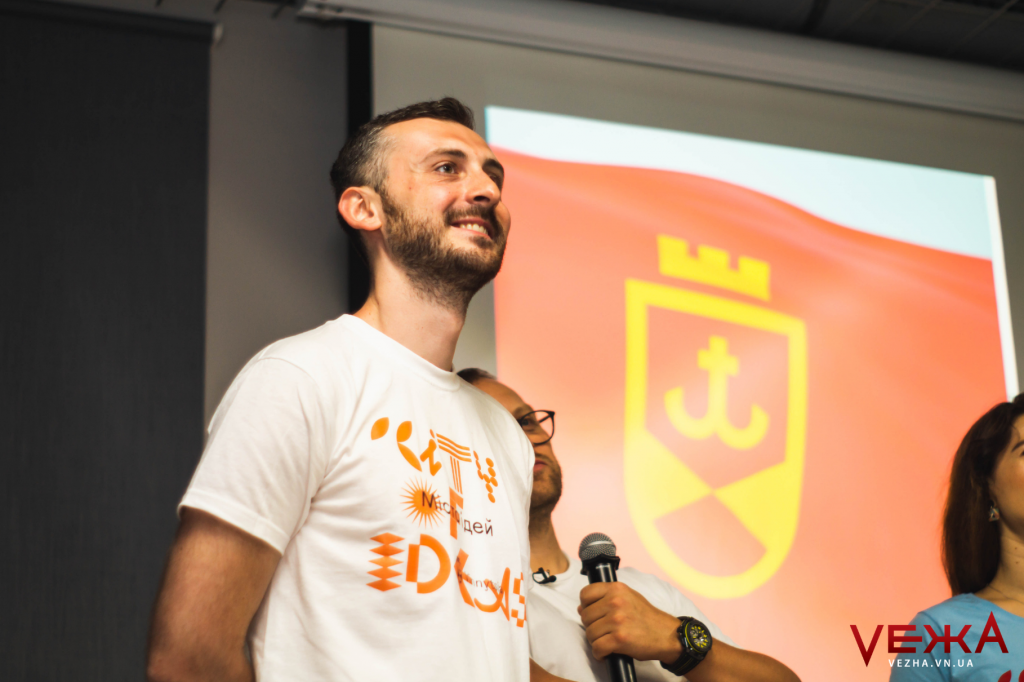 The first words Andriy Fedoriv said were that Vinnytsia, in his view, had had its brand for hundreds of years. “It dates back to the time when the city came into existence”. The brand you are going to see now was neither created nor developed, it stems from the natural evolution process. We have taken part in it to some extent only for this brand to make the next evolutionary step”, – Andriy said. He also honoured the participation of responsible officials from Vinnytsia City Council as well as PLEDDG Project which fully funded the brand design process, with no any municipal budget resources spent.

Fedoriv noted that the matter was not about a brand for tourists but about the one for every resident, tourist, and investor. “We hope that this brand will penetrate everywhere”, – Director of Fedoriv agency said, meaning the use of the logo and overall brand identity both in promo videos and just outdoors in everyday life: on souvenirs, clothes, signs over shops and coffeehouses, etc. 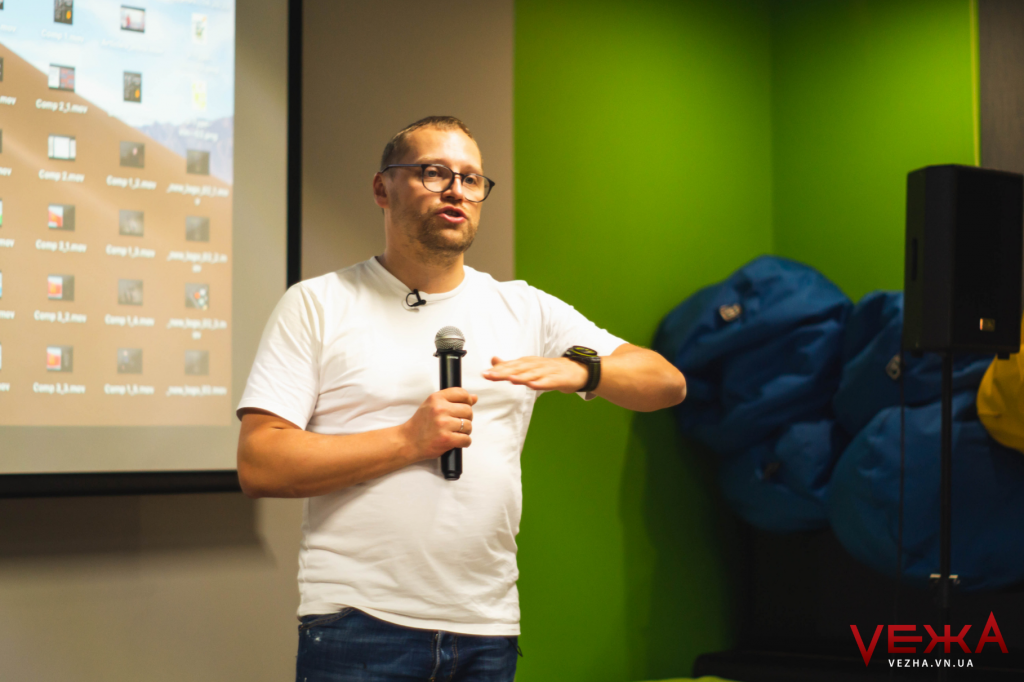 Explaining how new city brand identity was found, Andriy Fedoriv said that comfort was the first thing they noticed in Vinnytsia. “Yes, indeed, it is a very comfortable city, in general and in details. But comfort is weak motivation. Because, if everything you can offer to the world is limited to comfort only, you take a passive role. It attracts no life. Comfort and stability may imply stagnation”, – the marketing expert thinks, yet mentions that “comfort is a very good condition for thinking and inventing”.

“Brand is emotion. Emotion does not spring out of nowhere, it comes out of art. Brand is an audiovisual story”.

That is why we chose the motto “A City of Ideas” for Vinnytsia, having invented even a new word to characterize specifically Vinnytsia’s phenomena, which is “Vinnovations”. We showed how the brand looked in audiovisual forms on the first promo video with new identity.

Interestingly that contrary to the video’s summerish tone, we chose the traditionally “winterish” melody of Leontovych’s “Shchedryk”. Fedoriv explained that “Shchedryk” had always been the best known melody in the world which was “Made in Vinnytsia”, anyway, – so why not to use the opportunity.

– Considering this, we decided not to buy music for this video from somewhere in music databanks but asked a Ukrainian composer to make a musical adaptation of “Shchedryk”. At first, we were offered a “downloadable” dubstep version. But then, when we saw what a bright city Vinnytsia is, light and stress-free, we decided that jazz would be ideal for this. I am delighted with this music, and so am I with a visual solution, – Fedoriv explains.

Besides, the audience were shown how the new brand would already look in a coffeehouse window, on coffee cups, on bags, and billboards. 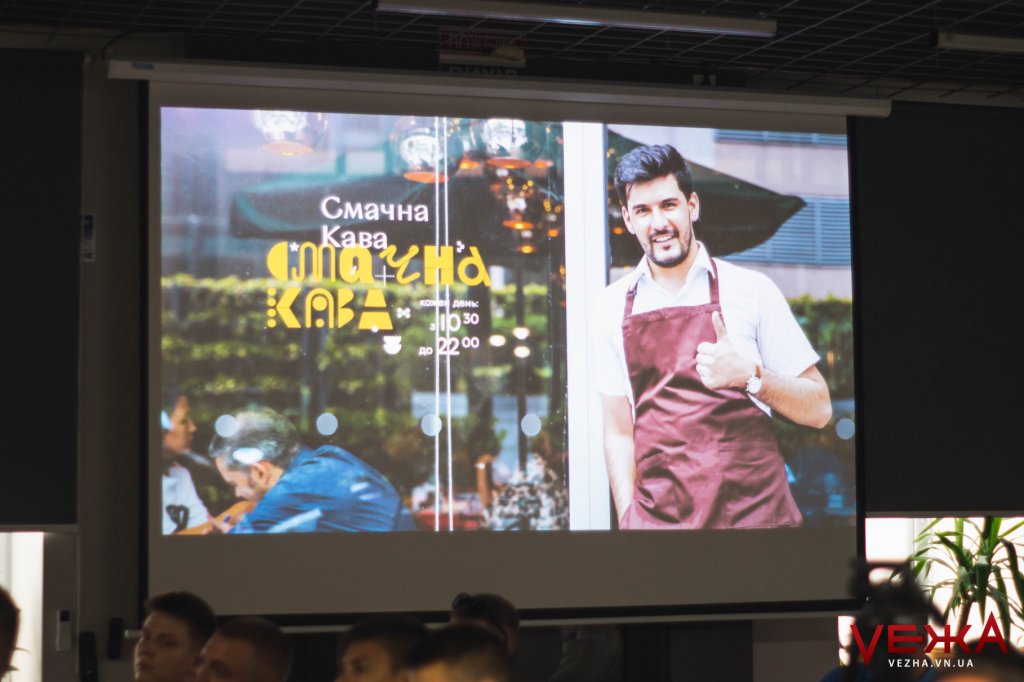 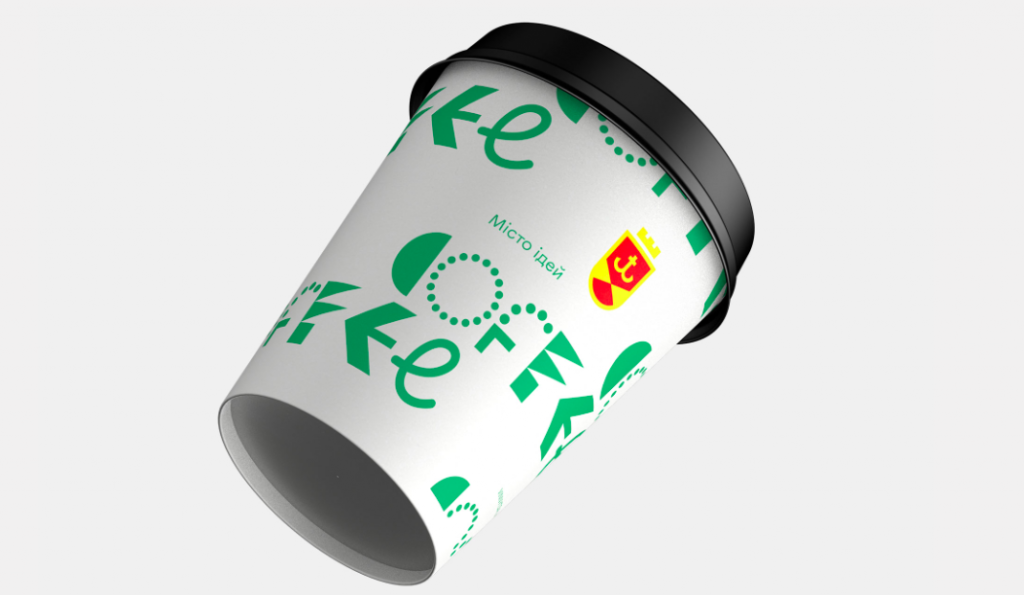 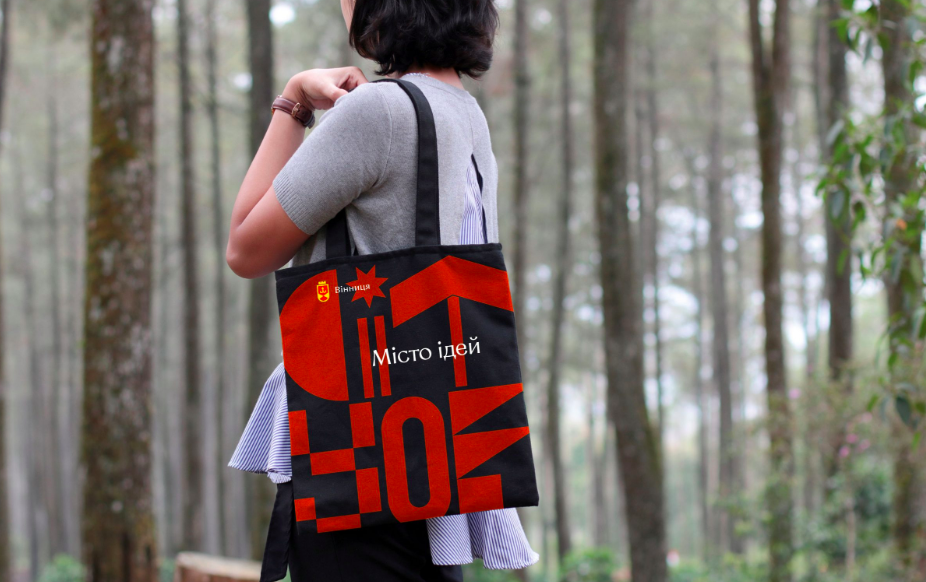 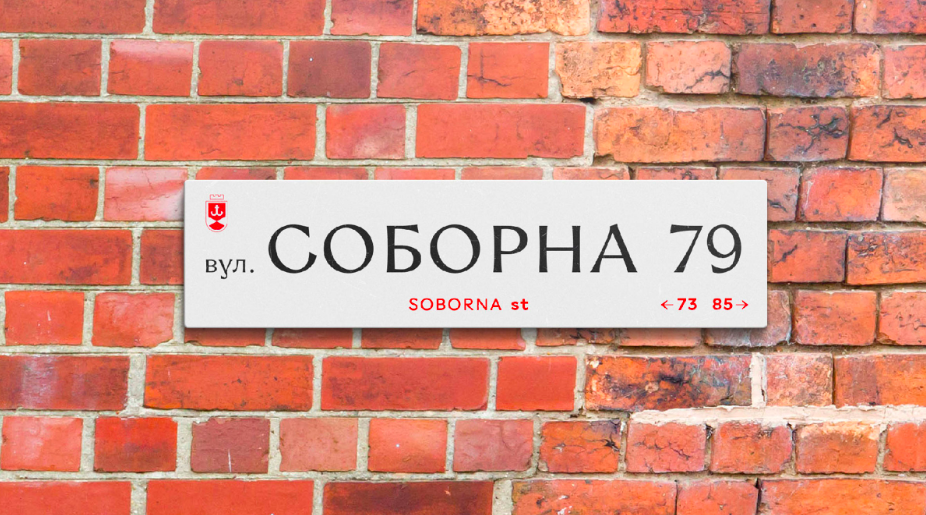 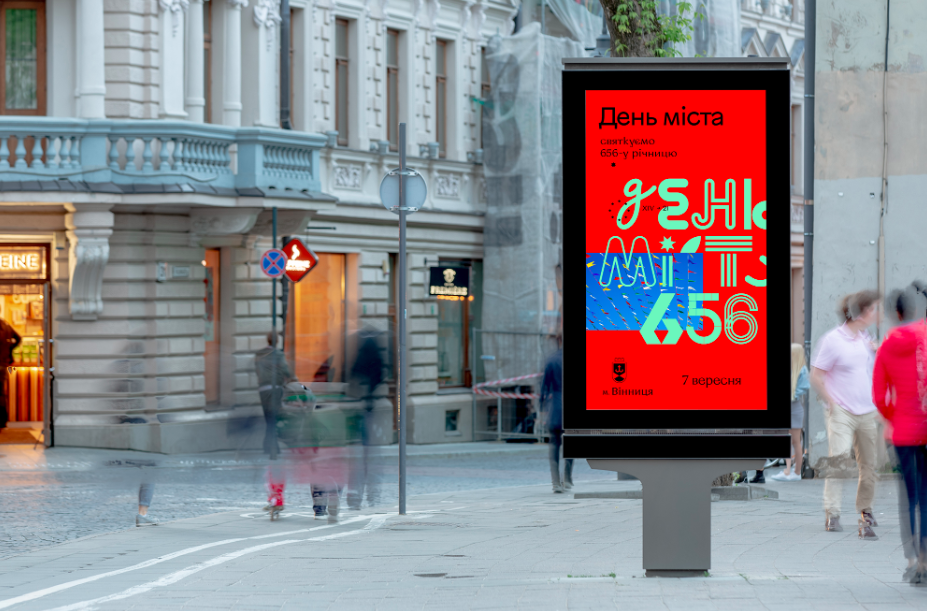 An unusual colour-scheme, yellow and light-red, coral like, was number one question asked by the attendees. As explained by the authors of the idea, they had invented nothing new in this sense but used the colours already existing in the municipal identity, in particular, those in the emblem. Besides, as Fedoriv says, the brand’s logo can be used in any colour combination: one can see how it looks on flags and stickers handed out to the attendees. 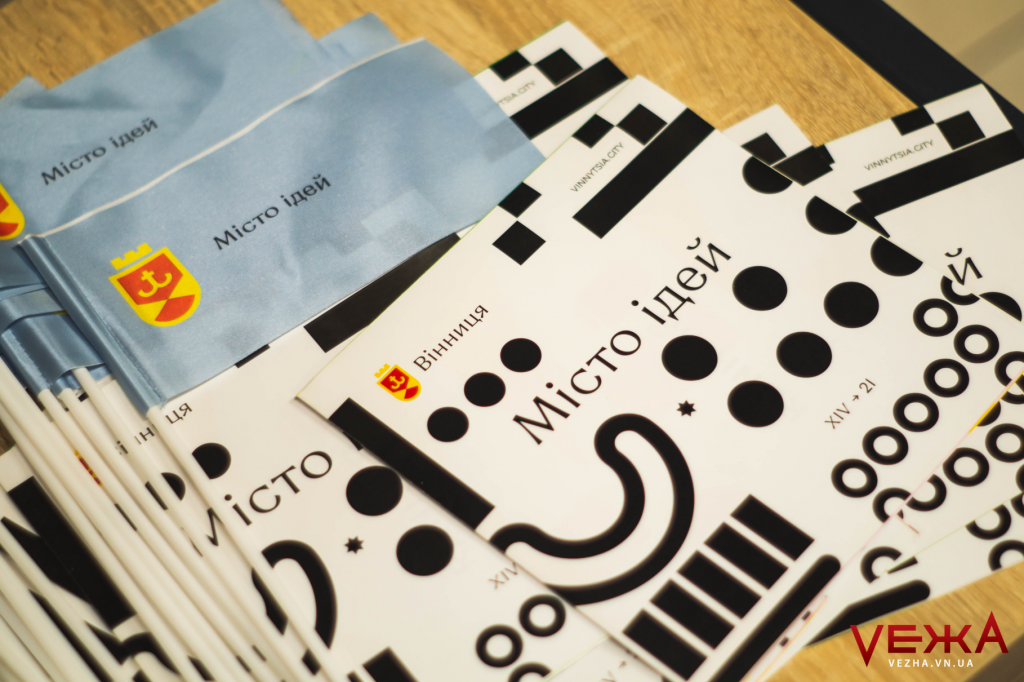 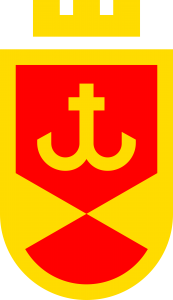 As for the logo itself, both the attendees and social media users mentioned quite different versions in their comments: from sandglass and bowtie up to “mustached cross”. Some of them disliked that the new logo lost the municipal emblem signs and became to look more like an anchor.

Fedoriv said he had got used to negative perception of new ideas as soon as they came into existence.

– Now, every project we create has always a certain degree of negative feedback at first. I do not remember a project which everyone would like at once. It is illusion. Sometimes it hurts, as you have worked over this so hard… But as for this project, it is not shelved, it is not a hundred per cent turn-key solution. There are pure data which will remain unchanged, but “what senses will they bring?” is an open question. The world is flexible, and so this brand is, – Director of the agency explains. 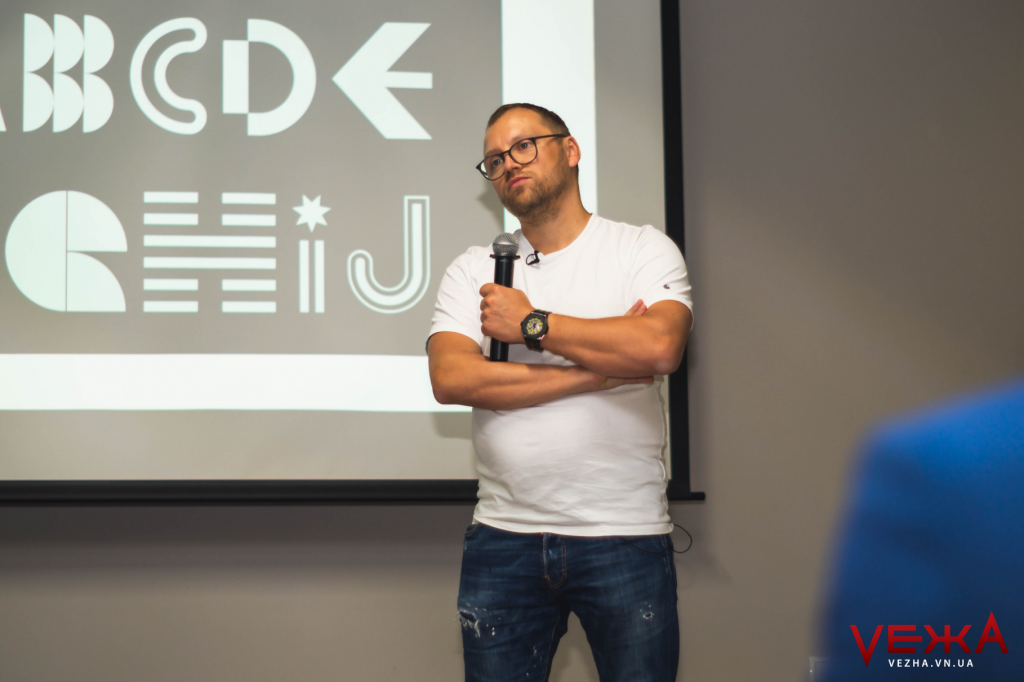 When attending the event, Director of Institute of Urban Development Alina Diachenko asked Fedoriv whether their agency fellows were ready to “fend off” the attacks made on the new brand, since the city community was not involved in the new city’s identity design process. He answered that a great many discussions had been held, in fact, but they showed up no results. That is why we have to do with “a rule of creation” in this case.

By the way, Vezha’s readers paid attention to the motto “Vinnytsia is a City of Ideas”, pointing at that a similar slogan had been already used for Slavutych. Andriy Fedoriv answered to our journalist that he believed there was nothing wrong with that. 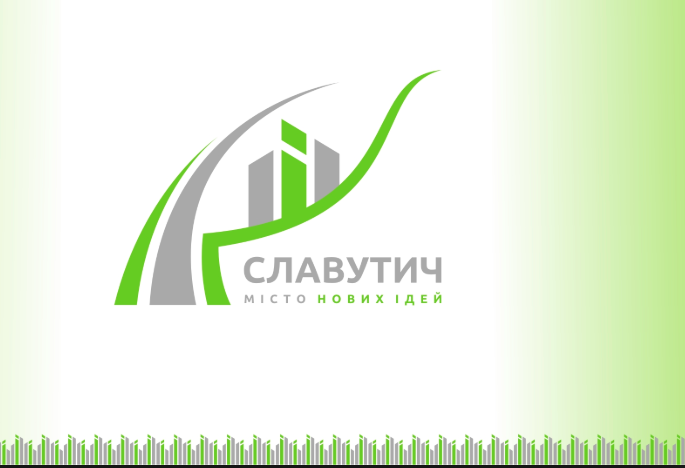 – We are fated in the contemporary world, because something will always remind something else. The simpler the form the more alike the things will be. But the most important is whether Vinnytsia is really “A City of Ideas”. I believe in this. Branding of cities is a competitive struggle. A challenge Vinnytsia is facing, like any other city, is to prove out that it is a city of ideas indeed.

Apart from a new brand, Fedoriv team presented a new travel website for Vinnytsia – vinnytsia.city. In addition to key information for tourists (where to go, where to eat, where to stay, and what to visit), it includes basic descriptions of the new brand design system and the forms of its possible usage: in graphic and video format. 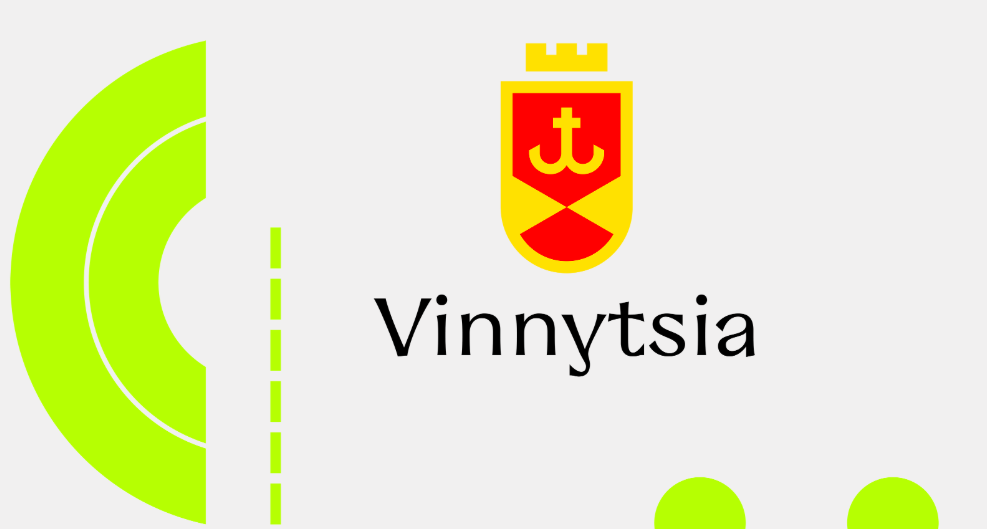 It also explains and demonstrates the origins of such branding colours, why the emblem has been altered specifically in this way, and the fonts available for free use.

“Everything we do in this area we make open-source. We call for every Vinnytsia citizen, and particularly, entrepreneurs, to actively use this brand in all life activities”, – Vitaliy Pogosyan, Director of Economics and Investment Department, explains.

Besides, the website also has an interesting “Vinnytsia generator”: a special service with the help of which one can write any word by using a fantasy font which was custom designed for Vinnytsia.

We tried to write the word Vezha in this font, and look what we have. Interestingly, one and the same word is shown in a different format, just look at it:

In the end, Andriy Fedoriv explained the purpose of the whole story:

– The aim of this brand is to enhance the tourists’ emotional bond with the city. People feel happy with simple things: when there is a place for a cool selfie, when there are places where they can have a good dinner. They are pleased with the idea that their children will tell about their trip to Vinnytsia in their school or kindergarten. This is especially important when speaking about the tourists who cannot afford themselves to book a private jet and go somewhere far away. We speak about the people who simply have a family, have a weekend, have train tickets, and just decide where to go at the weekend: to Lviv, Odesa, Chernivtsi, or, perhaps, to Vinnytsia?…
﻿

END_OF_DOCUMENT_TOKEN_TO_BE_REPLACED

Founding Meeting of the Ladyzhyn Business Club Was Held