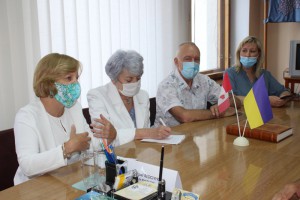 On August 17, in the framework of the development of the Marketing Strategy, representatives of PLEDDG, led by Senior Governance Advisor Laura Hagg, arrived in Khmilnyk.

After the discussion on the creation of the Khmilnyk brand concept, which was held in a World Café format, Mayor Serhiy Redchyk held a meeting with the PLEDDG partner delegation.

Citing successful Canadian examples of administrative and territorial reform, Laura Hagg asked the mayor about the challenges Khmilnyk may face as a result of integration with other communities, what are the city’s top priorities in community development, how will it balance its revenues and expenditures, and develop common values in communities already in an integral association.

Mayor Serhiy Redchyk said that as a result of territorial unification, challenges aren’t to be expected, they are to be responded to in a concise fashion, the main emphasis should be placed on the balanced development of communities, on continuous development, on seeking a balance of efforts and compromises in fulfilling the expectations of the community and reaching consensus and public wellbeing.

Laura Hagg said that she had read the Resort Development Strategy and that she believed that the document was of high quality, detailed, and could serve as a roadmap to oversee local economic development.

In response, the mayor added that the city emphasizes the touristic aspect of its development, but this priority requires more work to be able to declare the uniqueness of the resort area, participate in tourist fairs, exhibitions, advertise health services, and talk more about their advantages.

“We are happy that PLEDDG helps us to develop a marketing strategy, to create the concepts of the brand and the logo, which we have approved, but not organized in a brand book. This is very important for us because this way we will improve our image more, tell more about our urban identity and our resort hospitality,” said the mayor, summing up the conversation.

Before leaving, Laura Hagg eagerly made an entry in the Book of Honorary Guests of Khmilnyk and thanked Mayor Serhiy Redchyk for a pleasant conversation.