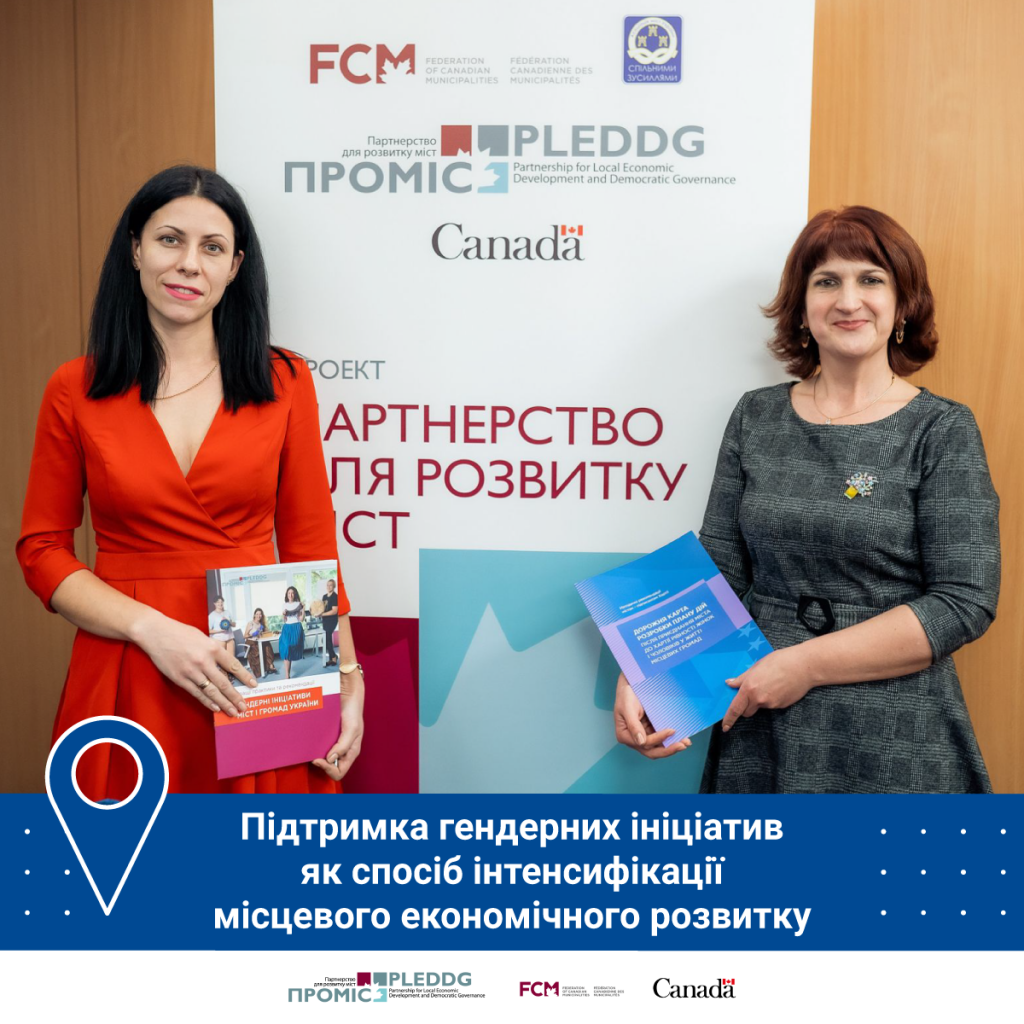 For 5 years, PLEDDG has supported important initiatives, adhering to the principles of equal rights and opportunities for men and women. This support includes assistance in the implementation of gender-balanced urban development strategies and programs, as well as funding for gender-oriented initiatives, support for women’s entrepreneurship, and women’s participation in electoral processes.

One such area of ​​support for gender-oriented initiatives is the Small Grants Program, which is implemented by PLEDDG together with the Association of Ukrainian Cities (AUC). The program has been implemented since 2017 and has financed the implementation of 38 projects from all over Ukraine in four years. In addition, under the SME Development Fund program, PLEDDG supported more than 40 projects submitted by NGOs and business associations, which were aimed at supporting women and vulnerable groups through inclusive business development.

Thanks to the competition of short-term initiatives held in 2020, PLEDDG, together with the AUC, supported 13 initiatives that promote women’s participation in local economic development. Organizations from such cities as Kyiv, Lviv, Poltava, Melitopol, Bucha, Irpin, Merefa, Pervomaisk, as well as Manevychi, Stanytsia Luhanska, Sataniv, Sokolivka took part in the implementation of the projects. The projects are aimed at the development of women’s business, training in marketing and promotion, psychological support for women, gender analysis of community development, which will later form the basis for creating targeted programs and strategies to ensure gender equality in social and economic life.

Among the achievements of the projects supported by the competition is the development of gender passports of Poltava and Kyiv, the promotion of successful local women’s practices, and most importantly, the creation of new opportunities, hope, and self-confidence for women in both large cities and small communities.

The global pandemic has affected the economic situation of almost all areas of life. The risks of the economic crisis have become especially acute for women, who traditionally carry double the social burden. One of the projects supported by the program is “Psychological Support of Women Through Increasing the Capacity of Centers for Social Services.” The aim of the project is to provide high-quality psychological support to women, which is preceded by the training of representatives of urban social services in special short-term support techniques.

According to Olha Nemanezhyna, Head of the “Council of Women`s Initiatives” NGO that implements the project:

”A custom-made mixed method of coaching allows a woman who seeks help to develop a new perspective and thought patterns about the situation that worries her in just 4 meetings. This method does not force a woman to plunge into painful experiences again, but on the contrary, it creates new sources of inspiration and vitality based on her own positive experiences. We now have 100% positive feedback from participants, as well as the first effective results. Thus, thanks to participation in the coaching program, an entrepreneur from Kharkiv, who previously lived in Donetsk and was forced to quit her business and got almost despaired about her business prospects, was able to find faith in her own strength and return to her favorite business.”

The presentation of the project results took place on November 24. The public presentation was attended by the Deputy Head of Development Cooperation of the Embassy of Canada to Ukraine Bronwyn Cruden, PLEDDG Project Director Oleksandr Kucherenko,  Executive Director of the Association of Ukrainian Cities Oleksandr Slobozhan, Head of the “Council of Women’s Initiatives” Olha Nemanezhyna, and Project Manager Anastasiya Popsui, as well as specialists and experts were involved in the implementation of the project. The video of the presentation can be viewed here.

As noted by PLEDDG Project Director Oleksandr Kucherenko during the presentation:

“The project has become very relevant in the crisis situation of the pandemic, from which women suffer in the first place. We are grateful to our partners: the NGO “European Assembly of Women-Deputies”, “Council of Women’s Initiatives”, the AUC, for the initiation and implementation of this idea, and we are happy to have a part in its results. It is very important that the project has a multiplier effect — the training was provided to women-psychologists who work in social service centers in different parts of Ukraine and will be able to implement this model of assistance in their field.”

Communities in small towns and villages are also suffering from the economic consequences of the pandemic. Halyna Yerema, project manager of the “Economic Development of Vyzhnytsia Territorial Community Through the Involvement of Active Women and Girls” from the Chernivtsi region, said:

“For our organization, as well as for the Vyzhnytsia community, this is the first experience of implementing a gender-oriented initiative. During the implementation of the project, we faced a number of challenges, the most difficult of which was the distrust of women themselves to the possibility of change for the better, which led to a lack of initiative or requests for help from them. We had to adapt quite quickly, and together with another organization we bought materials for needlework and combined the gender theory with hands-on training. The participants of the project had the opportunity to relax with joint needlework and began to share their worries and expectations, and some of them managed to find inspiration for their own work.”

The experience of Vyzhynytsia ATC is not uncommon, women living in villages usually have an entrenched stereotype of the distribution of priorities of their time, which rarely provides for additional earnings or hobbies. Now, thanks to training at the women’s leadership school and experience in handicraft, the project participants have realized that they can make money by selling their own products and thus be more independent. The initiators of the project are not going to stop, the group of active women of the community has also been joined by businesswomen — owners of a hotel, a bookstore, and are working on the establishment of a mutual assistance network.

The first implementation stage of the project, the study of the experience of European cities, was carried out during January-April 2020. Within the framework of this stage, through cross-examination of open data, focus groups, and consultations with experts, a methodology has been created that allows tracking the city’s gender gaps in real-time and responding to them accordingly.

Larysa Verbytska,  Project Manager of the “Kyiv Gender Passport”, told about its implementation:

“The UN Recommendations on the Implementation of the European Charter for Equality between Men and Women contain more than 100 indicators for analysis. We selected our library of indicators, the most relevant ones for Kyiv, and for each of them we identified the sources of information and the possibility of their verification. This makes it possible to objectively formulate urban development policy, target programs, and respond quickly to the needs of women and men.”

The second stage of the project is underway, the idea of ​​creating and implementing a Kyiv gender passport is actively supported by the city authorities, during which a public presentation “Kyiv Gender Passport – a Tool for Implementing an Equal Opportunities Policy” took place on September 10.

The objectives of building local capacity through women’s participation in local economic development, eliminating gender discrimination in the labor market, expanding economic opportunities and the development of women’s entrepreneurship, expanding women’s participation in local decision-making are cross-cutting for PLEDDG. The long-term multiplier effect of the implementation of initiatives aimed at supporting women and vulnerable populations testifies to the timeliness of these changes in response to global challenges and the needs of Ukrainian communities.