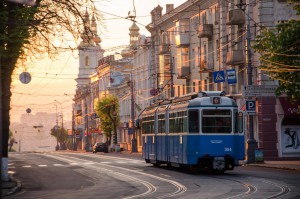 Khmilnyk and Vinnytsia are two cities in the Vinnytsia region that took the first and second places respectively in PLEDDG’s rating of democracy of Ukrainian cities. Also, the city of Zhmerynka took tenth place.

According to the Decentralization website, the study called “City Democracy Index 2020: Report on the Assessment of the Status of Implementation of Local Democracy Instruments in Local Self-Government Bodies of PLEDDG Partner Cities”.

It was noted that the analytical document showcases the best practices of implementation of local democracy instruments in Ukrainian cities. The report reflects the results of the assessment of the state of implementation of local democracy instruments, which provide procedures for involving residents in planning and decision-making, transparency of the activities, accountability of local self-government bodies and officials of 16 PLEDDG partner cities.

The top ten of the most democratic cities ranking according to the study looks like this (maximum score is 190):

What was studied and what were the results?

During November-December 2019, 22 instruments of local democracy were studied on 190 indicators.

The leaders in the quality of local democracy procedures were: Khmilnyk – 66%, Vinnytsia – 61%, Ivano-Frankivsk – 51%. The worst situation with the regulation of local democracy is in the cities Ladyzhyn – 3%, Yaremche – 23%, Energodar – 28%.

In particular, the instruments for the involvement of residents in the planning and decision-making of local self-government bodies were studied: provisions for holding public hearings; public consultations, electronic petitions, participatory budgeting; support and development of public self-organization bodies; urban programs for the development of public participation; interactivity of the city council website; involvement of residents in the creation of the local budget or budget regulations.

In this category, Khmilnyk scored 74 points, and Vinnytsia got 67. 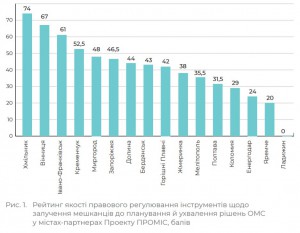 In this category, Kremenchuk and Khmilnyk are the only cities whose normative documents introduce online webcasting of city council meetings, its executive committee and deputy commissions to the fullest, and video archives of all meetings are created and stored on the official website.

At the same time, Vinnytsia has become one of the cities where all normative legal acts regulating the work of local self-government bodies and community development are published on the website of the City Council.

In this category, Vinnytsia received 22 points, Khmilnyk scored 23. It was noted that only these cities ensured the right of citizens to public examination via procedures. 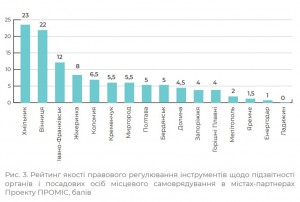 An electronic resource “Map of Vinnytsia Community Funds” has also been created on the website of the Vinnytsia City Council, where a resident can see the sectors, types of works, and territories/places where works are carried out, which are funded by the city budget.