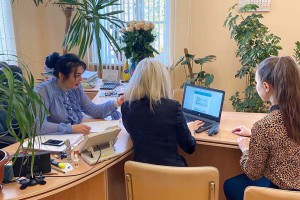 A gender passport of the city has been developed by the Department of Economics and Investment of the Poltava City Council at the final stage of the implementation of the project “Increasing the Influence of Women in the Advancement of Local Economic Development as a Guarantee of Successful Implementation of Gender Policy in Poltava” as part of the funding of gender-related initiatives carried out by PLEDDG together with the Association of Ukrainian Cities (AUC).

The city’s gender passport is a comprehensive document based on research into various areas of the city’s activities, including education, healthcare, business, industry, local self-government, and the involvement of women and men in the latter. The gender passport allows for more balanced planning of urban development, taking into account the needs and demands of men and women, more efficient investment in the educational, cultural, and socio-economic spheres of the city.

Previous successful experience in developing gender passports for cities such as Kharkiv, Lviv, and Zhytomyr with the support of PLEDDG has made it possible to effectively organize the work of experts in analyzing and organizing demographic data for the city of Poltava. Thus, the content of the gender passport of Poltava is based on current information of the Main Department of Statistics in Poltava region, Poltava city district branch of Poltava regional employment center, executive bodies of Poltava city council, higher education institutions of Poltava.

Among the key facts of the gender passport of Poltava: the average age of men has increased to 42 years, and women to 44 years, among doctors of all specialties in the city women, are prevalent (85.7%); in the gender structure of local self-government in Poltava, almost three quarters are women (74.0%), however, the higher the category of positions in local self-government, the smaller the percentage of women. Higher education institutions are characterized by a situation in which women are more likely to represent the teaching staff, while men are professors and administration.

“The development of the gender passport of Poltava,” commented Vita Klymenko, Director of the Department of Economy and Investment of the Poltava City Council. “Was the final stage of the implementation of the project “Increasing the Influence of Women in the Advancement of Local Economic Development as a Guarantee of Successful Implementation of Gender Policy in Poltava”, which is being implemented with the support of the PLEDDG and the AUC. Workshops on business literacy, business consulting, and a forum for women have already been held as part of it. The developed gender passport, in turn, is an important step towards the introduction of gender-oriented budgeting in the city of Poltava and expanding its opportunities for socio-economic growth.”