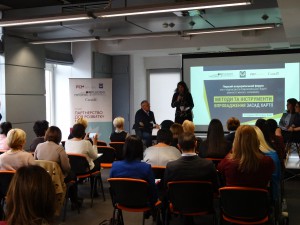 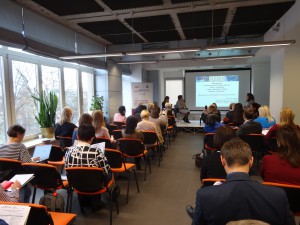 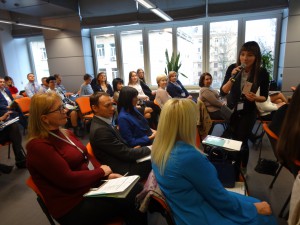 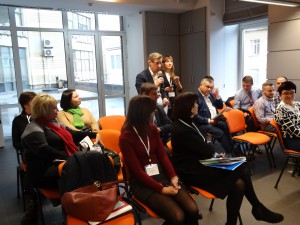 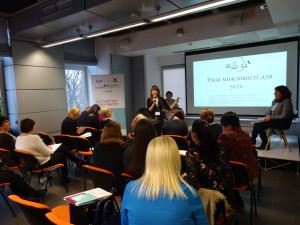 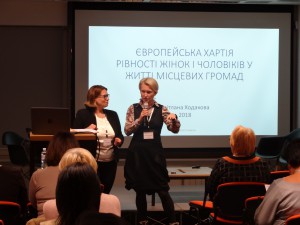 On December 6th, 2018, the First All-Ukrainian Forum of Signatory Cities to European Charter for Equality of Women and Men (Charter) took place in the framework of PLEDDG Project. The aim of the Forum was to provide cities with methodological support in joining the Charter, as well as help the participants gain an insight into implementation practices and еру monitoring of implementation measures.

The European Charter on Gender Equality is one of the fundamental documents on gender equality, which forbids discrimination on any grounds, such as sex, race, ethnic or social origin, genetic features, language, religious beliefs, political views etc. The Charter calls for European local and regional governments to commit themselves to using their powers and partnerships to achieve gender equality.

Three Ukrainian cities – Vinnytsia, Zhytomyr, and Irpin – have already become the registered signatories to the Charter, having thereby declared their political will to support equal rights and opportunities for men and women at the local level. Over nine cities have adopted their decision to joining the Charter. The signing of the Charter means that local authorities publicly declare their commitment to gender equality.

The Forum participants were greeted by Bronwyn Cruden, Deputy Head of Development Cooperation of the Embassy of Canada to Ukraine. Ms Cruden spoke about active support provided by Canada to Ukraine as regards the implementation of gender equality in all spheres of public life, having presented, in particular, the fundamentals of Canada’s Feminist International Assistance Policy. Valeriy Baranov, Deputy Executive Director of Association of Ukrainian Cities (AUC), and Volodymyr Nyzhnyk, ACU Administrator, National Coordinator for Implementation of Charter, shared ACU’s plans regarding the support of Ukrainian cities in their joining the Charter and implementing its fundamentals. They also explained how ACU had been promoting the Charter. According to Mr. Nyzgnyk, the idea to sign the Charter had come up in the course of discussions held at working meetings of the Committee on Equal Rights and Opportunities for Women and Men of the Association of Ukrainian Cities, activity of which is actively supported by PLEDDG Project.

Olha Chychyna, a deputy of Kharkiv City Council, and Natalia Lysenko, Deputy Director of Labour and Social Policy Department of Odesa City Council, spoke about challenges that had arisen after the decision on joining the Charter. Svitlana Zhavoronkova, PLEDDG Gender Equality Consultant, and Svitlana Khodakova, Director of Vinnytsia Association of Regional NGOs “Open Society”, presented the benefits of joining the Charter for every city as well as a methodology, monitoring and assessment system for implementation thereof.